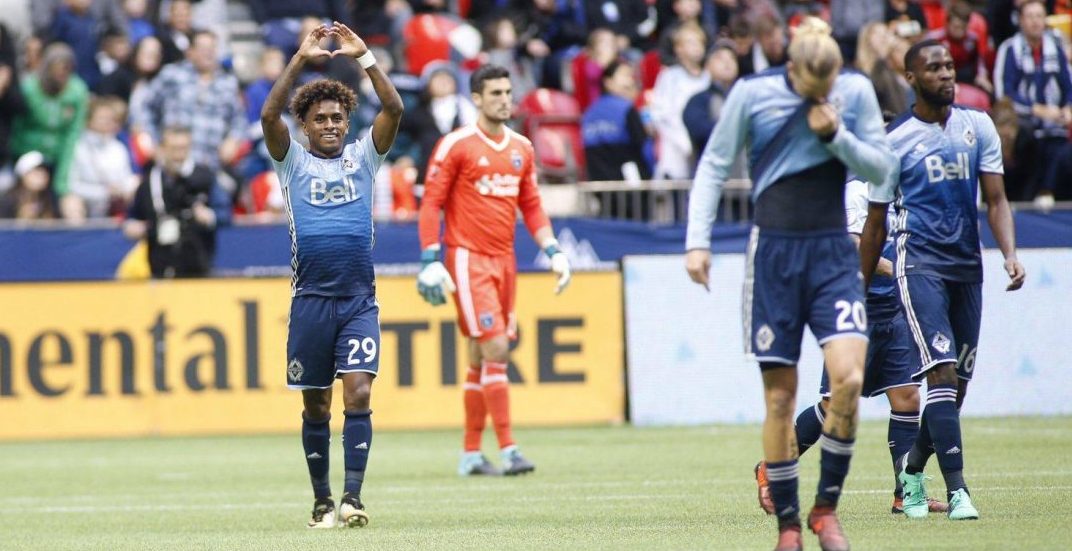 It’s been something of a fun fact for the Vancouver Whitecaps and their blossoming Peruvian star, Yordy Reyna. All of Reyna’s goals in Major League Soccer have been game-winners.

Well, almost all, now. Reyna potted the opening goal of the match against the visiting San Jose Earthquakes after another trademark Whitecaps counter-attack.

And while the ‘Caps would’ve loved to send the sellout crowd at BC Place home with a win thanks to another Reyna goal, it was not to be. San Jose equalized in the 77th minute through attacking midfielder Valeri “Vako” Qazaishvili to both keep their own playoff hopes alive and deny the Whitecaps a chance to clinch first place with a game remaining.

Tremble before the Vancouver counter-attack

Ignore those who fret over possession statistics; the Vancouver Whitecaps of 2017 don’t have the ball for large portions of the match and they don’t really care.

The ‘Caps are plenty happy to sit back, defend, wait for an error and then hit back at speed. With pace and creativity comes a blitzkrieg of chances, usually at the expense of some very confused fullbacks.

There are so many things to note here, so I’ll be brief.

The whole play starts just before the video and feature some truly impressive defensive work by striker Fredy Montero.

Man, look at this work by Montero in the build-up to #VWFC's goal. #VANvSJ pic.twitter.com/oUqPFRiIU3

That’s the kind of effort that wins you the ball and wins games. Now if only the ‘Caps could keep that up for a full 90 minutes, maybe they’d give supporters a touch more confidence going into the playoffs.

Sorry – this is supposed to be the celebratory part of the article. Right then, props to Tony Tchani for the sweet pass to Cristian Techera.

Finally, props to Brek Shea for being a total nuisance to the San Jose backline. Watch his movement again in the video. While Techera and Nerwinski have Salinas all twisted out of sorts, Shea’s movement drags big Victor Bernardez out of position and leaves Reyna all alone for the tap-in.

Speed, creativity, clinical finishing – all ingredients of a lethal counter-attack.

And while that’s yet another example of how Vancouver can be murderous in transition, the question remains: what’s Plan B?

Plan B is… total panic?

Aesthetics aside, counter-attacking is a viable strategy so long as you have an attack to counter.

This is what happens when we sit and wait for counter. Impressed we r on top but not a fan of this style.

When the opposing team buttons up and forces Vancouver to come at them, a change of strategy is required. Right now, it doesn’t look like the ‘Caps have another arrow in the quiver. That leads to some truly inventive moments (the “panic”, as referenced above) like defender Kendall Waston(?!) going full “screw you guys, I’m doing this myself” and trying the blunt force trauma method of forcing a goal.

Obviously, it doesn’t work, but damn if it doesn’t get the crowd hyped and send a message to the rest of the team – try something. Anything! If the big man is willing to go on a lung-busting thunder run from penalty area to penalty area, surely one of his teammates can come up with an inspired bit of soccer to change the game.

In fairness to the ‘Caps, they did try a few things slightly different than the norm, some of which ended in Montero putting a shot on target. Unfortunately, goalkeeper Andrew Tarbell happened to be at said target and absolutely stood on his head to keep San Jose in the game.

It’s going to be a Cascadia showdown for first place in the Western Conference.

With one game remaining in the regular season, the Whitecaps remain in first place in the Western Conference with 52 points.

Behind them, tied on 50 points, are Seattle and Portland – both of whom posted dominant wins in their own matches on Sunday. They’re the only teams that can catch Vancouver.

If you’re new to the MLS playoffs, here’s how it breaks down:

Vancouver plays in Portland on Sunday. A draw guarantees a first-place finish for the ‘Caps, since they hold the tiebreaker (wins) on Seattle.

Seattle meanwhile, will host the second-worst team in the West, the Colorado Rapids.

At worst, Vancouver can fall to third place, which would force them to play in the knockout round against the sixth-place team (currently San Jose). The silver lining there is the match would be back at BC Place, where a raucous friendly fanbase is always welcome in a do-or-die match.