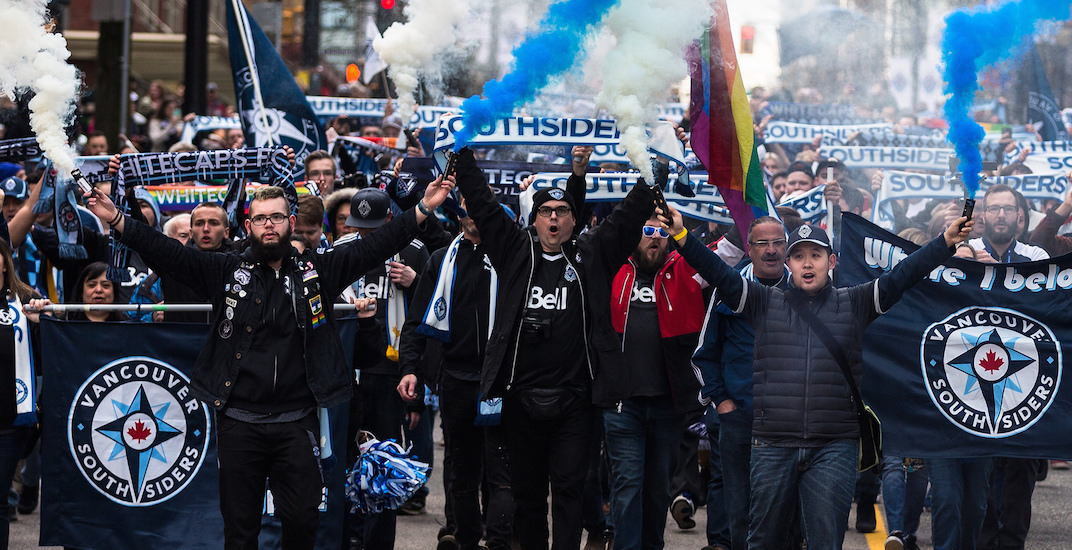 It’s been a tough start to the 2018 MLS season for the Vancouver Whitecaps.

Prior to defeating Real Salt Lake 2-0 at BC Place on Friday night, the ‘Caps had been bouncing up and down through the Western Conference standings over the past month.

It was a must-win match for the Whitecaps, who moved back up to second in the Conference with the victory – though every other team in the West has at least a game in hand on them.

Although on paper things are looking good for the ‘Caps, off the pitch there is much unrest among an embittered fanbase. Perhaps that was bound to happen after three straight losses, capped off with a 6-0 embarrassment in Kansas City last week.

“Frustration began to boil over with a record setting MLS-era 6-0 loss away to Sporting Kansas City last week,” said Southsiders vice president Peter Czimmermann in an interview with Daily Hive. “‘Our All. Our Honour.’ Last week was anything but honourable.”

The rout at Kansas City last week quickly became a rallying point for frustrated supporters, many of whom took to social media in the aftermath to voice their displeasure.

Dear @elonmusk: Please buy @WhitecapsFC, give us a coach and a budget, and put the current senior management team on the next Tesla to Mars. Sincerely yours, 20,000 season ticket holders. #SKCvVAN pic.twitter.com/RW2NvCrZ4s

I want that hour of my life back @WhitecapsFC. I could’ve spent that time finding cure for cancer or watching some puppy videos instead of this 💩show. ☹️#SKCvVAN

While angry sports fans venting on social media is nothing new, the venom aimed at the Whitecaps’ management and coaching staff did not wane in the days after the stinging beatdown.

In protest, the Southsiders decided to do things a bit differently for Friday’s game. They didn’t bring drums or hang banners, and they amended the words to many of their popular songs/chants.

With exasperation and discontentment reaching peak levels this week, the Southsiders – the largest supporters group for the Vancouver Whitecaps – took things a step further on Thursday by posting an open letter to other Whitecaps fans on their website:

To our fellow Supporters,

Last Friday, our club reached a critical impasse in its football endeavours. We understand how frustrated you are and we stand with you. The Whitecaps ownership, management, and coaching staff need to recognize and acknowledge that the “meh, good enough” model of football they are putting on the pitch week after week, year after year, is quite frankly, NOT good enough. FINE. LINES. They are doing the players and the supporters a disservice in their continued complacency and the time has come for the supporters to stand as one and say, “We demand better.”

The Vancouver Southsiders hold firm in our belief that when it comes to football, our city and our nation are out of step with the rest of the world. We refuse to conform to Vancouver’s inherently quiet and reserved nature. We are not fair-weather Vancouver “fans.” We are fierce in our support for our players on the pitch and will fearlessly lead fellow supporters by example. Rule #1 of the Southside is to ‘Always support the Caps’ and we intend to continue to support our boys in Blue, White & whatever colour you want to call the Unity kit, and encourage all supporters to do the same. The players are in just as tough of a position as we are and they need our voices now more than ever.

This week, our match day experience will have a slightly different look, sound, and feel. Our March to the Match will leave Victory Square at 7pm giving us just enough time to make it into the stadium for kickoff. There will be an amended song sheet (now with more four letter words!) available in the GA section (252) so please stop by and pick one up. There will be no drums or on-pitch Capos. We will chant & cheer our way through the full 90 minutes, as we always have, to let our players know we still stand WITH them and FOR them. That we intend to hold ownership, management and coaching staff to a higher standard. If you are efficient, you get “results.”

The issues the hardcore fans have with the Whitecaps are complex. Many point to the fact that the club is unable to bring big name players to Vancouver. Others are upset at the lack of playoff success, and others dislike the bland style and the lack of scoring chances created by Carl Robinson’s brand of soccer.

The Southsiders were as good as their word on Friday night.

No drums, no flags, and no banners save a single “Fine Lines” banner mocking Robinson’s overuse of the term during press conferences. They even issued a special song sheet to their members intended to convey their sentiments in a cynical and dry humour that is unique to soccer supporters the world over.

Make sure to keep your ears peeled for some special chants tonight from Vancouver supporters who are apparently quite displeased. pic.twitter.com/zjD1jzj5kg

Their actions may seem harsh and incendiary, but the Southsiders insist it is just their way of bringing attention to their concerns and holding the Whitecaps management group accountable.

“We will support the players on the pitch,” said Czimmermann. “We want them to succeed, however when soundbites from post match press conferences repeatedly fail to take responsibility and point blame they begin to sound like excuses.”

At least for the time being, the win over RSL on Friday has taken a bit of pressure off Robinson and his beleaguered team.

“I know we’ve got a good group in there and what we lack in quality sometimes we make up in spirit,” said a relieved looking Carl Robinson after the match. “I thought the last 30 minutes showed what we are about.”

It took until the 75th minute before Vancouver found the back of the net. But even that wasn’t all positive, as Cristian Techera earned his second yellow card of the match and was ejected for taking his shirt off during his goal celebration following his penalty kick goal.

Soooo, Techera scores from the spot…but then gets his second yellow for taking off his jersey in the celebration. #VANvRSL https://t.co/0uP4Q9vmKQ

Reactions to the Caps’ latest win were somewhat varied throughout the fanbase, ranging from relief to ambivalence.

Good win for the Vancouver Whitecaps today – 2-0 vs Real Salt Lake. FINALLY scored a goal at home!! It's a solid 3 pts, but let's not get carried away. Performance wise, it wasn't great. Salt Lake isn't an incredible team and the Caps were kinda lucky to have won. #VWFC #VANvRSL

I’m never been like this but I’m not even HAPPY with this result.. another unimpressive performance with a pk gwg highlighted by a moment of COMPLETE INCOMPETENCE.. that only serves to save robbo’s (and the duze’s) skin for another day #vwfc

The past month has been a difficult one for the Whitecaps and their fans. Robinson and company still face a challenge moving forward as the Welshman will have to navigate a series of tricky matches missing several key players through injury and suspension.

While the attention has firmly been fixed on the issues plaguing the Caps both on and off the field, the more positive fans will be crossing their fingers that the team has finally snapped out of their early season funk.

However, in the meantime it appears the deadlock between the club and some of their most hardcore fans will continue. On the pitch, the matches are being decided by razor thin “fine lines,” but off the pitch they remain “oceans apart”.