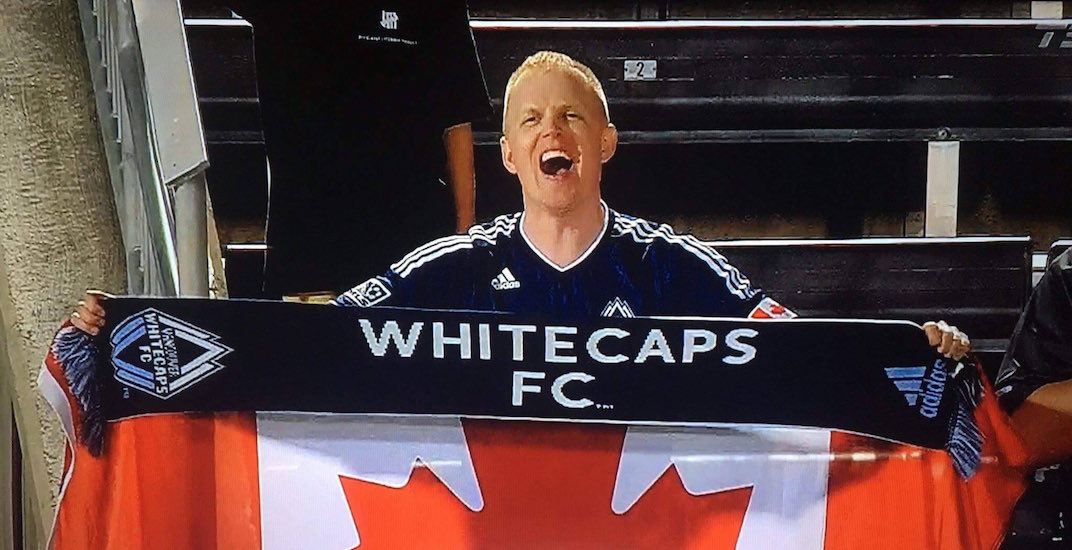 This is fandom taken to another level.

Kristjan Aug is prepared to go further than most for his love of the Vancouver Whitecaps.

The 29-year-old’s mission is to see Whitecaps FC play in every stadium in MLS, and he’s well on his way. He’ll even do it alone, as he did at a game in Colorado last season.

One #VWFC fan (@krisaug5) in the away section in Colorado. Respect to him for making the long trip for a Friday match #MLSAway #CapsOnTour pic.twitter.com/9knJRWJqt4

He’s brought people with him before – like when he literally flew an entire contingent of supporters to a match in Seattle.

“I love travelling and I love the Whitecaps,” Kristjan told Daily Hive. “Away games just make sense. I get to explore new cities, meet new people, watch a match, and eat and drink the local specialties. It’s a good way to have a mini-vacation.”

He’s been to 18 of 23 MLS stadiums already, traveling to places like New York, Columbus, Orlando, Chicago, Minnesota, and Los Angeles.

Even more amazing? Matches in Vancouver are now road games for Kristjan, who moved to Toronto three years ago. That hasn’t stopped him from getting to matches at BC Place though, as he attends about five Whitecaps matches in Vancouver every season.

He says he flies to about 10 matches (Vancouver or otherwise) ever year.

“I typically travel alone, but am not the only one at games. I travel alone usually because the people I know come from other cities and usually like to spend more time in the city than I do.”

Kristjan’s most recent trip saw him enter the imposing Mercedes-Benz Stadium in Atlanta for his 33rd away match. His job as a pilot grants him some flexibility in requesting days off, so being able to nip down to Georgia isn’t that out of the ordinary for him.

It was out of ordinary to his friends and family, though, back when Kristjan started his stadium-visiting sojourn. It took some explaining to overcome the confused questioning of acquaintances. Now, it’s just an accepted part of who he is – an online mini-celebrity for Whitecaps fans on social media.

“They just roll with it now and enjoy following my travels. They’re all very nice and supportive of what I do – and that’s what I appreciate more than notoriety.”

Well… it’s not exactly going according to plan, but on the plus side, it’s an amazing atmosphere! pic.twitter.com/hUPjlpK5nl

While the game may have been a write-off – a 4-1 loss – the Whitecaps supporter continued to show his support facing up against 45,000 Atlanta fans in one of the loudest stadiums in MLS.

“The fans were all very friendly and welcoming with their Southern hospitality,” he said. “The fans were boisterous, had great levels of participation, and the noise generated was incredible.”

“It felt like a combination of European style support, but with the visual and horn celebrations of a hockey game. It was unlike any other away match I’ve been to.”

Here's a better shot (kid behind @krisaug5 was warned about Canadians!) pic.twitter.com/1jRtEe8nxj

The soccer superfan also knew he’d be alone in his corner, having been told by the Colorado front office that while he might not be only Whitecaps fan in the stadium, he’d certainly the only one with a ticket in the supporters section.

“It took me a long time to hype myself up for that match. Being alone out there can be quite intimidating.”

While he’d be alone waving his Whitecaps scarf and Canadian flag in person, he’d be far from alone in spirit.

“I had an outpouring of support on social media. That showed me that even if I was the only one in the stadium, I had hundreds of ‘Caps fans behind me. I had them with me in spirit and I channeled that into the energy and support I showed in stadium.”

“A few beers helped, though.”

Kristjan’s dedicated was rewarded with a 1-0 victory, courtesy of a late Brek Shea breakaway.

That wasn’t his best memory of the game, though. That honour goes to the interactions he had in the stands with the Colorado supporters, many of whom even came over to thank him for making the long journey and lending his enthusiasm to the atmosphere.

Kristjan even helped a group of 10-year-olds get a pro-Rapids chant going, encouraging other Colorado supporters to join in – a move that might seem traitorous on the outside until you understand his motivation.

“It was in the name of helping to spread supporters culture and foster a new generation of people who might become capos or help paint tifo for organized supporters groups. I have no shame in that.”

There was also the small matter of overnight fame.

“Post-match, I was informed by various people of the coverage I got by TSN. My brother in Australia knew about my ‘fame’ before I even did! I found that MLS had written an article about me, and then a writer at the London Telegraph did an email interview with me.”

It had to be email, too – Kristjan had lost his voice screaming into the Colorado night.

“I’m currently planning one away trip per month to finish off my list,” says Kristjan. “My next away match will be Kansas City in April. As it’s a Friday night in Kansas, there is a good chance I could be alone like in Colorado.”