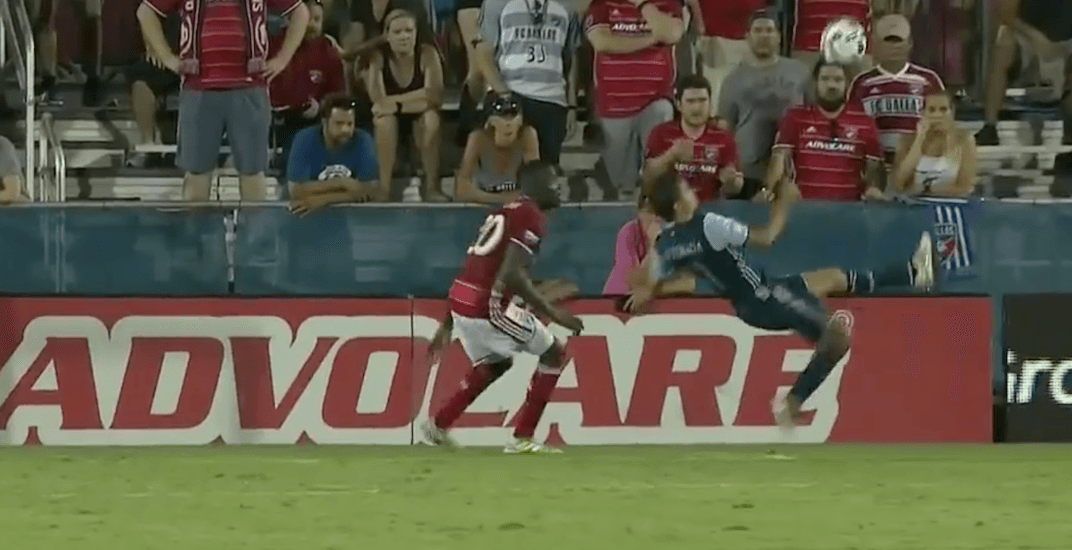 Spectacular goals, a phantom penalty kick, and red card made for a wild match between the Vancouver Whitecaps and FC Dallas down in Frisco, Texas on Saturday.

Nicolas Mezquida’s bicycle kick wasn’t the most important goal of the game, but it certainly was the most spectacular.

Let’s watch that one again:

That goal was the cherry on top, giving the Whitecaps a 4-0 road win over one of the best teams in Major League Soccer.

Saturday’s victory was a historic one for Vancouver, as the win marked the first time they’ve earned points while visiting FC Dallas.

Simply, it was the biggest win on the road by the Whitecaps since joining MLS.

Whitecaps FC manager Carl Robinson did a major overhaul to his starting XI compared to the team that was bitterly defeated at home last weekend against Cascadia rivals Portland Timbers.

If six changes to the lineup were not enough, the Welsh Tactician also tried a formation that he has rarely deployed since taking the Whitecaps helm. Robinson stayed away from his tried and tested 4-2-3-1 and his recent dabbles with a 4-3-3, choosing instead to line his troops in a 4-4-1-1 with Yordy Reyna sitting behind Fredy Montero.

This deployment allowed the one nicknamed “Magic” to play freely up top. The Peruvian was able to drop deep to get more involved on the ball and drift wide when space opened, all without being burdened with defensive responsibilities as he had Matias Laba and Tony Tchani behind him to reliably shield the defence.

The new formation and the personnel deployed to execute it worked wonderfully throughout the match. The physicality and speed Ibini and Shea provided on the wings, combined with a noticeable willingness to attack and press high, and team’s defensive responsibility made it very hard for FC Dallas to play the possession-based football that makes them so dangerous.

The ‘Caps efforts were rewarded early when Bernie Ibini opened his goalscoring account for the Whitecaps at the 18th minute when he rifled a low shot from outside the box that beat FC Dallas keeper Jesse Gonzales.

The goal was an important landmark for the Australian native.

It was also a memorable one for the Blue and White as it was the first time they have made it onto the board at Toyota Stadium since the playoff knockout match in 2014 (a game the Whitecaps ultimately lost 2-1 after referee Mark Geiger awarded a controversial last minute penalty to Dallas).

Speaking of penalty kicks, the Whitecaps were the recipients of an early Christmas gift when referee Baldomero Toledo concocted a phantom foul on Fredy Montero inside the box, much to the chagrin of FC Dallas midfielder Kellyn Acosta.

Montero took on the responsibility from the spot and didn’t miss this time, doubling his team’s lead early in the second half.

A red card was given to FC Dallas after Carlos Gruezo elbowed Reyna in the face while the two players collided and went to ground.

The red card changed the dynamic of the match and spaces opened up for the Whitecaps. Montero found himself with some space in the box and the Colombian made no mistake making the score 3-0.

It is great news for the ‘Caps to see their Designated Player scoring once again. It should be a much needed boost of confidence for Montero who has, at times, looked frustrated by his lack of scoring. Perhaps more importantly, the early signs of chemistry between Reyna and Montero should have Whitecaps fans salivating about what could be with this team going forward.

The win brings Vancouver’s record to 9W-8L-3D and keeps them above the playoff bar in the Western Conference. They’ll play their second straight road game Saturday in Colorado.