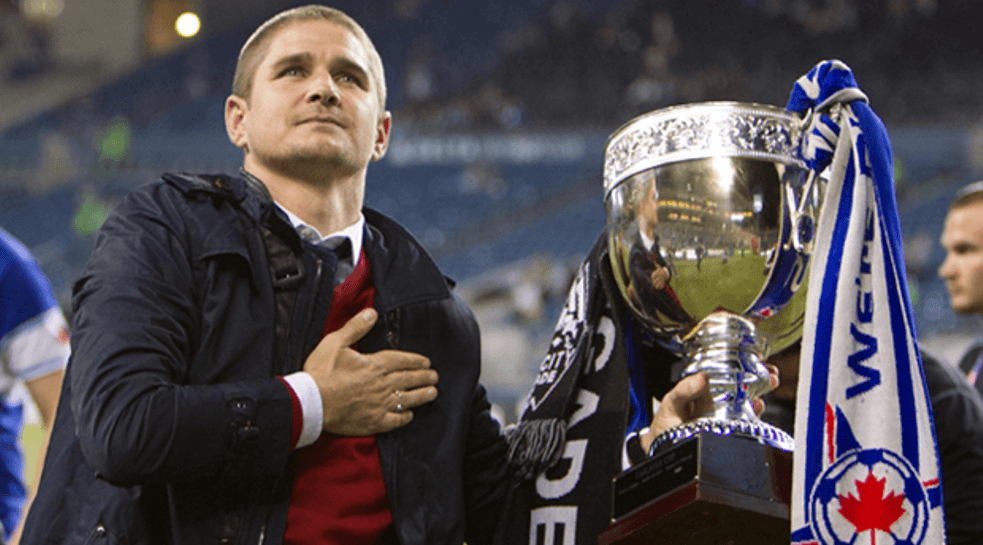 It’s been a summer to forget for the Vancouver Whitecaps and their fans.

Since the ‘Caps spectacularly lost the Voyageur’s Cup Final to Toronto FC on June 29th, the Blue and White have won just one game in their last nine Major League Soccer matches, and are winless in their last six.

The ‘Caps are riding a four-game losing streak, and are plummeting through the Western Conference standings at near free-fall speed. With the season seemingly spinning out of control, disgruntled fans have been calling for change at almost every level of the Whitecaps’ hierarchy.

A timely 3-0 beatdown of Sporting KC in CONCACAF Champion’s League action on Tuesday night has eased some of the pressure, and perhaps has given fans hope that there is still some fight left in the Whitecaps.

But now it’s back to the reality of the MLS grind for Vancouver.

The Whitecaps next play the Galaxy in LA on Saturday night, and you can bet your bottom dollar that Bruce Arena and the Galaxy will be much tougher opponents for the struggling ‘Caps.

Won a game and it feels so goooood. 💙 #VWFC

With the latest 2-0 loss to Sporting Kansas City in MLS league play this past weekend, there have been repeated calls for the ‘Caps to pull the plug and fire head coach Carl Robinson.

On the surface this would appear to be the easy fix for a team that has scored just three goals since the middle of July, and who have given their fans very few positive moments to cheer about.

Sure, let’s fire Robinson. After all, why not?

Oh, the (in)convenient memories of the Vancouver sports fan are short and soon forgotten.

This is Robinson’s third year in charge of the Whitecaps, and under his guidance Vancouver made the playoffs two years running, won a Cascadia Cup, and a Voyageur’s Cup.

The ‘Caps set a number of team records in 2015 before finishing second place in the ultra competitive MLS Western Conference, earning a first-round playoff bye and a coveted home playoff game.

@markjrdailey 2nd in the west last year. Disappointing playoffs but still. One bad year is being taken too harshly by many fans. #RobboStays

The squad that Robinson inherited after taking control from Martin Rennie at the end of 2013 is far different than the one that the Welshman has been diligently building over the past couple of years.

Only five players, most notably defender Jordan Harvey and goalkeeper David Ousted, are still with the team. Not only are most of the Rennie-era Whitecaps no longer with the team, many of them aren’t even playing in Major League Soccer.

Long gone are the likes of Nigel Reo-Coker and Daigo Kobayashi, who have (thankfully) been replaced by a host of talented players including, but not limited to, Pedro Morales, Kendall Waston, Matías Laba, and Christian Bolaños.

Under Robinson’s watch the ‘Canadian content’ of the Whitecaps has been radically changed. Midfielder Russell Teibert has been joined by compatriots Fraser Aird, David Edgar, and Marcel de Jong. Add to that the ever growing list of exciting homegrown talent at Whitecaps FC2, and the once guilty Twitter pleasures of #WhitecapsHateCanada has become a thing of the past.

It would, of course, be inaccurate to suggest that it’s been nothing but smooth sailing and halcyon days since Robinson has been in charge.

There was the unfortunate case of Camilo, who transferred himself to Querétaro FC while the newly minted Robinson was still picking out his parking stall at Whitecaps HQ just days after taking the top job.

Then there was the famous end to the 2014 season in which Robinson and the misfiring Whitecaps were faced with ‘5 Cup finals in 5 matches’ to make the playoffs. Thanks to a memorable Kendall Waston header and some favourable results around the Western Conference, the ‘Caps snuck into the playoffs but were quietly dispatched from the postseason only a week later by FC Dallas.

Over the years there have been plenty of criticisms that Robinson it too loyal to his players when they struggle with their form. There is also the the fact he rarely deploys his XI in a formation other than the now familiar and predictable 4-2-3-1, and that he always makes his first substitution of the match at the 65th minute.

These are signs that at the tender young age of 39, Robinson is a coach who is still learning all the facets of his chosen profession. Robinson has shown that he possesses an excellent footballing mind, and if he were to part ways with the Whitecaps, it would be a pretty good bet that the Welshman would not be out of work for long.

This season has been one of untimely injuries, suspensions, and international call-ups. Also consider that core players, many of whom re-signed new contracts last winter, just haven’t been very good for most of this season. A year ago it seemed inconceivable that Matías Laba would be a healthy scratch from Robinson’s team, but we saw just that this past weekend.

Yes, it is alright to be concerned, or even upset with the miserable run of form the Whitecaps have been on the past few months. It’s also fair to be concerned that all the newly signed players haven’t had much of an impact. It is also fair to question the Whitecaps’ policy on the how much money they’re willing to spend to bring top quality players, such as a Sebastian Giovinco, to Vancouver.

The fact of the matter is that while this season thus far has been a disappointment, Robinson and the Whitecaps have not stood idly by, gnashing their teeth and lamenting that things aren’t going their way.

The ‘Caps have addressed their positional needs by either bringing in new players, or by promoting young talent like Alphonso Davies and Brett Levis from within the club. A manager’s job is never done, and whatever happens between now and the end of the year, you can be sure Robinson and his staff will try to improve their team for 2017.

Toronto FC, who for many years had a revolving door on their manager’s office, committed to standing behind head coach Greg Vanney and are finally seeing the results of their faith, and significant financial investment, paying off.

The Whitecaps, too, would be wise to stand behind Carl Robinson, and let him finish what he has started.