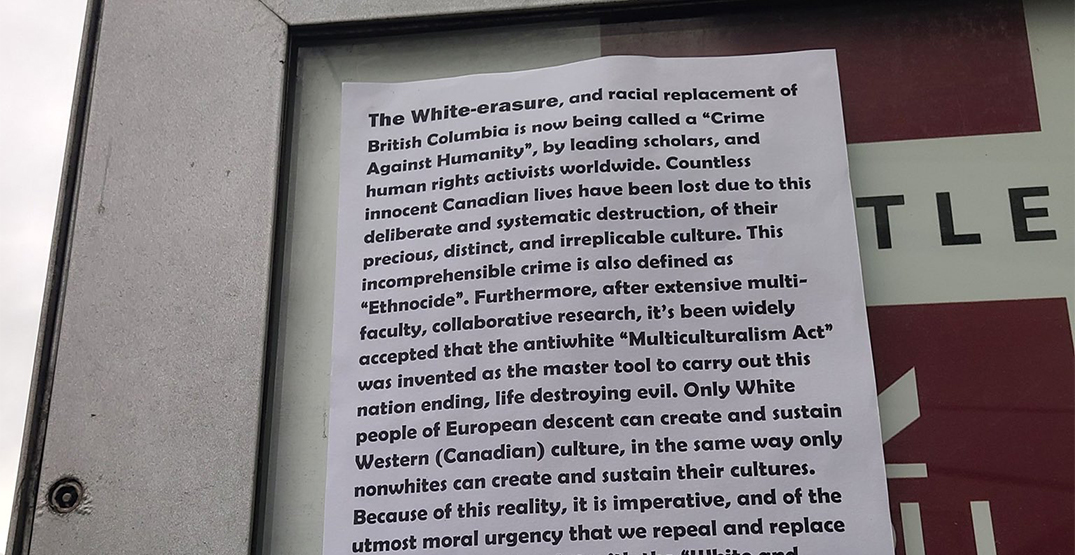 More white supremacist posters have been spotted in Surrey this week, apparently from the same organization that has been placing them near transit hubs for several months.

Back in October, a commuter told Daily Hive that a man putting up the posters for No White Guilt accosted him when he ripped one down near Surrey Central Station.

Now, a woman who identifies herself as Juan Cena on Twitter has spotted another one taped to a bus shelter near King George Station.

Found at a bus station in Surrey B.C. White supremacy exists in Canada. This effects us all. @CityofSurrey pic.twitter.com/y2eIT3UXS7

Transit Police spokesperson Sgt. Clint Hampton told Daily Hive that no reports have been filed about the latest round of posters.

“Whether or not a criminal offence or a breach of policy occurred, the promotion of any form of hate on the Transit system is totally unacceptable,” he said.

Ranil Prasad, the man who ripped down one of the white supremacist posters in the fall, said the man who confronted him accused him of being “anti-white.”

Despite the troubling confrontation, Prasad said he felt he did his “civic duty” by removing the poster.