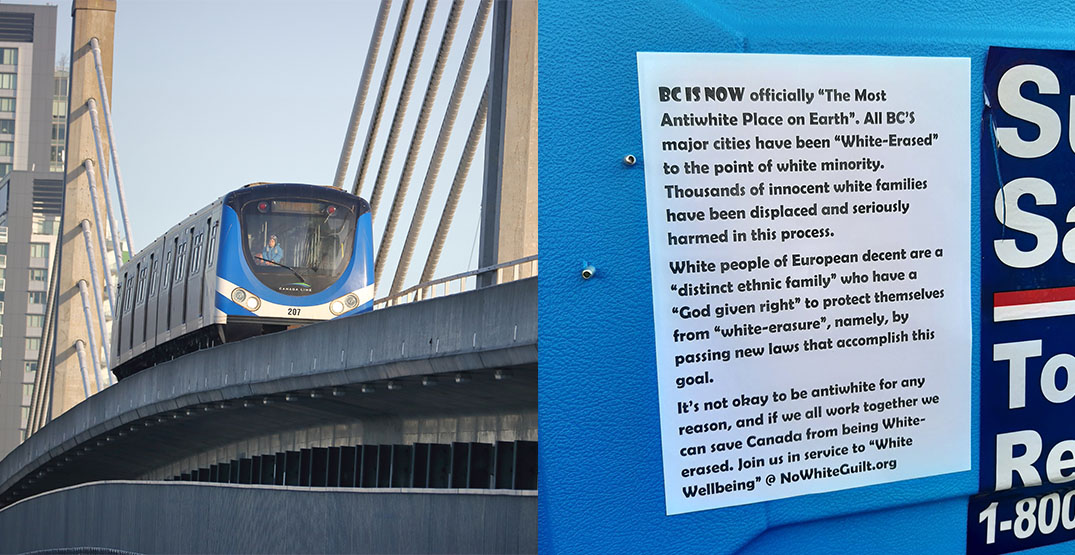 A Metro Vancouver commuter says he was confronted by a man who put up a white supremacy poster at Surrey Central Station on Monday.

Ranil Prasad was getting off the bus when he spotted the man sticking the poster to the side of a porta-potty just after 3 pm. When Prasad stopped to read the poster, he realized it was a white supremacy poster calling BC the “most anti-white place on earth.”

After snapping a photo, Prasad ripped the problematic poster off the porta-potty. As he was walking away, the man who put the poster there accosted him.

“He said, ‘Are you anti-white? Why are you being so hateful?'” Prasad told Daily Hive in an interview. “I said, ‘All right, buddy,’ and I crossed the street.”

Prasad was able to lose the man when a bus proceeded through the intersection and separated them. He got on the SkyTrain, tweeted about the ordeal, and contacted Metro Vancouver Transit Police.

Wish I could’ve gotten it on video, but the whole interaction was maybe 10 seconds long. My adrenaline levels are through the roof!

Prasad wasn’t scared for his physical safety, but said he’s concerned about the message the man was sending, and whether it might convert others to think that way.

He’s seen other problematic posters, including anti-Black Lives Matter notices, ripped off at the station before, which prompted him to remove this sheet of paper.

“I think I did my civic duty,” he said of the decision to take it down.

Transit Police spokesperson Sgt. Clint Hampton said officers responded to the station for reports of two men distributing white supremacist material, but did not find the men in the area.

Passing out or affixing such material on TransLink property is in violation of the transit authority’s policies, and could even meet the threshold for a hate crime of the message is directed at an identifiable group.

“In this particular case the material seems to be focused on a perceived victimization of a ‘white minority’ and does not refer to any other race/ethnicity,” Hampton wrote via email, suggesting the poster would not be considered a hate crime.

“Whether or not a criminal offence or a breach of policy occurred, the promotion of any form of hate on the transit system is totally unacceptable,” Hampton added.