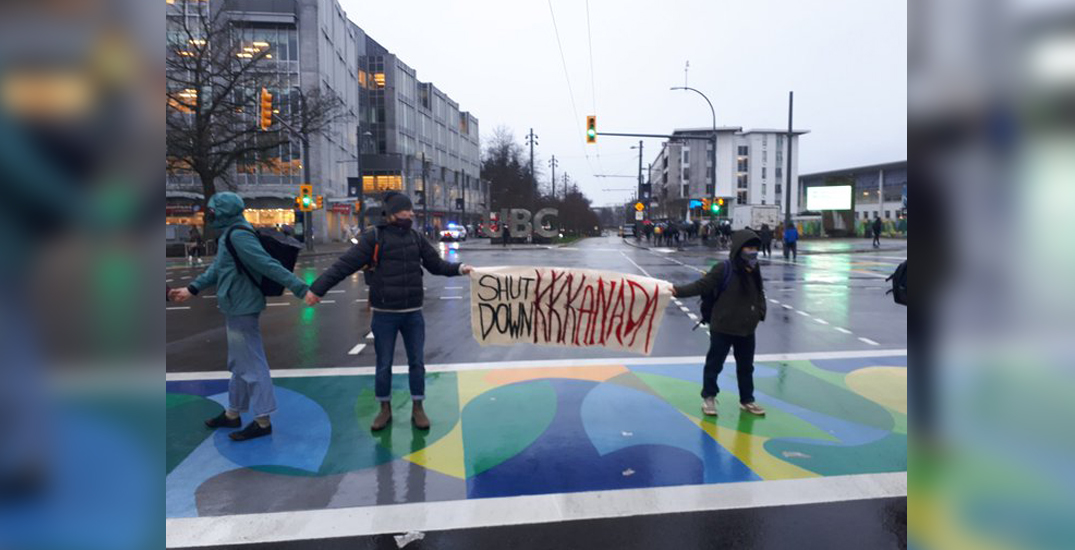 Dozens of Metro Vancouverites voiced their support for Wet’suwet’en hereditary chiefs fighting a northern BC gas pipeline again on Thursday.

“[Eby] had the power to get the police to back down but failed to do so,” tweeted Chief Smogelgem.

David Eby’s Office is occupied. He is the Minister of the Attorney General. He had the power to get the police to back down but failed to do so. A UN representative visited him last month and pleaded with him to do exactly that. pic.twitter.com/Npqrq1mLHm

Demonstrations in solidarity with the Wet’suwet’en hereditary chiefs and their allies resisting a Coastal GasLink natural gas pipeline have continued all week after RCMP arrested several land defenders in northern BC while enforcing an injunction on behalf of the gas company.

And 1 week since folks like you and me started blocking ports, rails and roads across the city, province and country in solidarity.

It’s about time the movement arrived at #UBC. pic.twitter.com/adSuU3ZgRs

In Northern BC, the 670-kilometre Coastal GasLink pipeline under construction is slated to cross Wet’suwet’en territory to bring liquified natural gas to port in Kitimat, BC.

All 20 elected Indigenous band councils along the route have signed on, but the hereditary chiefs of several Wet’suwet’en clans don’t want the project crossing their unceded territory.

Elected chiefs and band councils are a system of governance put in place by the Indian Act, whereas Wet’suwet’en people traditionally followed a clan system with hereditary chiefs as leaders.