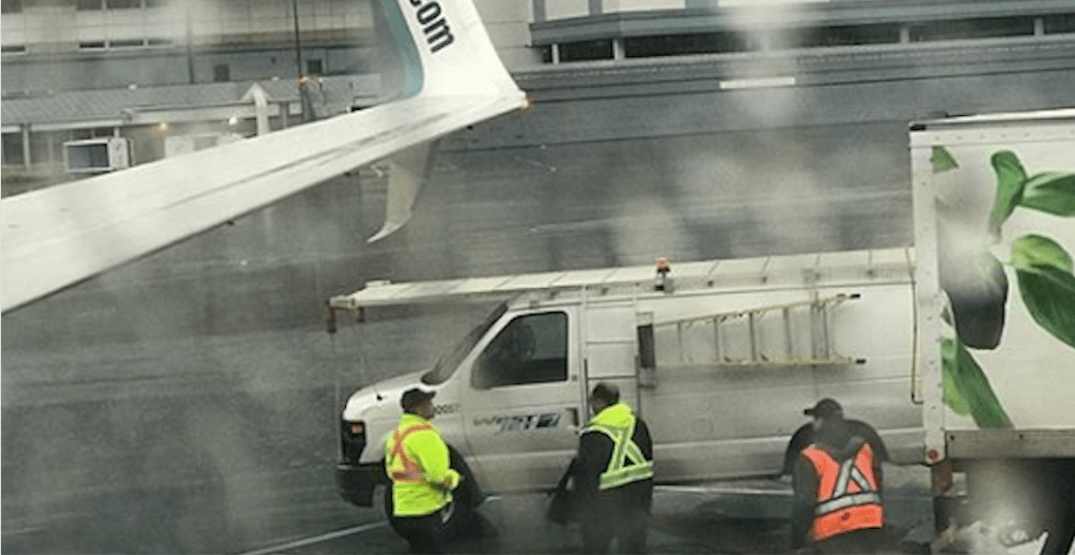 A Westjet plane full of passengers hoping to escape Vancouver’s rainy weather and head for sunnier skies in Palm Springs on Thursday were forced to wait a little longer, after the plane hit a catering vehicle while backing out of its gate.

Passengers on the flight shared their perspectives on the cancelled flight and current situation.

Oh my @WestJet flight got canceled because our pilot wrecked the plane by driving into a truck on the tarmac. On the upside, I’m not in the air on a plane piloted by a pilot so incompetent he totaled a plane by taxiing into a truck.

We just broke our wing backing up; flight cancelled on this full plane. True story. #westjet #flightcancelled #adventuretime Last time a plane broke when I boarded, I met my first husband… #noaccidents

In response, Westjet tweeted that the aircraft was “under the control of our ground crew at the time of the incident.”

We’re sorry to hear of the delay to your travels. The aircraft was under the control of our contracted ground crew at the time of the incident. We hope to get you up and on your way very soon!

A Westjet spokesperson told Daily Hive that “all guests and crew were safely offloaded upon the aircraft’s return to gate and have been re-accommodated onto a new aircraft scheduled to depart shortly.”