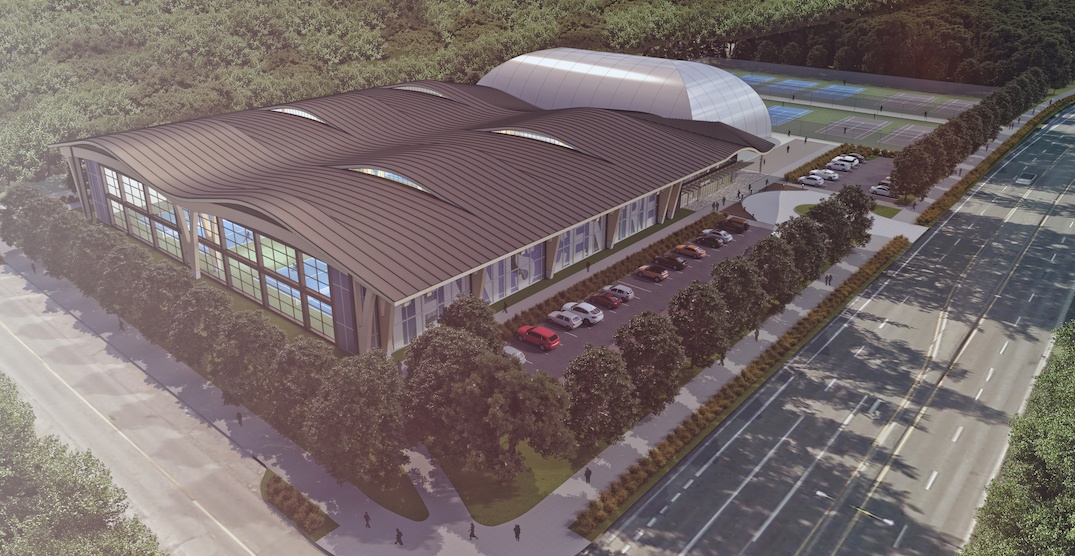 Plans to build a state-of-the-art national tennis training facility in Burnaby, in an effort to foster Canada’s next top professional tennis players, are advancing forward.

Tennis Canada announced today the design parameters of its Western Canada Tennis Centre at Burnaby Lake Sports Complex (BLSC). The expansive facility will include 24 tennis courts — 12 indoor courts and 12 outdoor courts — including a combination of hard and clay courts, as well as kid’s tennis courts. A space on the second level will be built in as a viewing area.

The facilities will also provide capabilities for other racquet sports, such as pickleball and badminton, and supporting services including fitness, physiotherapy, and analytics.

Highly preliminary design concepts for the indoor portion of the complex show a large traditional structure and an air bubble dome.

The new complex is a partnership between Tennis Canada and the City of Burnaby, which owns and operates BLSC. A memorandum of understanding was signed between the two parties last summer, and they are slated to have an operating agreement by the end of the year.

“From the early stages of discussion, Tennis Canada and the City of Burnaby have always had a common vision for the Western Canada Tennis Centre. We are making good progress working together to achieve this vision,” said Michael Downey, president and CEO of Tennis Canada, in a statement.

“We firmly believe that the establishment of this centre will significantly contribute to the growth of our sport from grassroots to high performance, as it will host, among other things, a National Junior Training Program and Canada’s only National Wheelchair program. Given the large number of courts, it will also host many tennis competitions covering local, provincial, national and international levels, bringing significant economic value to Burnaby and the Lower Mainland.”

Construction costs for the new facility are estimated at $30 million, with roughly 30% of the funds raised to date. Tennis Canada hopes to begin construction in 2021 for an opening in 2022.

The new training hub has the support of some of Canada’s top professional tennis players, including former No. 5 player in the world, Eugenie Bouchard.

“Grassroots tennis continues to grow in the summer, but the need for more covered courts is evident if we want our sport to be available year-round,” said Bouchard.

“This center will also provide a better chance for young athletes who dream of a career in pro tennis to exceed their own expectations, and in turn, inspire more kids to pick up a racquet and play.”

It is unclear what will happen to the existing Burnaby Tennis Club facility located in the area.