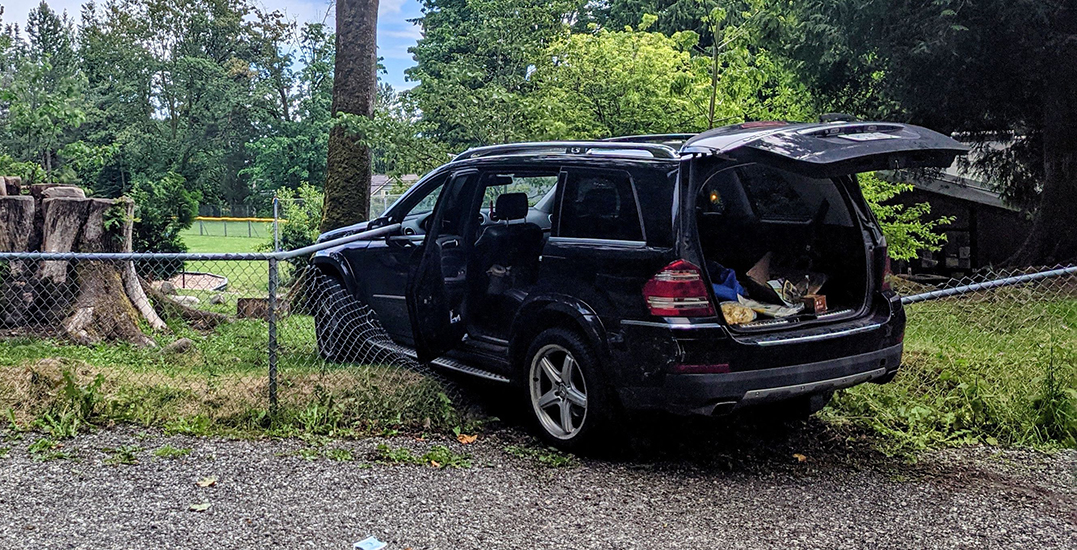 A Mercedes SUV crashed into the fence of an elementary school playground, narrowly missing nearby children (West Vancouver PD).

Police say it’s an “absolute miracle” that nobody was hurt after a driver lost control of their vehicle and crashed through the fence of an elementary school playground.

West Vancouver Police (WVPD) say that they received a call regarding the single-vehicle collision.

When officers arrived on the scene, they identified the driver, the sole occupant of a 2009 Mercedes SUV, as well as multiple witnesses.

“Officers determined that the vehicle had been seen driving toward an open parking spot next to the playground, when it suddenly accelerated, crashing through a chain-link fence, and landing close to a nearby play-structure,” reads a statement from the WVPD.

A Mercedes SUV crashed into the fence of an elementary school playground, narrowly missing nearby children (West Vancouver PD).

Fire & Rescue crews were also required to attend to the crash. The fuel tank of the vehicle was punctured and approximately 50 litres of fuel was spilled on the playground.

Police add that there were many children and adults in the area at the time but fortunately, nobody was hurt.

“It’s an absolute miracle that nobody was injured in this incident,” says Cst Kevin Goodmurphy.

“This is a stark reminder to slow down and pay attention while driving near schools.”

The driver issued a violation ticket for driving without due care. Police say that the driver was also given a ticket for speeding in the same school zone, only a few days before.