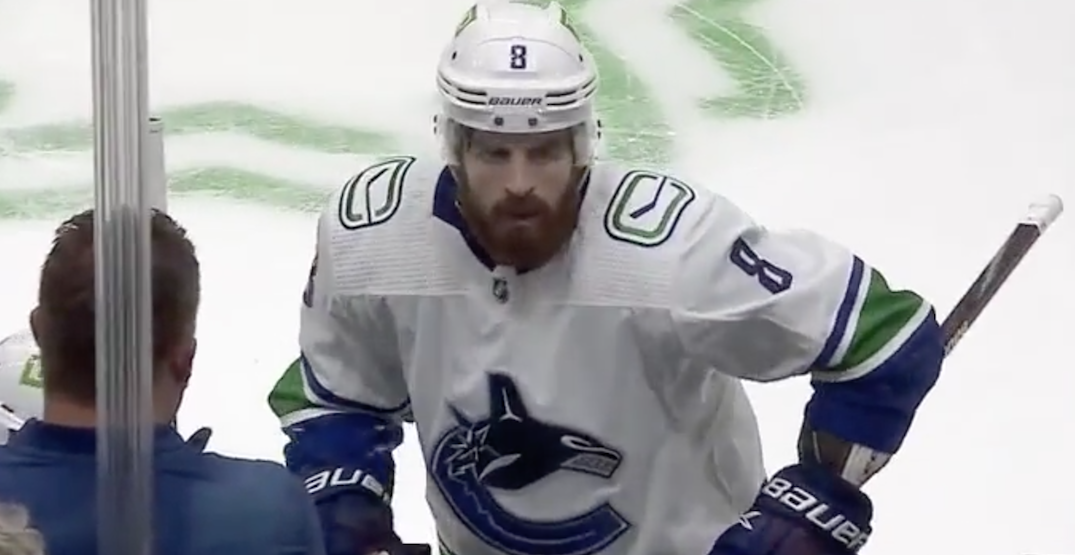 He said it didn’t fire him up, but the timing was perfect.

It was a comeback victory for the Canucks, who trailed 2-1 in the third period. Bo Horvat scored his second of the game with 7:08 remaining in the third, before Garland netted the winner with just 4:02 left.

GARLAND TURNED ON THE JETS FOR THIS ONE 🚀 pic.twitter.com/VXUafrWtpb

After his goal, the television broadcast caught Garland staring down a fan behind the Canucks bench. Turns out, he had a good reason for doing it.

The fan had flipped him off just moments earlier.

“He was giving me the finger and yelling at me two minutes earlier just cause I was taping my stick,” Garland said after the game. “I was facing him taping my stick. I just happened to score the next shift. [But] no, that didn’t fire me up at all.”

Apparently there was a Seattle fan heckling Conor Garland earlier in the game, so after Garland scored the GWG he came back to the bench and stared down the fan 😅 pic.twitter.com/HvcShRK9DF

Connor Garland staring down the Kraken fan who mouthed him off right before he scored the game winner is exactly what you’d expect from the angry little elf pic.twitter.com/nNmqxDYprV

Garland admitted that he felt guilty for his part on one of the goals against earlier in the game, but stressed that he’s just a competitive guy — no matter what.

“I just want to win hockey games,” said Garland. “Whatever I play — chess, checkers — whatever it is, I like to win. I get to play in the National Hockey League and that’s something I don’t take lightly. To be able to win hockey games in this league is a lot of fun. I try to go out and compete every night like that.”

They booed Bettman. This really is a hockey town. pic.twitter.com/7bWCIvipVJ

Seattle hockey fans appeared to love their first taste of NHL hockey, as they were loud and engaged in the game all night long.

They booed Gary Bettman, following tradition, and booed the Canucks when they hit the ice too. When Quinn Hughes was sent to the penalty box in the second period, multiple people could be seen talking to him and banging on the glass behind the Canucks defenceman.

Despite the near 100% support for the Kraken (there were a few Canucks jerseys in the crowd), Canucks players said they enjoyed the atmosphere in Seattle.

“It was rocking,” Bo Horvat said. “It was definitely louder than most.”

After a season playing in empty arenas, Horvat admitted that these games are extra special.

“There’s nothing better, honestly. Last year playing in front of nobody, I’m not gonna lie, it sucked. To come back and play [in] a full building again, with the atmosphere like that, it’s why you play hockey. It’s why you play in the NHL.”

History has been made. First-ever win at Climate Pledge Arena belongs to the Vancouver Canucks. pic.twitter.com/HUkyiD9DZl

After going 3-2-1 on the road to start the season, on Tuesday the Canucks will finally get the chance to play in front of a full building at home. It’ll be the first time that’s happened since March 10, 2020.