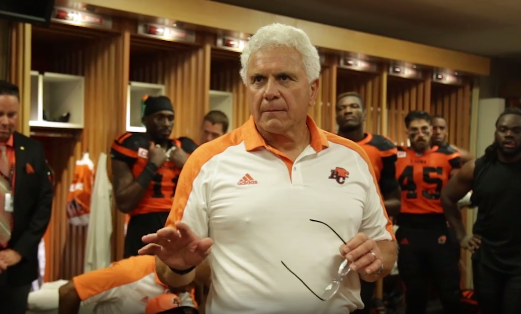 When the BC Lions defeated the Calgary Stampeders last Saturday to kick-off their 2016 season there were several things they accomplished along the way. An opening night win against a big West Division rival was just what the doctor ordered for a team trying to find an identity and the respect from a wait and see fanbase.

The game wasn’t a masterpiece, which is to be expected in football where you only get a month of training camp and two exhibition games to find your cohesion as a team. But after a mistake filled first half the Lions made some half time adjustments and fought hard in the second.

That fight they showed was something that has been missing the last couple of years, both under Mike Benevides and Jeff Tedford. And while it’s much too early to declare the return of Wally Buono a success, you had to love the way the Lions didn’t fold.

Buono’s philosophy to football is simple. Do your job and beat the man across from you and you’ll win football games. If you’re unable to do that, he’ll find someone that is.

One of the great features the Lions have added to their social media the last few years are the locker room videos that take the fan behind closed doors after a win. It gives me goosebumps every time, and if you’ve never seen one, you can catch the latest edition here:

📽 It was a thrilling start to 2016! Lions TV goes inside the locker room for Game Ball presentations! 🏈 👊https://t.co/U2FctB5xFm

Buono’s words to the team aren’t complicated, the emotion of the players is real, and you really see it when Chris Rainey speaks to his teammates after being awarded a game ball for his contributions to the win.

Which brings us to another important to a football team; chemistry. You can have the most talent in the league in your locker room, but if that talent isn’t playing for each other and playing together, you’re not going to win a damn thing.

Much of this Lions core is the same group that was here last season, a year in which the Lions had the youngest team in the CFL. The Lions sprinkled in some key free agent signings this off-season, got a gem in the draft in Charles Vaillancourt and that core is now another year older and wiser. Mix in the respect that Buono commands and you can see why there is promise moving forward.

It’s only one game of course, and the Lions will face a stiff test when they visit the Ticats in Hamilton on a short week. It will be a sold-out crowd at Tim Horton’s Field for the Tabbies, who were dominant in dismantling the Argos last week at BMO Field.

That’s why winning last week was crucial for the Lions. Not only was it against a division opponent, it taught them the value of sticking together and persevering through adversity, something that they can draw from in a hostile environment in Hamilton.

There are certainly things that will need to be cleaned up on Friday. Ticats special teams coach Jeff Reinebold is one of the best in the business and will no doubt be studying the film on the three blocked punts the Lions allowed against the Stamps.

The offence will need to be firing earlier than the second half and with more efficiency, but the Lions proved they are willing to stick together and make the necessary adjustments needed to win football games.

Brian Wawryshyn provides BC Lions content for The Daily Hive and also runs the fan blog BCLionsDen.ca home of the BC Lions Den Pawdcast. Follow him on Twitter @BCLionsDen.