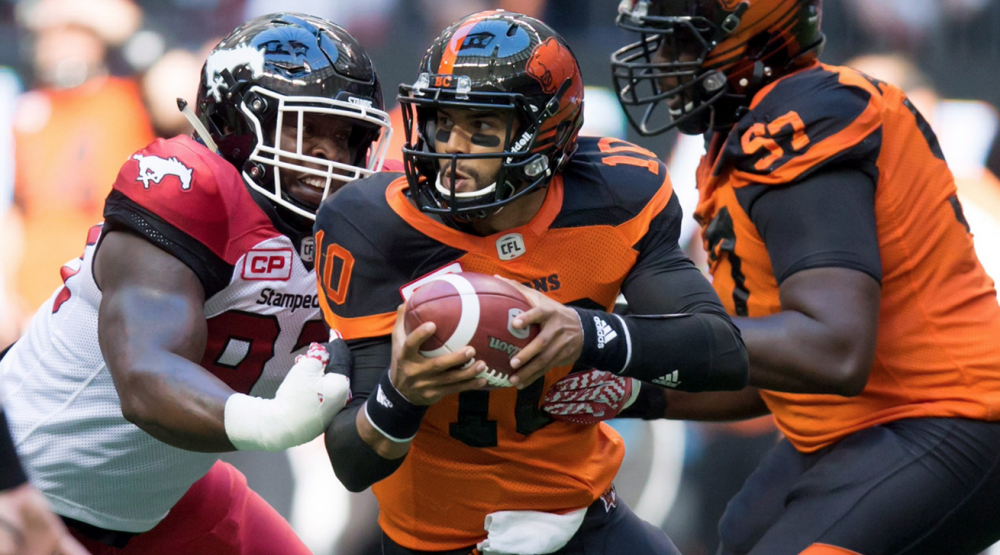 In front of a crowd of 21,386 at BC Place on Saturday night, the BC Lions overcame a 17-6 deficit in the 4th quarter, and shocked both the Calgary Stampeders and seemingly the Lions own fan base as well.

The first half was quite a mess all over the field for BC, but they put it together in the second, prevailing by a score of 20-18. With that said, lets take a deep dive into the three things that stood out the most in last night’s contest.

1. Best of both worlds from the special teams

It was both ugly and riveting to witness in person.

Richie Leone had three punts blocked in the first half, and missed his first field goal attempt of the season from 35 yards out.

On the Calgary side of the ball, the CFL record-holder for most consecutive made field goals, Rene Paredes, also experienced some difficulties kicking the ball. Paredes missed two attempts from distance, including one late in the 4th quarter that would’ve tied the game at 20.

The nicest play of the game came from Lions punt returner Chris Rainey, who continues to marvel and win over fans in Vancouver. Down 17-13 early in the 4th quarter, Rainey had a 72-yard punt return that he took to the house, ultimately ending up the game winning score.

We were in need of a big play… and then the rain man delivered!@CRainey3 on his heroics against Calgary. 🦁 👊https://t.co/5w8kPsqd7U

Our highly-esteemed sports editor Rob Williams was also in attendance tonight, and pointed out this very unnatural, but effective, block by Canadian special teamer Eric Fraser (#7).

Way to use your back, Eric.

Despite the mostly great field position that Bo-Levi Mitchell and company were gifted with throughout the 60 minutes of play, the Leos D showed up. Defensive back TJ Lee strip-sacked Mitchell, leading to a Mic’hael Brooks fumble recovery. Brooks also sacked Stamps backup QB Drew Tate to force a turnover on downs on the Lions two-yard line later in the half. Linebacker Adam Bighill led the defence with 9 tackles as well as a key sack in the 4th quarter that led to one of the Paredes misses.

The biggest story of all, however, was the fact that Calgary had the ball on the 1-yard line of BC three consecutive times, and the Lions didn’t let them into the end zone once. Dave Dickenson gave credit to Mark Washington’s group after the game, telling reporters that BC did some stuff he hasn’t seen.

Caught off guard, Jerome Messam felt the brunt of the new-look Leos defence, rushing for only 16 yards on seven carries.

We see them boys 2 more times…..#giveaway

@JMessam thank you for being so generous you really shouldn't have

@rolly_lumbala46 guess he should have scored from the one.

3. Lack of running game efficiency until…

…Jeremiah Johnson took over with under three and half minutes to go in the 4th quarter. Johnson had five rushes afterwards for a grand total of 33 yards. Until then, Johnson had only accounted for a mere 11 yards on four carries.

Most of the night, Jonathan Jennings was spreading the ball around, and finished the evening completing 24 of 42 passes for 248 yards, along with 41 rushing yards of his own. Jennings looked rusty early on, heaving balls down the field numerous times that could’ve easily been picked off by Stampeders DBs. Luckily, Jennings and the Leos offence came into form in the second half. Brian Burnham and Shawn Gore were the leading targets through the air, compiling 155 yards receiving altogether.

With their first win of the season, head coach Wally Buono added to his all-time mark with the 255th victory of his career, and set a new CFL record by starting a 23rd season in the CFL as a head coach.

The Lions will travel next week to Hamilton to play the Ticats on Friday. This time around, BC expects to spoil Hamilton’s home opener of their own. With a big ‘W” in Week 1, the players’ confidence should be high with a performance that fundamentally wasn’t close to their true potential.