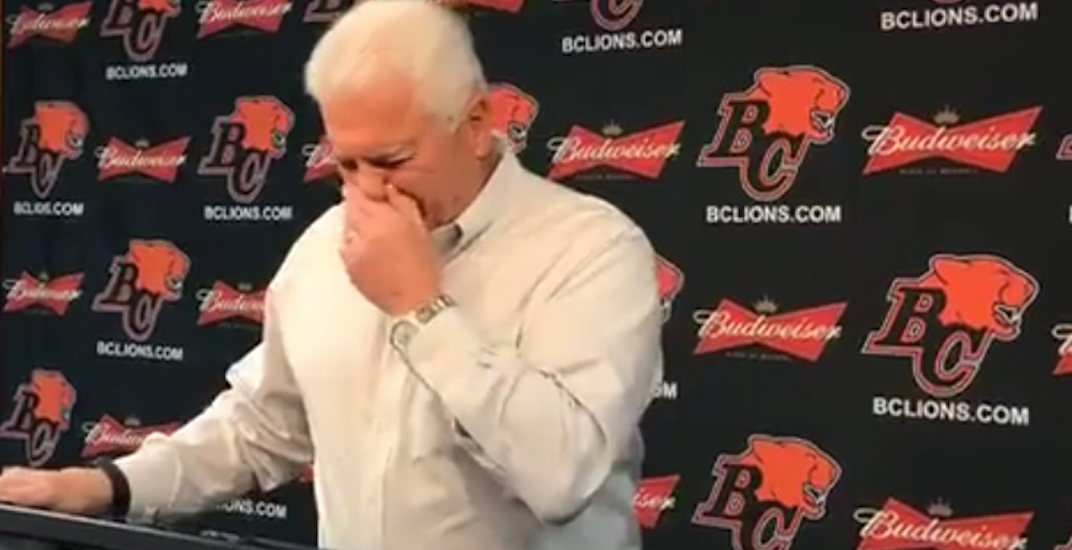 Wally Buono said goodbye to the CFL on Tuesday, as the Canadian football legend conducted his final press conference as head coach of the BC Lions.

Just two days after the Lions’ season came to a crashing halt in a 48-8 playoff loss in Hamilton, in many ways it was difficult for Buono to reflect on his Hall of Fame career.

He’s still stewing about the loss.

“I’ve always said nothing good comes out of losing. That’s what I thought about it,” Buono told reporters from the team’s practice facility in Surrey.

“I don’t know how men can coach for 30 or 40 years and not win all the time. It’s just too difficult. I just think losing’s too hard.”

Good thing Buono has been doing a lot more winning than losing over his 25-year CFL head coaching career.

His final game was less than ideal, clearly, but it should not overshadow what the 68-year-old has accomplished.

After 10 years as a linebacker with the Montreal Alouettes, Buono took over as head coach of the Calgary Stampeders in 1990. With Buono at the helm, the Stampeders became a powerhouse, winning three Grey Cups until he was let go in 2002.

The Lions scooped him up and the team immediately became a powerhouse of their own – winning two Grey Cups – for most of the next nine seasons with Buono as GM and head coach.

Buono retired from coaching but stayed on as general manager following BC’s Grey Cup championship in 2011. With the Lions struggling mightily in all areas, Buono returned to coach in 2016 and provided an instant impact, as his team finished the season with an impressive 12-6 record.

“Football is a tremendous life experience,” Buono said. “The challenges, the experiences, the adrenaline – I don’t believe you can get that anywhere else other than in sports.”

Buono is not one to be short on words, but he was on Tuesday when asked about his legacy. The usually matter-of-fact career football man got emotional, and understandably so.

“I’ve been blessed,” Buono said, fighting back tears. “God’s been good to me.”

With Buono gone, it’ll be up to GM Ed Hervey to lead the Lions back to prominence.

“I really believe Ed is the right man,” said Buono. “He has a tremendous commitment to winning. He works tirelessly.”

There are a lot of questions for the Lions heading into this offseason. They need a new head coach and a new starting quarterback.

Hervey could make a big splash this winter by signing Mark Trestman, who was recently let go as head coach of the Toronto Argonauts, and QB Mike Reilly, who is a pending free agent.

“It’s time for somebody else to lead this organization,” Buono says. “It’s time, I think, for another voice to be heard.”

For the first time in more than 15 years, that won’t include Wally.