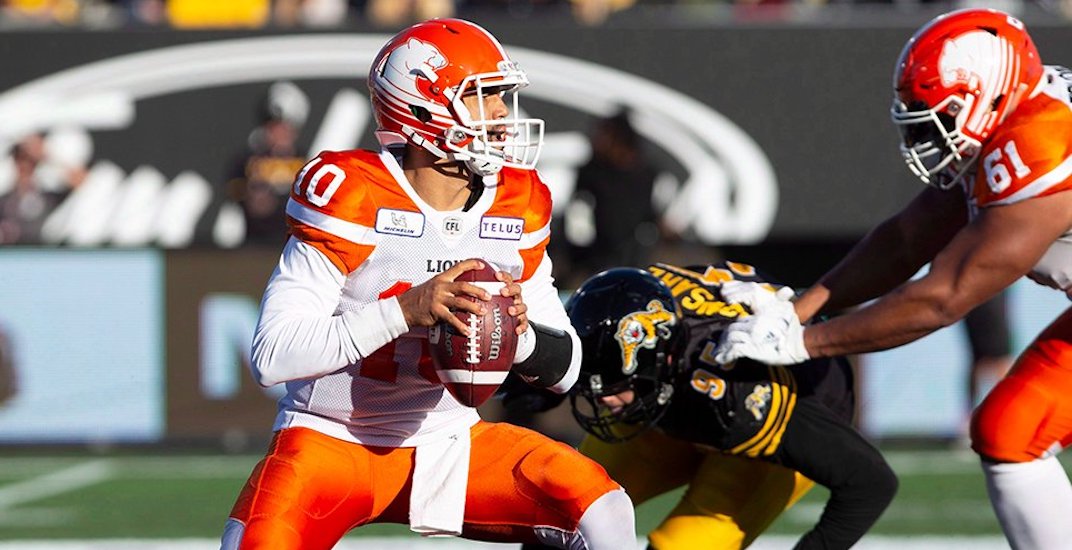 It would have been comical if it wasn’t so sad.

The BC Lions put in a pathetic performance Sunday on the opening day of the CFL playoffs, losing to the Hamilton Tiger-Cats 48-8 to end their season.

Many people hoped the Lions could go on a dream run for Wally Buono. Instead, the most successful coach in CFL history will retire after a nightmare performance by his team.

Not the way we wanted it to end.

Thanks for the support all season long Lions fans. We appreciate you.

And thank you Wally. 🙏🏾 pic.twitter.com/A2mZ5wC7Fb

The game was over early, and it was never close.

Big changes should be on the way this winter, and they’ve got options. With Buono retiring, they’ll need a new head coach. Mark Trestman, who has coached in the NFL and had big success in the CFL, was recently fired by the Toronto Argonauts.

Star quarterback Mike Reilly should be available, and would be a game-changer for BC. A former Lion, he’s familiar with Vancouver. He also knows GM Ed Hervey well given they spent time together with the Edmonton Eskimos. He’s also best friends with Travis Lulay, who is clearly a backup quarterback at this point in his career.

The Lions need to do something, because on Sunday the Lions made an 8-10 football team look like an unstoppable powerhouse.

BC gave up a big play to Ticats receiver Bralon Addison on the opening drive of the game. Hamilton caught a break later in the drive, recovering their own fumble in the end zone for the opening score.

Kevin Palmer picks up a fumble for the @Ticats first touchdown of the game! This play was confirmed after review.#GCPlayoffs #CFLGameDay pic.twitter.com/xlp1PWNOhQ

That was good fortune, but the rest of the game had nothing to do with luck.

Lulay let the ball slip out of his hands on BC’s opening possession, and before they knew it, it was 14-0.

The @Ticats quickly get the ball back as Adrian Tracy jumps on a fumble!!#GCPlayoffs #CFLGameDay pic.twitter.com/Xqk4LYG7eG

The Ticats were up 28-0 at halftime, yet Buono inexplicably chose to stick with Lulay at quarterback.

Lulay completed eight of 17 passes for just 103 yards, with zero touchdowns and one interception, before Jonathon Jennings replaced him. Jennings fared better, but it far too little, and far too late.

Despite Solomon Elimimian’s return to the lineup, the Ticats picked BC’s defence apart all game.

Even kicker Ty Long had a day to forget. The Lions’ Most Outstanding Player this season, he missed his only field goal attempt, from 41 yards, and had to exit the game with an injury.

Needless to say, it was a difficult game for Lions fans to watch:

Man, the #BCLions are dying on their feet. Just awful to watch.

Absolutely gutted right now, the worst part is I have to keep watching this dumpster fire…#BCLions

Kinda sad that this is the way the #BCLions will send Wally Buono off. He deserves better then this trash performance

So far, this has been an unmitigated disaster for the #bclions

Complete no-show by the #BCLions

BC Lions observing the day with a full quarter of silence.

Can the #Lions just concede at this point! It's like watching a car accident in slow motion. #Painful

Its mind boggling how the #BCLions have gotten progressively worse since their winning streak. You'd think they would be chomping at the bit to give Wally a memorable send off, but they've been bloody awful.

Look, Lions, I realize that the Tiger-Cats are also a team with a feline name, but maybe don't keep throwing to their players? #CFL

Hey @TSN, can you please play Yakity Sax quietly in the background of the Lions Ticats game?

Would have been nice if the #bclions showed up. Very disappointing!!

lots of changes coming for 2019