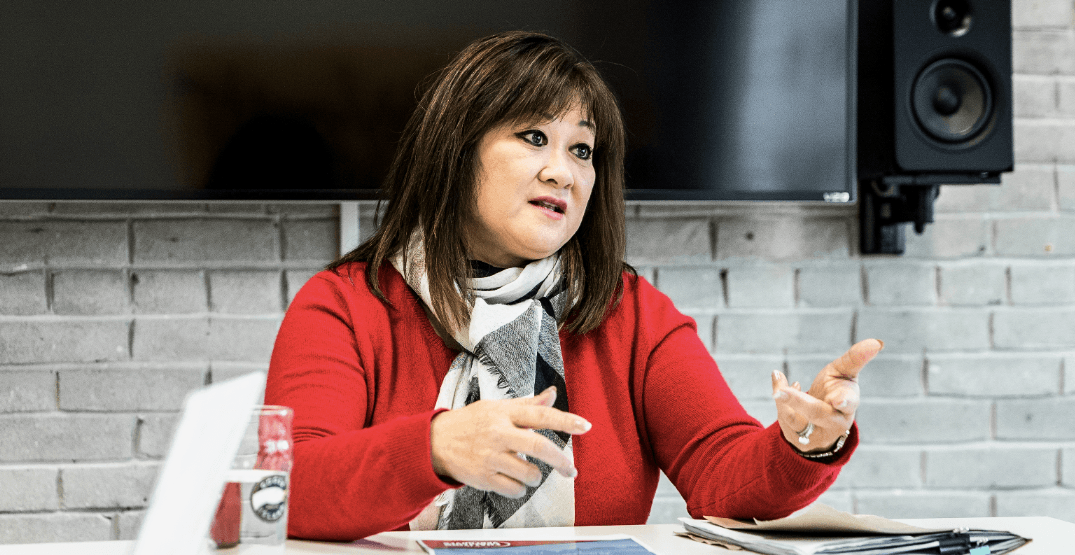 “People are looking for leadership that’s going to restore pride in our city,” she said.

Young is a former Conservative MP for Vancouver South and is running for the mayor’s chair with the newly-formed Coalition Vancouver – a party which bills itself as “100% for the people.”

In a sit-down interview with Daily Hive this week, Young touched on a number of issues and topics facing the city and offered up her party’s plans on how they would handle them if elected.

In Young’s mind, the issue of affordability isn’t about the supply of homes in the city, but rather the type of housing that is being built. The city, she said, has an overabundance of luxury condos, and is severely lacking affordable housing units.

“There hasn’t been any planning or leadership in this area,” she said. “We need to ensure that our city is not being hollowed out by young families fleeing to the suburbs.”

Her plan is to “develop purpose-built rentals” around transit hubs, as well as affordable housing units, under a plan dubbed the “Millenial-Plus” program, which would see the creation of owner-occupied condo units in the city centre and around transit hubs as well.

“This will enable young adults earning $40,000 per year to afford ownership in the city,” she explained.

Asked about a specific timeline for making all this happen, Young responded she wasn’t “going to give numbers and dates, because we’re going to do it immediately, and and we’re going to leverage what we can immediately.” 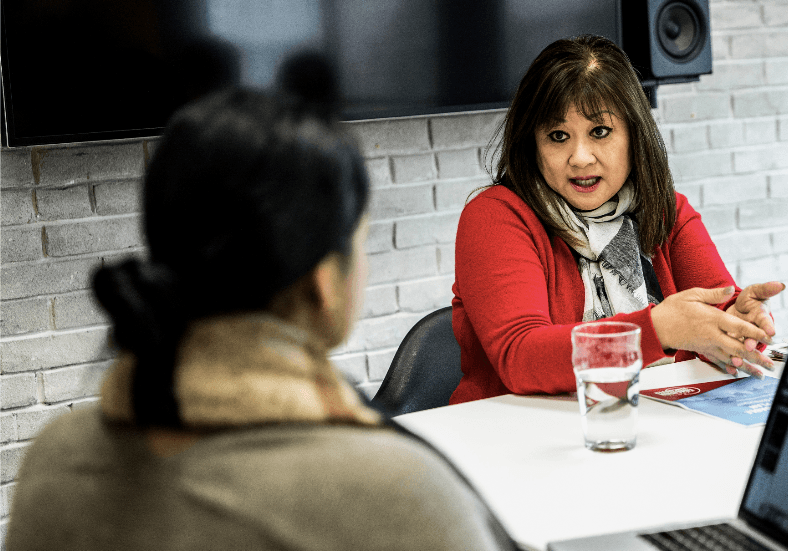 Young said that with her background in sociology, research and social planning, she approaches the issue of affordability “with a great dose of experience, but also with a fairly realistic dose of realism in terms of where the city’s at.”

Asked about how to maintain affordability in a city globally recognized as a desirable place for people to move to and live, Young said it’s a matter of building blocks and “putting out fires.”

Right now, she said, the “fire is affordability for our young people to keep them here; let’s craft together a plan that works to address the affordability issue because that’s step one.”

The next step, she continued, “would be looking at rezoning and working within neighbourhoods, so that the densification is gentle and happens with the collaboration and agreement of the neighbourhood.”

Young believes people love the city because of its neighbourhoods and if elected as part of a majority council, “we will rescind the making room plan and work with our neighbourhoods to develop concrete plans that we can all agree with.”

Young said that when it comes to the ever-present and growing issue of homelessness in the city, she’s “completely committed to providing some leadership” – particularly on the Downtown Eastside.

“People are dying down there because there’s no leadership,” she stressed. “There are some very serious issues that have developed over the last 30 years, and you would think that when you add up all the different levels of government that throw money at this problem – throwing money at it is not the solution.”

Instead, Young said, “we completely need to change the model for what we’re doing down there. We need to stop normalizing it, walking by and saying ‘it’s okay,’ and start providing free, accessible, treatment anytime.”

If elected Young said she will be “camped out on the steps in Victoria, because that’s what is needed from what I’ve seen; we need leadership.”

On jobs and business

Young said the city is severely lacking when it comes to supporting business ventures in Vancouver.

“There is no support or leadership from the city,” she said. “What’s the point of having plans if it takes years to get through the permitting process, or if taxes are so exorbitant that you can’t attract businesses?”

Compounding the problem even further, she said, is the fact that “there’s no business infrastructure to make these happen or to speed up the process, or any real vision.”

“The city needs to be a place where people go to for service, where they know they will be heard and a place to get their issue resolved,” she added.

On the “No-Fun City” image

Young said that when she was growing up in Vancouver, “it was a fun city.”

But due to what she sees as a current lack of municipal leadership, residents have inherited a “dirtier and grimier” city.

As a result, Young and her party have put forth what they call the Clean City Plan, with the ultimate goal of cleaning up the city on a number of points, thereby making it a more attractive place for people to recreate, play, and spend time in.

In addition, she said, “we need to be attracting more diverse and multicultural clubs and restaurants. We’ve got great restaurants, but there’s so much more we could be doing in this city.”

Young recognized the city has lost some ground when it comes to city festivals and public celebrations – one of the most notable being the cancellation of this year’s Canada Day parade, and said it’s a trend she wants to reverse.

“It’s the city’s job to be creating these kinds of get-togethers to bring people together,” she furthered. “This is what makes us a vibrant city and brings people and neighbours together.”

On Vancouver’s future and ‘brand’

Vancouver is “arguably one of the most diverse cities in the world,” said Young.

Thus far, however, that hasn’t been capitalized on like it could be. And that’s something she wants to see change, so Vancouver can become “a truly international city.”

Young said the city needs to open itself up more to the world more and bring the multicultural aspect of the city into the spotlight.

“That could be clubs, arts, it has to be all of it, and it has to be stitched together in a very seamless way,” she added.

“Why would we as a city want to deliberately hinder and slow people, especially when we are already the most congested city in North America?” she asked. “Urban planning should be around planning for the people and if it’s not working for the people, let’s change the plan.”

As such, some of her ideas include doing a bike lane audit, to –among other things – see if the lanes can be moved to “secondary” streets, instead of main arterial routes. She would also work to halt the demolition of the viaducts, noting that areas around them could still be turned into hubs of activity and community spaces.

The viaducts, she added, “are hugely important because they are one of the main arterials for east-west commuters. I live on the east side, so this matters to me.”

When she kicked off her campaign earlier this year, Young made the issue of bike lanes a key focal point of her campaign.

And while her plan hasn’t changed, Young said it’s not cycling she has an issue with, but rather, she sees the bike lanes as “a symbol of what’s happening in the city and the fact that city hall has dictated their ideology to the people in this city.”

Young said she chose bike lanes as a focal point “because we wanted to highlight the fact that this is a city hall that has not listened to the people and in fact, imposed their will on the people.”

She also confirmed that “no new bike lanes will ever be imposed” on communities without specific consultation and voting from those communities “that are directly affected.”

On her message to voters

Young said that for her and Coalition Vancouver, it’s about ” really listening to the people. Civic-level politics should be about cleaning and budgeting your house.”

At the end of the day, Young said, “I love my city and I want to bring common sense back to it. People need to look at the practicality of the policies we are proposing and why we’re proposing them.”