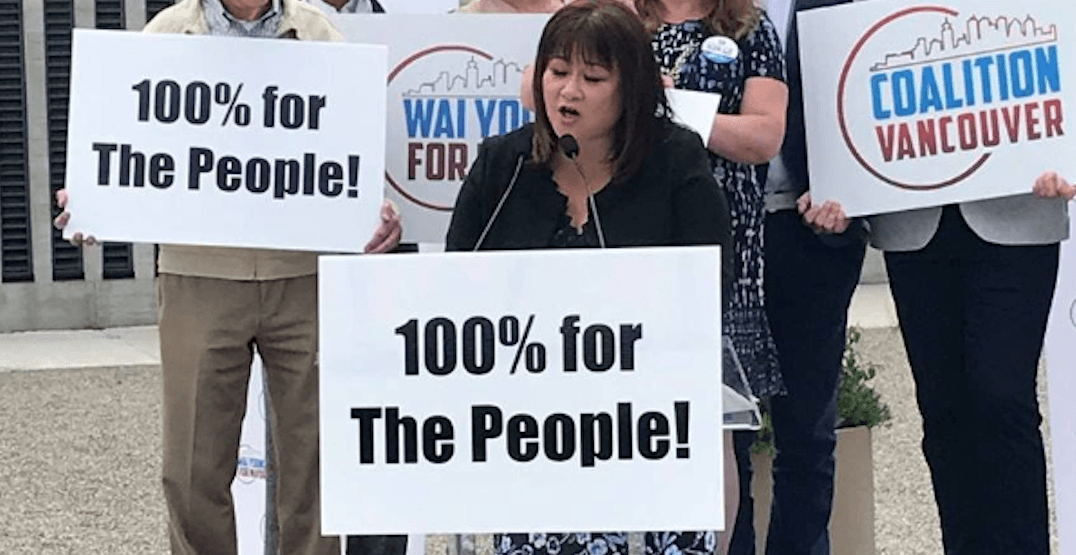 “In all ways and at every level, we are going to take back our city,” Young said during her announcement on Thursday. “We know that city hall is broken. Big business, developers, unions and special interest groups have been running our city, for their benefit, not ours and have ignored crisis after crisis.”

She called City Hall “inept,” with “an agenda elsewhere.”

Saying that there “will no longer be a blind adherence” to that agenda, Young then went after what she called the “radical, agenda-driven war on transportation,” in the city.

This agenda, she said, “artificially chokes our roads, reduces our mobility, productivity and economic growth.”

Young said that with her as mayor and a Coalition Vancouver council, “there will be no more new bike lanes unless we remove a bike lane from somewhere else.”

She called bike lanes “divisive and discriminatory,” adding that “they discriminate against seniors, single moms, and many other groups; they are private roadways.”

She also confirmed that “no new bike lanes will ever be imposed” on communities without specific consultation and voting from those communities “that are directly affected.”

Young said she believes that “respectful consultations are critical on how we run and how we live together.”

She added that she will work to restore confidence and trust “with a huge number of community groups that feel betrayed and railroaded by the existing parties at City Hall.”

A former Conservative MP for Vancouver South, Young noted that she herself has “no ties to big business, to unions, or to special-interest groups.”

City Hall, she futhered, “should be for the people and their needs – not for dictators with done deals.”

Coalition Vancouver “will consult,” she said. “We will seek your ideas, we will respect your input.”

This, Young added, “is what a functioning City Hall should look like: A mayor and a council who will work with you and for you.”