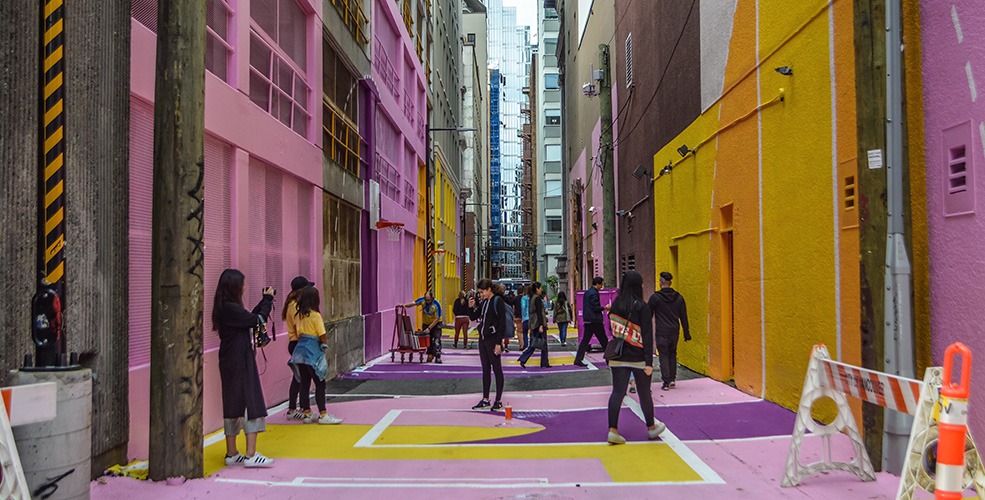 When the dust finally settles on September, there’s no doubt it will be seen as a seminal month for city building in Vancouver.

The Pro Walk / Pro Bike / Pro Place Conference came to town, bringing 1,200 planners, practitioners, and policy makers from around the world to study our renowned livability and mobility.

The related Placemaking Leadership Forum and Future of Places Summit sparked a number of important workshops, laboratories, and discussions around the function of public space in our cities.

The month culminated in a #POPCrawl event, where participants undertook a self-guided tour of new placemaking interventions across the city, including the unveiling of Alley-Oop – the first of three alleyways being activated by the Downtown Vancouver Business Improvement Association, in partnership with the City of Vancouver.

Elsewhere in the news that week, the City of Vancouver also began consultation on the design and programming of the 800-block of Robson Street as it evolves into a permanent pedestrian plaza. They also announced the hiring of new Chief Planner, Gil Kelley, who – earlier this week – presented his ideas on planning to a sold out crowd of almost 700 at the Vancouver Playhouse. 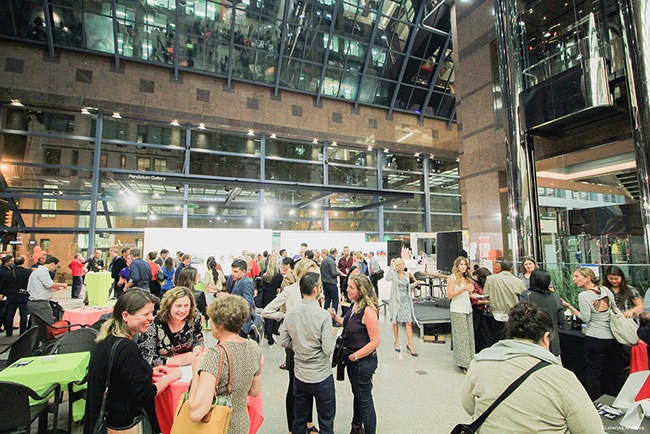 Amidst all of this hoopla was another milestone: the 10-year anniversary of the Vancouver Public Space Network (VPSN), marked by a sizeable gathering in the Pendulum Gallery . “Happy City” author Charles Montgomery, former Chief Planner Brent Toderian, and Councillor Andrea Reimer were all on hand to say a few words, as was VPSN Founder and Director Andrew Pask. And although he won’t take direct credit, there’s no doubt his organization played a pivotal role in helping our young city arrive at these exciting times. 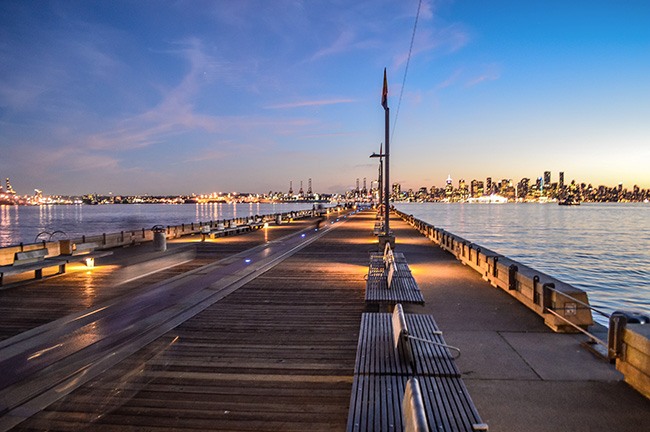 While the VPSN officially formed in 2006, Pask insists its genesis actually started a few years earlier: “I was having conversations with a number of people across the city from different backgrounds, including academics, activists, and people working in local government,” he recalls. “Some were interested in the proliferation of billboards, others were concerned with surveillance cameras on Granville Street, while some shared a desire to do some guerilla gardening.”

“But the key thread that tied all of things together was the concept of public space,” he suggests. So Pask sat down with about a dozen of these individuals, and – from that first meeting – the VPSN was born. “We figured we would get together to do some fun projects and a bit of advocacy work,” says Pask. But after doing one or two of those projects, they started to get some press. “Suddenly, people would ask: ‘How can I help?’” Pask remembers. Over the past decade, their membership base has grown from a dozen kitchen table activists to over 3,000 volunteering their time with a variety of working groups and sub-committees.

So why has public space never been a priority in Vancouver over its short, 130-year history? Some suggest it has something to do with being an “Edge City”, which – due to its spectacular natural setting – tends to locate the public realm at the perimeter, in proximity to the ocean, river, and mountains. “We have some fantastic public spaces in Vancouver,” Pask admits. “The seawall and Stanley Park are defining spaces in this city. But because we have them, it’s possible we’ve gotten too comfortable with regard to other types of spaces and places.”

Shaping the discourse around public space 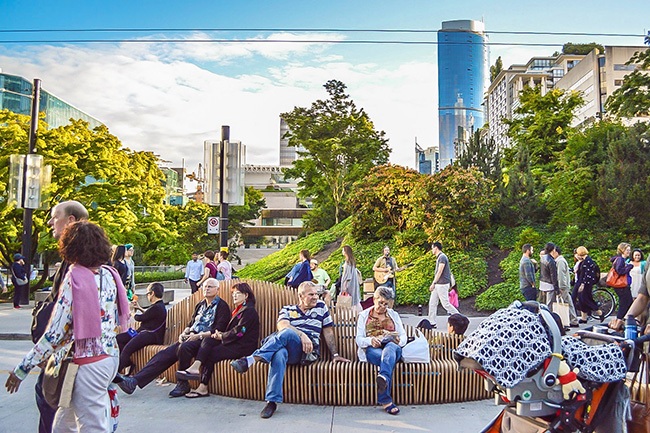 When asked about the VPSN’s biggest accomplishments, Pask is particularly proud of advancing the conversation around a central gathering place in the city: “We have been, and continue to be advocates for Robson Square, all the way back our early days.” In 2009, the organization launched “Where’s The Square”, their own juried competition that sought to locate and design a central public square for Vancouver, attracting over 65 entries from architects and urban designers around the world.

Pask also points to the VPSN’s annual Hallowe’en Skytrain Party, a mobile costumed dance party that has grown into one of their most popular, signature event. “That one night really is about the temporary, ephemeral transformation of public space,” he claims.

Undoubtedly, the VPSN has helped shape the discourse around public space locally, especially with City Staff; working hard to push that lens onto the Greenest City Action Plan,  Transportation 2040, Engaged City Task Force, the Healthy City Strategy, and various Community Plans. “If you want to talk about livability in the city, public space is absolutely critical to that conversation,” Pask states. “It should never be an afterthought. It should be in the foreground.” 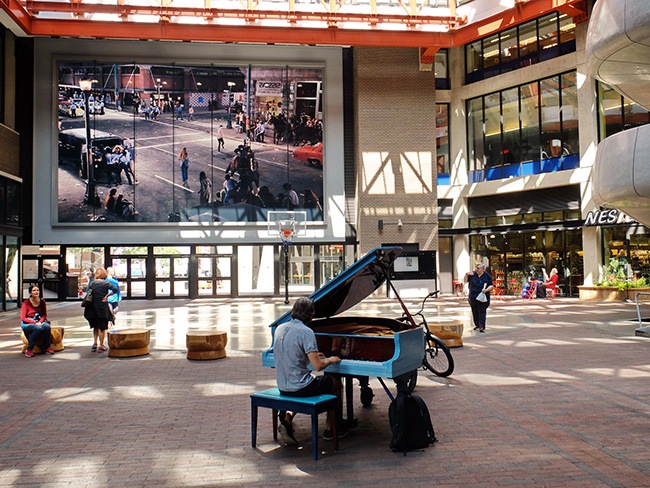 When asked to identify areas of untapped potential, Pask insists the activation of our existing public space capacity must be a priority: “We have dozens of privately-owned, or sometimes public-owned plazas downtown that often suffer from poor design, poor programming, or both. They’re nice places to sit and have lunch. But then what?” he asks rhetorically.

Outside of site-specific opportunities, Pask would also like to see a more systems-based approach to placemaking (as they have in Auckland). “We can point to individual spaces in the city. Some are better designed than others,” he proposes. “But we need to start thinking comprehensively about how it all fits together. The way that those pieces of connective tissue can reinforce goals around culture, economy, and reconciliation. Public space is a network.”

Last but not least, Pask sees our temperate rainforest setting as an opportunity rather than a hindrance. Much like Edmonton recently introduced Winter City Design Guidelines into its zoning bylaws, he implies Vancouver can be equally innovative in response to our own challenging climate. “The City of Vancouver has a few weather protection guidelines,” he says. “But why aren’t we at the forefront of rainy city placemaking?” he asks, pointing to the Woodward’s Atrium as one of a handful of quality covered public spaces in our city. “Why aren’t we doing more?” 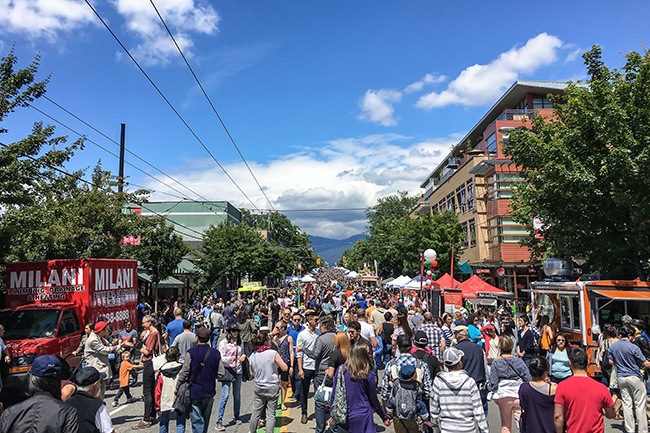 One thing’s for certain, the VPSN have tapped into the palpable demand for vibrant, equitable, and shared spaces; a demand clearly demonstrated in the throngs of people that descend on a street whenever a festival temporarily closes it to motor vehicles. “We were well-positioned 10 years ago to capture that emergent recognition of public space, and the importance of streets and plazas,” Pask concedes.

“When we first started our work, you didn’t find a lot of reference to public space in the city.” For advancing the level of civic discourse, everyone at VPSN deserves a tremendous amount of credit. We’re very excited to see where the next 10 years takes them.