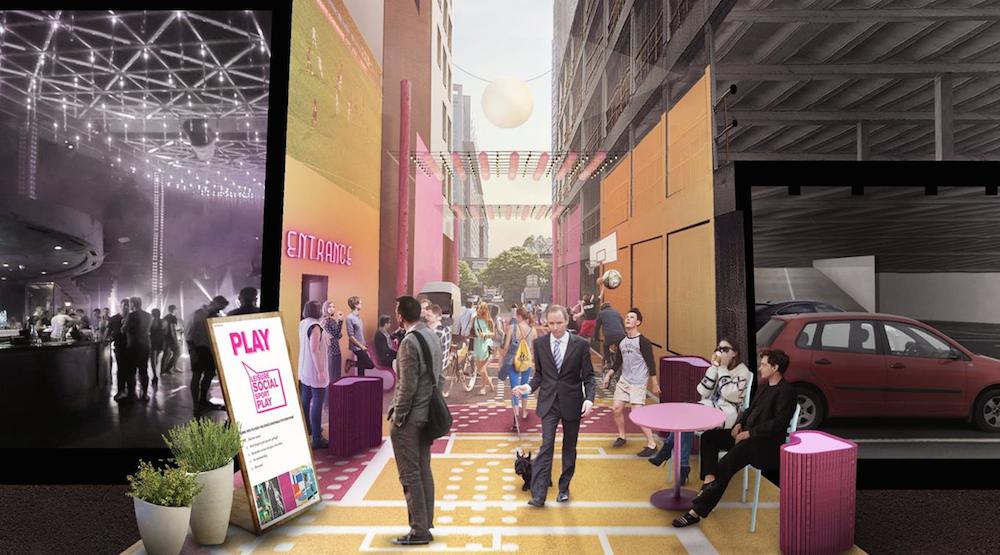 Several Downtown Vancouver laneways are set to be reimagined in a pilot project that will beautify a number of gritty, under-utilized spaces, effectively turning the areas into vibrant pedestrian-friendly zones.

The first laneway to be revitalized is the city block-long laneway south of West Hastings Street between Granville and Seymour streets.

As the first of the Downtown Vancouver Business Improvement Association’s (DVBIA) ‘More Awesome Now’ laneway program, in partnership with the City of Vancouver and local firm HCMA Architecture + Design, this laneway has been painted in bright pink and yellow colours and will soon also boast basketball hoops and furniture. Additionally, decorative lighting and a geolocation orb will be installed over the coming weeks.

While the public is encouraged to use the laneway as an area for play, exercise, and socializing, the laneway will still be a shared space with vehicles as adjacent businesses rely on the lane for garbage pickup and deliveries.

Charles Gauthier, the President and CEO of the DVBIA, told Daily Hive that property owners and businesses “had no hesitation with getting on board,” even though they would be responsible for the maintenance and monitoring of the new laneway space.

“We sought out their participation and commitment and their approval because we’re painting on the walls of their buildings facing the alleyway,” he said. “So we’ve had great cooperation from them.”

A future phase for this particular beautified laneway project will involve the direct participation of at least three businesses. Gauthier says Trees Organic Coffee Shop on the western end of the laneway on Granville Street is keen on the idea of extending its patio into the alley, while discussions on possible activations are ongoing with Starbucks on the eastern end on Seymour Street.

Additionally, the Odyssey Nightclub – located mid-block – has a secondary entrance in the laneway and is also interested in having more activations related to the back entrance.

“We hope that eventually there will be some organic programming and events happening that doesn’t require the DVIBA to be involved at all,” said Gauthier.

The West Hastings project is just one of three laneways that could be converted as part of a pilot project to demonstrate its feasibility in the city. The other two sites are located at the laneway south of Alberni Street between Burrard and Thurlow streets and the laneway between Granville and Seymour streets from Robson and Smithe streets, behind the Orpheum Theatre. 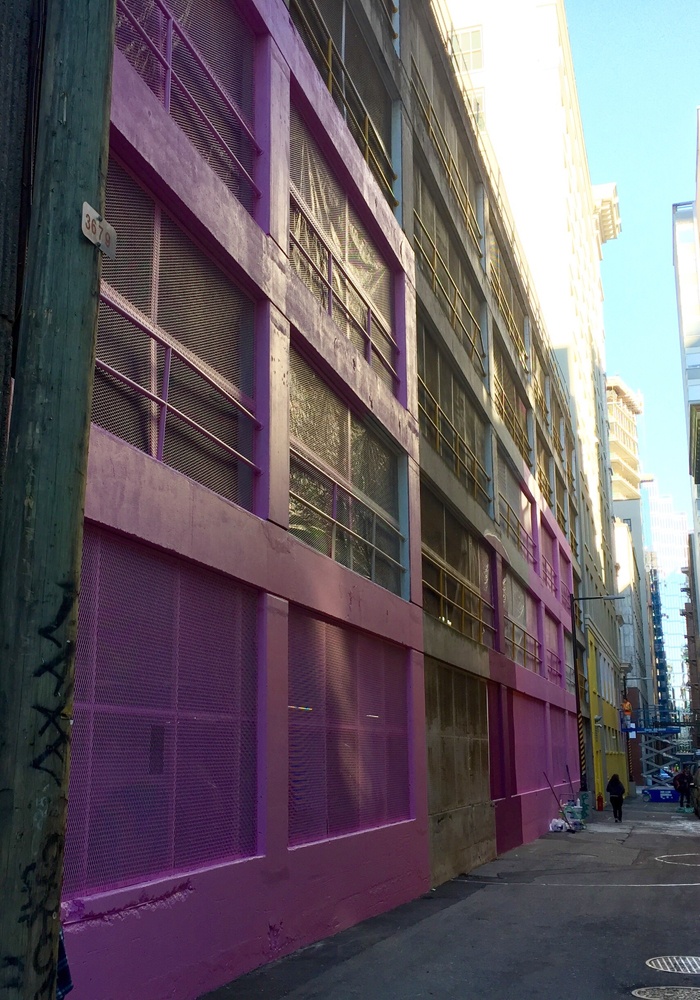 The first of many

These could be the first of many laneways to come, eventually becoming a network of laneways not just in the downtown peninsula but across the city. The designers drew inspiration from Japan, Seattle, Chicago, and Melbourne, Australia, where a laneway culture thrives with daily crowds pouring into over 2.5 kms of laneways fronted by shops, cafes, restaurants, and public art.

Over 200 city blocks of downtown Vancouver’s street grid are bisected by a laneway, and if they were all to be revitalized the city centre’s public pedestrian area could potentially increase by up to 30%.

“We’re required by the City to do metrics before and after, so we’ve got some great before numbers,” said Gauthier. “Once we’ve got the first laneway done, we’ll be monitoring it. The plan is to replicate this pilot project anywhere in the City, not just downtown.”

“It’s going to require ongoing partnerships with building owners and the City and that’s something we hope we can capitalize from.”

All three laneways will cost a total of $200,000, with $100,000 coming from the DVBIA and its members and the remaining from the municipal government.

Another laneway at TELUS Garden, designed and funded by TELUS, running behind Richards Street from West Georgia to Robson streets is expected to be complete before the end of the year. Bollards installed at the entrances into the streets will turn the area into a pedestrian-only zone. 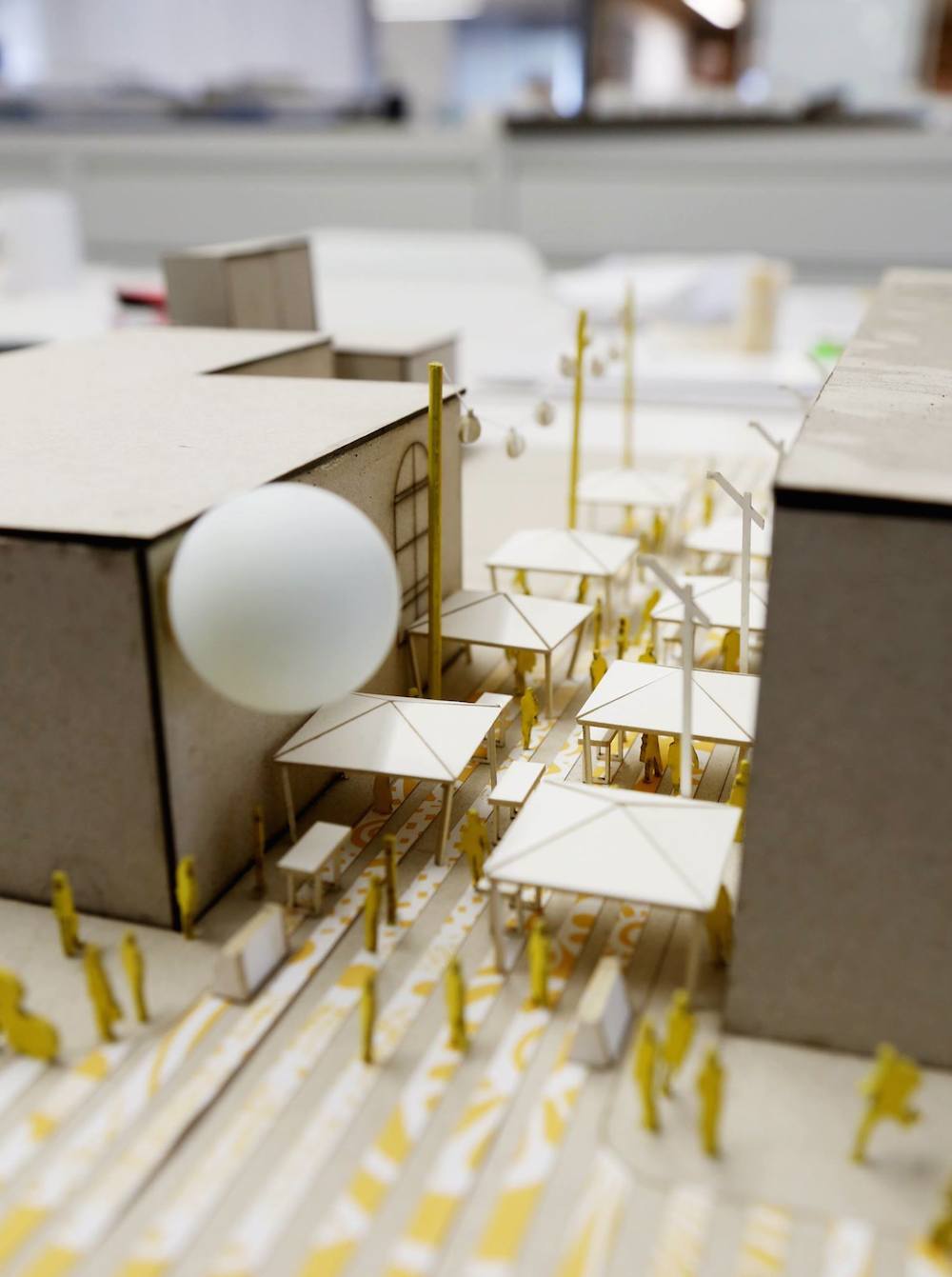 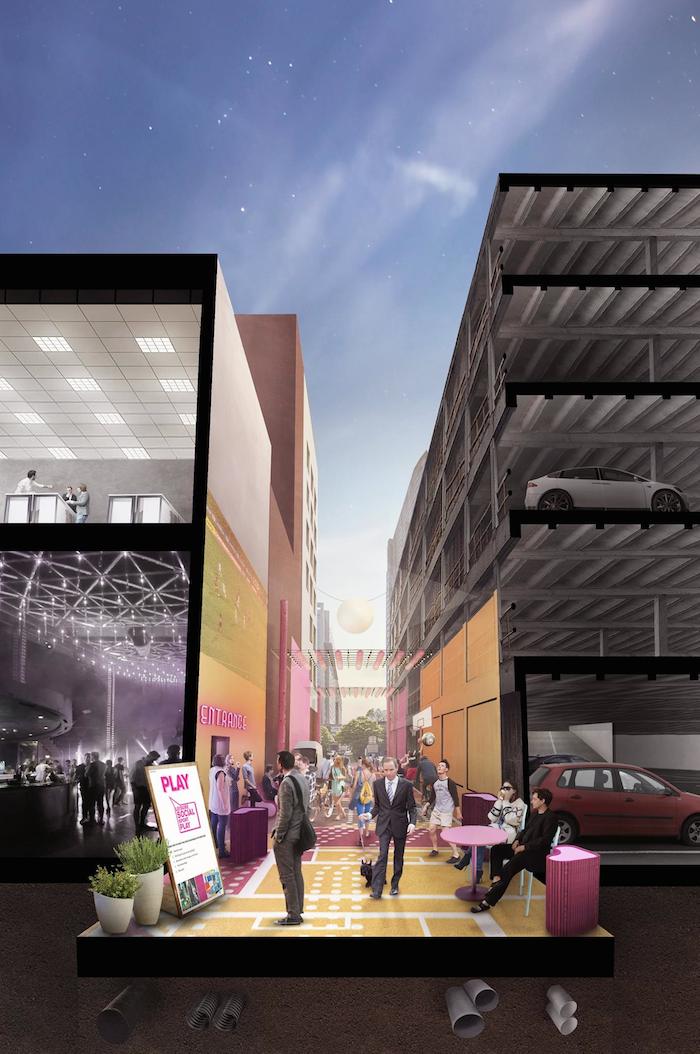