After a tent fire, an assault, and a weapons seizure all since Tuesday morning, police in Vancouver are “re-issuing concerns” about public safety in Oppenheimer Park.

“Our officers are continuing to deal with multiple seizures of weapons in the park, which raises safety concerns for members of the community, as well as our officers,” said VPD Sgt. Aaron Roed. “We continue to issue warnings about crime stemming from the park, which is showing no signs of slowing down.”

Roed said that early on Tuesday morning, officers were called to the park after a 32-year-old Vancouver man was assaulted inside a tent. Police said he was struck in the face with the handle of an axe and sustained minor injuries.

While investigating the incident, officers located the axe, along with two additional axes, six knives, and one bolt cutter, all inside of the tent. 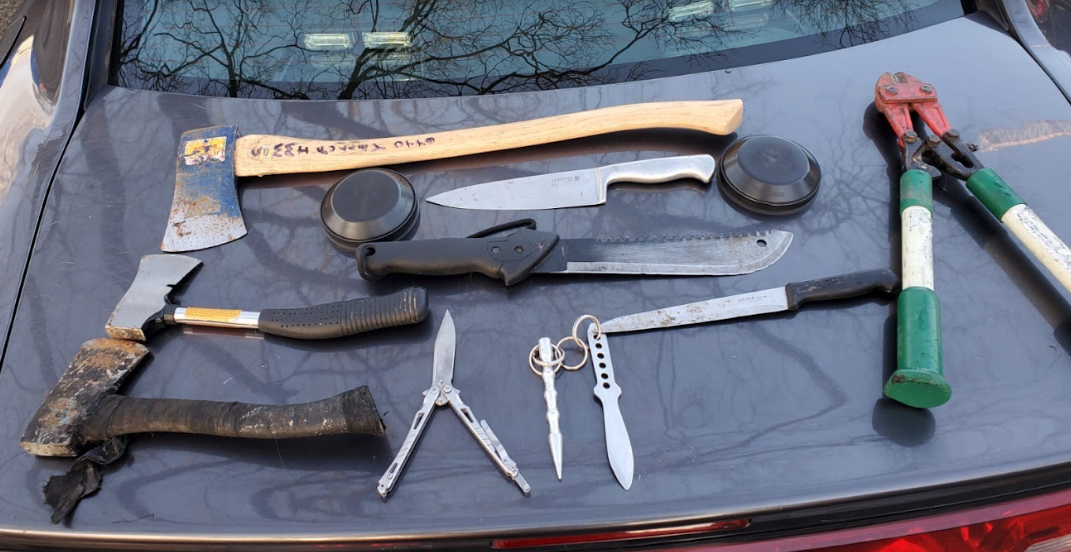 This seizure comes only a week after VPD released information about another substantial seizure of weapons that took place on February 27. No arrests have yet been made, and police said they are continuing to investigate the incident.

Then shortly before 3:30 am today, VPD officers discovered a tent on fire in the park and notified Vancouver fire rescue, who responded to the scene and extinguished the blaze while police cleared the immediate area.

The tent, of which “no one claimed ownership,” was severely damaged by the blaze, as the fire caused explosions from propane and aerosol containers.

“This fire could have gotten out of hand very quickly,” said Roed. “It was fortunate that no one was injured.”

In light of these and other recent incidents, Roed said police will “continue to maintain a highly visible presence in and around Oppenheimer Park, working with the City of Vancouver, Vancouver Fire and Rescue, and the Vancouver Park Board, on safety issues related to the park.”