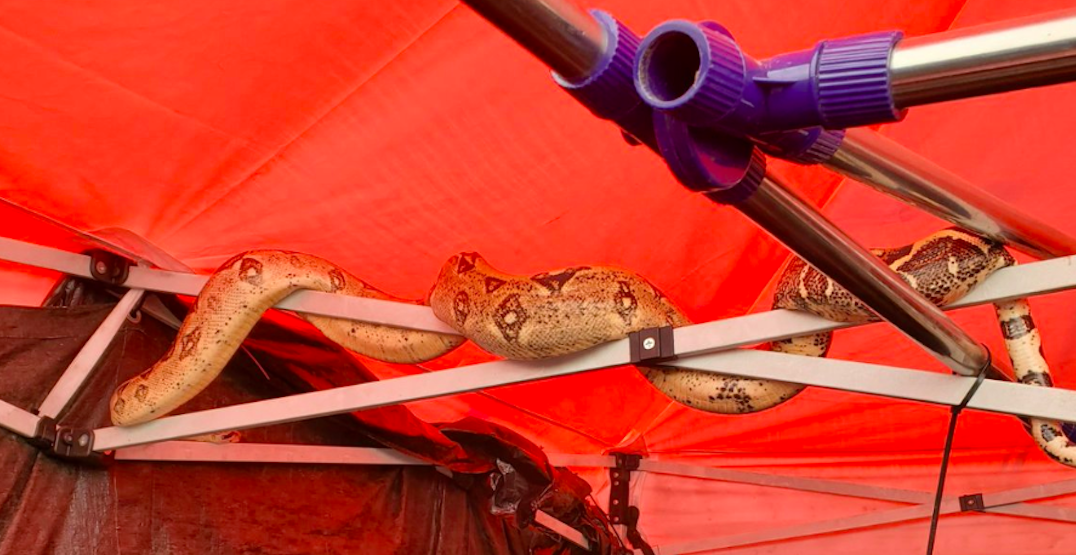 What started as a 911 call about a man with a machete in Oppenheimer Park, ended up yielding much more for the Vancouver police officers who responded.

In a tweet, VPD Chief Adam Palmer said that officers were called to the Downtown Eastside Park on Friday afternoon for reports of a man with a machete who was involved in a fight.

According to VPD Const Tania Visintin, officer arrived in the park around 12:30 p.m, but the suspects in the fight “had dispersed.”

Officers were then directed to a tent by witnesses, where they initially found the snake and some weapons in plain-view, she said.

“Every call in policing is different, and this is a call responding officers will never forget,” said Visintin. “It was shocking for officers to find the snake, but the number of weapons they discovered is also very concerning.”

In total, police found and seized:

Visintin said one suspect is in custody in relation to the original call about the fight, and the investigation is ongoing.

Animal Services from the City of Vancouver responded to seize the snake.

The incident comes on the same day that the BC government said outreach workers have offered all homeless campers in Oppenheimer Park a chance to move into a hotel room with wraparound supports.

In a release, Shane Simpson, BC’s minister of social development and poverty reduction, said more than 320 homeless residents have been moved from camps in Vancouver and Victoria to temporary hotel accommodations so far.

No one will be asked to leave their tent without being offered a temporary housing option that meets their needs, Simpson said. Friends and family will be able to stay together, and “culturally sensitive” housing arrangements will be available, he added.

“Action needed to be taken for the health, safety and well-being of campers, and the front-line workers who support them,” Simpson said. “We knew this would be a challenging transition for people, but I am proud of the significant steps we have taken to provide safer and more secure options for people.”