The BC government announced it has secured hundreds of empty hotel rooms to temporarily house homeless residents during the COVID-19 pandemic.

According to the province, people experiencing homelessness will first be moved into hotel rooms or community centre spaces for up to six months before being transitioned to permanent supportive housing. Officials said they want to make sure people aren’t discharged back into parks or onto the street.

“In this provincial state of emergency, our priority is public safety: for those living in these encampments, neighbouring communities and front-line workers delivering services to these vulnerable people,” said Mike Farnworth, Minister of Public Safety and Solicitor General, in a release.

In a press conference Saturday, Farnworth clarified this is a public safety order, not a health one. Encampments have become unsafe as people cannot properly physically distance, wash their hands, or self-isolate if they develop COVID-19 symptoms, Farnworth said.

At the same time, travel restrictions related to the coronavirus pandemic have left many hotels in the province and around the world empty as tourists stay home. The province has signed lease agreements with participating hotels for the rooms, and will deep clean them and pay for any repairs before tourists stay in them again. 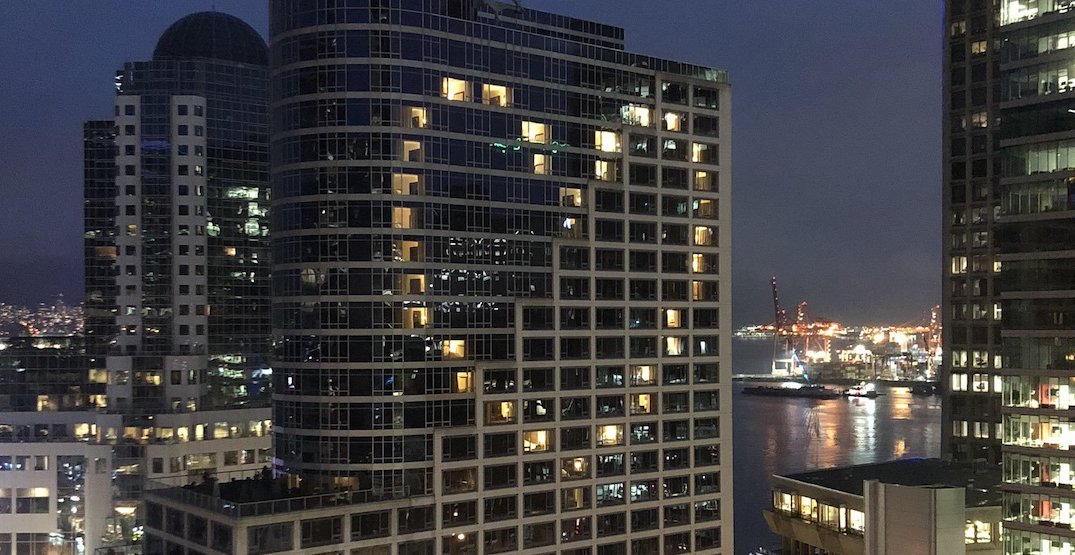 Some hotels have been lit up in heart shapes during the pandemic. @canadianpoli / Twitter

The province said it has secured 686 rooms in eight Vancouver hotels so far, and plans to offer them to residents camped out in Oppenheimer Park first. One hotel has been designated for people who test positive for COVID-19. At this point though,, officials said they don’t know of anyone living in the park who has the virus.

“I am very pleased the Province of British Columbia is using its powers and resources to provide much needed housing and wrap-around supports and services to help our most vulnerable neighbours in the Downtown Eastside,” he said in a statement. “These actions will help reduce overdoses and accommodate physical distancing during our two health emergencies.”

In Victoria, 324 hotel rooms have been secured for an estimated 360 people sleeping in Topaz Park and on Pandora Avenue.

All efforts will be made to keep couples and families together as they’re moved from parks to hotels, provincial staff said. Professional movers (and appropriate personal protective equipment) have been contracted to pack homeless residents’ belongings in bins and move them from parks or streets to the hotels.

The province expects 20 to 30 people will be moved per day for the next few weeks. The first moves will begin this weekend.

Moving into the hotels is voluntary, officials say.

People need to be referred to the hotel program by outreach groups working with the homeless population. An outreach worker will assess each individual, and they’ll be matched with a hotel based on their needs.

There will be designated floors in the hotels for women, youth, and culturally-specific spaces for Indigenous people. People staying in the hotels will also receive three meals per day.

Staff say hotels are a temporary solution, and their goal is to move park residents into longer-term supportive housing.

They’re looking accelerating construction of more temporary modular housing (TMH), saying thousands of new units could be available within the next year. Another option would be securing longer-term leases on the hotel rooms people are staying in.

Once in long-term supportive housing, residents will have access to wrap-around supports including a meal program, mental health and addictions counselling, a doctor, and a 24-hour building concierge.

Shane Simpson, Minister of Social Development and Poverty Reduction, said providing safe accommodation and essential supports to people experiencing homelessness has been a priority for the government for a long time.

“Now, more than ever, with the concurrent emergencies of the pandemic and the ongoing opioid crisis, it is time to implement long-term housing solutions that take care of and protect our most vulnerable people,” he said.