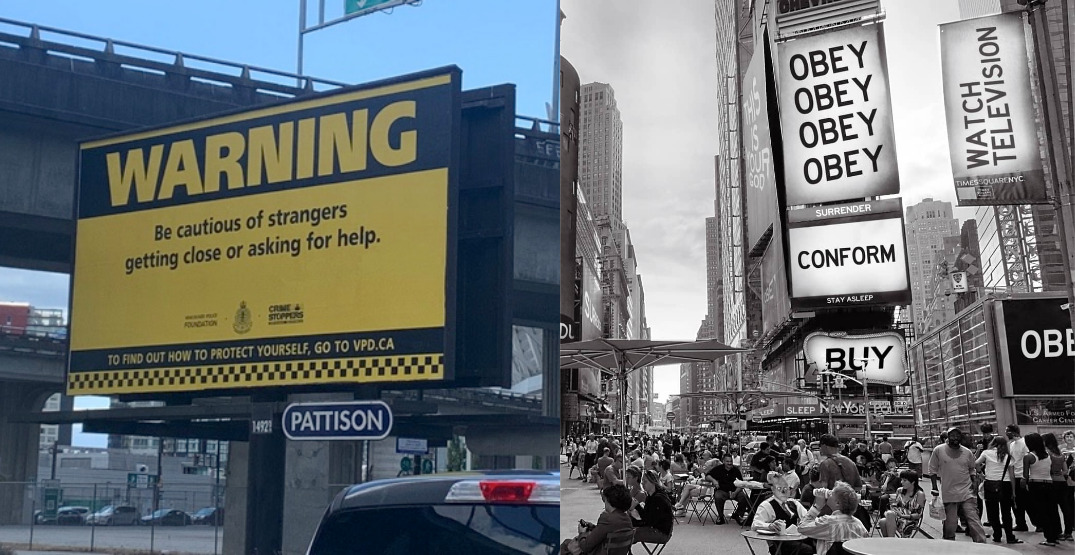 A billboard placed in downtown Vancouver by the police department has not registered the way they initially hoped.

The billboard reads, “WARNING, Be cautious of strangers getting close or asking for help.”

People have instead suggested that the billboard sounds dystopian, like something out of the John Carpenter movie, They Live.

In the film They Live, the main character Nada, played by Rowdy Roddy Piper, discovers a pair of glasses that allow him to see the world as it really is.

Vancouver City Councillor Christine Boyle was one of the people who felt that the messaging was off.

Instead what about: Be kind to strangers. Help others and ask for help. We’re safer and stronger together.#VanPoli #MutualAid #BetterTogether https://t.co/ebXO3LfTAc

The VPD responded to the initial tweet that sparked the conversation, saying the billboards were part of an initiative to stop distraction thefts.

“Our hope is that the billboards will catch the attention of Vancouverites so they can learn more about distraction thefts and how to protect themselves. We’re thankful to Metro Vancouver Crime Stoppers and the Vancouver Police Foundation for funding the billboards,” said Simi Heer, the director of public affairs for the VPD.

It certainly caught the attention of Vancouverites, but probably not in the way the VPD had hoped.

Someone went so far as to create a rough alternative.

I’m no Adobe expert, but try something like this. #GoBeKind pic.twitter.com/sF8TKTY39Y

“This morning, four people offered to help after my wife had a fall while out for a run, even though I was with her. Grateful that they offered. Hope we can find the right messaging so that kindness to and from strangers can continue,” he said in a tweet.