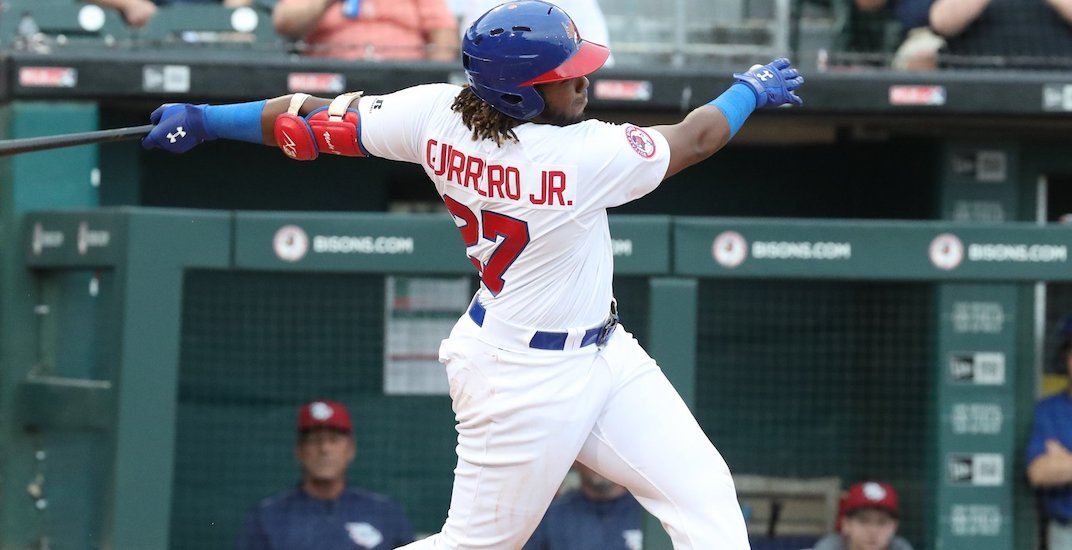 There aren’t enough superlatives to describe Vladimir Guerrero Jr. anymore. Since setting foot in the Jays organization in 2016, Guerrero tore the cover off the ball and hasn’t stopped since.

The entire baseball world will be watching Friday evening when Vladdy takes the field at the Rogers Centre. He’ll have plenty of former teammates, coaches and friends watching in awe as the 20-year-old officially takes the torch as the next Blue Jays superstar.

One of those people tuning in with great interest will be Carlos Pena. The former MLB slugger is an analyst with MLB Network and spent time with Guerrero last May filming video for a network special featuring the Blue Jays’ top-ranked prospect.

What Pena witnessed in New Hampshire was unlike anything he’d ever seen.

“It was impressive to me that despite the prospect of us having a camera in his face, he was just normal, like nothing fazed him,” Pena told Daily Hive. “Normally, a kid that young is impressionable. But he wasn’t.”

With a camera crew at his back, Pena said Guerrero simply went to work like any other day at the ballpark, hitting line drives all over the diamond. The tipping point of this hitting clinic was when Guerrero unleashed his eye-popping power by hitting a home run off the tee to the opposite field.

“That’s not normal,” Pena famously said during the segment.

Pena explained why it’s so difficult to hit a ball off the tee and send it over the fence for a home run.

“That’s a ball that’s stationary. He has to exert all the power into the baseball. There’s no help from the pitcher. There’s no pitch crashing onto the barrel. There isn’t. What you see is him applying all the force and all the power. That’s impressive.”

During the video, Guerrero hit the ball deep to right field, but Pena said that Vladdy called his shot, repeated his swing and went deep ten times in a row. Opposite field, off the tee, 10 times in a row with the cameras rolling.

“Not normal” is the perfect way to describe what Guerrero demonstrated that day.

Pena also spoke with Vladdy’s teammates and coaches during the filming of those MLB Network segments. What Pena noticed most was that despite all the attention and all the hype, Vladdy was extremely down-to-earth and didn’t let the success go to his head.

“He’s just nonchalantly having fun,” Pena explained. “I’m pretty sure he knows how good he is, but he doesn’t know how impressive he is. He’s totally unfazed by all this, that’s what impressive to me, from the moment I met him.”

During that hitting demo, Pena tossed balls to Guerrero and he’d hit them off the hotel beyond the outfield wall, which was close to 500 feet away from home plate.

“I’m not providing much of a force because I’m just throwing it underhand and he’s hitting it off the hotel in left-centre field in Manchester. That was sickening.”

“He was like, ‘I’m not trying to hit them out, they just leave. I’m not really trying to do that. I’m just trying to put the barrel on the ball.’ And then the ball leaves.”

.@FisherCats' Vladimir Guerrero Jr. on his tee work: “Always start working on the outside corner. …No thinking, nice and relaxed at all times, don’t stress too much. Get to the park happy, just ready to work.” @BlueJays #PlayBall pic.twitter.com/ECKxAbLw9q

Guerrero draws a few parallels to Pena’s skills set, except crank Guerrero’s power and plate discipline up to 11. Pena explained that Vladdy’s unprecedented ability to control the strike zone combined with his power makes him a deadly combination.

“Usually what you equate to power hitters is that they have a very violent swing, which sometimes translates to uncontrolled, unhindered aggressiveness. Yet, he has this controlled violence in his swing.

“It’s almost like he sets his sights in one spot, he’s hunting an area, he’s hunting a pitch, and if the pitch that’s thrown doesn’t match the coordinates that he’s set in his computer in his mind, then the bat doesn’t fire.

“For whatever reason, in the randomness of pitch sequencing, if the pitch crosses his radar and he picks it up on his radar, then it gets destroyed. His approach is very mature.”

The sky is the limit

With a world of hype surrounding his MLB debut, it’s easy for a rookie like Guerrero to get overwhelmed and caught up in the media circus. As a former major leaguer, Pena’s been through the pressure cooker environment of a big league debut, a pennant race and playing under the bright lights of the World Series.

From one former slugger to another, Pena offered this advice to Guerrero: “I always remind him, nothing more, nothing less. All you have to do is be you. I’m telling him, ‘try to enjoy all this, but don’t get swollen up by it.’ It’s amazing because he very humbly says, ‘yes brother, yes brother.'”

The 20-year-old has drawn comparisons to his Hall-of-Fame father, Vladimir Guerrero Sr., but also to the likes of two-time MVP and 11-time All-Star, Miguel Cabrera. There’s the potential that Guerrero could be even better than his Hall of Fame father and Cabrera, who’s a surefire inductee into Cooperstown.

As baseball’s consensus number one prospect and the top prospect the Blue Jays have seen in their 42-year history, the pressure will be enormous for Guerrero to meet these astronomical expectations.

“I don’t put any ceiling on him. I think he’s got the capability, he has the potential to be a 40 home run guy, over .300 hitter, on-base percentage of over .400, but that’s the potential.