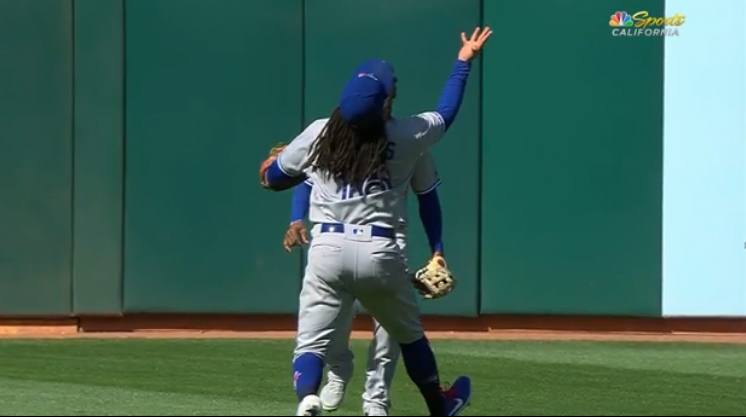 Freddy Galvis is not of this world. At the very least, the defensive wizardry he pulled off against the Oakland Athletics was.

Over the course of his eight-year career, Galvis’ glove has been his calling card. Interestingly enough, he leads most offensive categories for the Blue Jays. For old time’s sake, he made yet another highlight reel catch to add to his impressive resume.

If Galvis wasn’t already your favourite Blue Jay, he should be now.

A play like this needs at least a half-dozen viewings to truly appreciate the degree of difficulty on this play.

For one, Galvis was running with his back to the ball, just like a wide receiver going for a catch in the end zone. At the last moment, he leaned his head back to check that the ball was still heading in the same direction. Then he stretched out his bare hand to catch the ball and cradled it in his hand like a newborn kitten.

Catches like this have been made at baseball games before, but they’re usually in the stands by parents who are juggling a child in one hand and catch a foul ball in the other.

Freddy Galvis is that parent who bare-hands a foul ball with one hand while holding onto his child with the other hand. pic.twitter.com/Ha76ey6iBk

This is a subjective opinion, but Galvis’ catch might be one of the top 10 best defensive plays by a Blue Jays player ever. It belongs up there with Kevin Pillar’s wall-leaping catches, Devon White’s catch in Game 3 of the 1992 World Series, Josh Donaldson’s dive into the stands to preserve Marco Estrada’s n0-hitter and any number of defensive gems from John McDonald.

Marcus Stroman couldn’t believe what he saw on the field and showed his appreciation for Galvis’ insane play.

That play by @freddygalvis10 might have been the best play I’ve ever seen live. Wow! @BlueJays

Galvis is one of the most pleasant surprises for the Blue Jays in 2019. Along with his impressive defence at shortstop, the 29-year-old leads the team in home runs and slugging percentage.

It’s still very early in the season, but this play might stand up as the very best from the Blue Jays’ 2019 campaign.