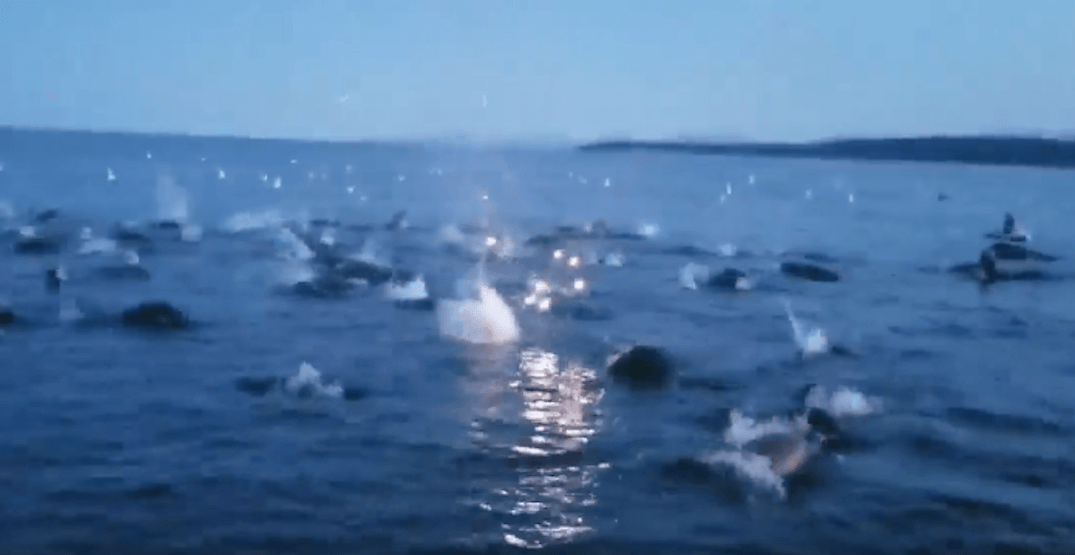 The person who posted a video which shows a man tossing an explosive into a group of sea lions writes that sea lions “need to fear humans once again.”

The video, posted to the Pacific Balance Pinniped Society Facebook page by Thomas Sewid shows a man tossing an explosive device into a group of sea lions, which then disappear underwater.

Seconds later, the device detonates and the sea lions quickly dive under the water.

In the video’s description Sewid says groups of seas lions is what “herring boats are dealing with at night right now.”

Theoretically, he writes, “darkness brings the herring to the surface, which makes it easier to catch them. The test boats are to toss rings with nets and drag up about fifty pounds of herring to sample for roe percentage content from the nets.”

Sea lions in the water before the explosion (Video screencap)

But due to the high number of resident Stellar sea lions and thousands of invasive California sea lions, the herring are being dove upon, which “scares them to stay deep,” beyond the reach of nets.

He writes that crews are “doing all they can” to get a set so they can get a representative herring samples to test.

“This is supposed to be a multi-million dollar fishery, yet stupid obsolete laws impede proper sampling of the herring stocks all due to too dang many sea lions,” he adds.

Sewid writes that the bear banger is used to scare the sea lions off so the work can be conducted.

“It’s always to no avail, for in a few minutes they return,” he adds. “Keep in mind what you hear and see, four times as many are down diving on the massive herring school 20 plus fathoms below the boat.”

Sewid encourages people to “get some education right now what these test fisher crews and we commercial seiners are about to embark on,” which he said sometimes includes catching over 500 tons of herring or more in one set.

“We are trained not to make any sudden loud bang aboard ship, for if the massive school in net panics, they can dive for the depths,” he writes. “This happens and large seine boats are pulled over. We have lost many fellow fishers when seiners capsize.”

He notes that this includes his great uncle, who “drowned not ten years ago in The Gulf of Georgia when this happened during a snowy night of herring fishing.”

He points to the all the sea lions in the video  feasting on “hard caught” herring. “It’s very probable that one day or night the mass of sea lions may panic a caught mass of herring to dive for the depths,” he adds. “We pray this never happens, but the stupid protection laws are only adding to the chance of this happening.”

In an email to Daily Hive, the Department of Fisheries and Oceans (DFO) said it is aware of the video and noted that officers from Nanaimo and Campbell River are investigating the incident to see if the incident contravenes Section 7 of the Marine Mammal Regulations.

These regulations make it illegal to disturb, harm or kill marine mammals, and charges “may be laid,” the department said.

The DFO is also reminding people that it is illegal to disturb or harm marine mammals by any means, including by use of acoustic deterrents.

“Anyone witnessing a potential contravention of the Marine Mammal Regulations should contact their local fishery officer detachment or call 1-800-465-4336 (all of British Columbia) or 604-607-4186 (greater Vancouver),” they added.

On Thursday, the Vancouver Aquarium said it learned of the video on Wednesday night, and is concerned by the activity in it.

“Explosive devices such as ‘bear bangers’ certainly do cause injuries to the animals, depending on their proximity to the device when it explodes,” said Vancouver Aquarium head veterinarian, Dr. Martin Haulena.

“Sea lions are naturally curious, and in this case, at least one of them approached it closely just before it went off.”

Haulena told Daily Hive that in the past, he and his team have found animals with injuries to the mouth, face, and eyes that we believe are from ‘bear bangers’ and similar devices.”

He added that an explosion like this can also cause permanent damage to their hearing.

“As a wildlife veterinarian, I’ve been on the water many times and had curious sea lions gathering around my boat like that, just checking us out,” he said. ” It’s a magical wildlife experience. I can’t understand why someone would want to do something so appalling to ruin it.”