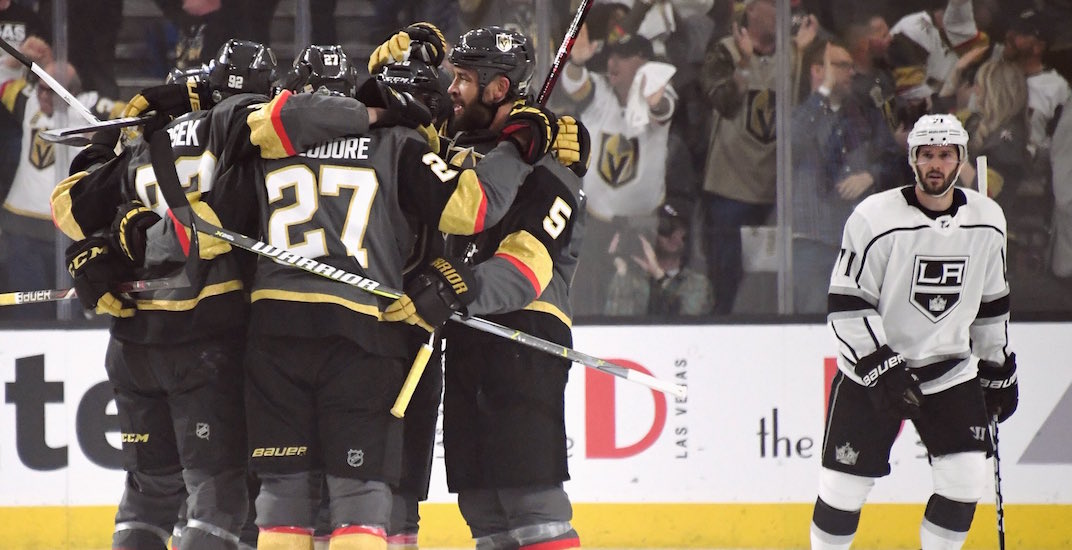 They’re going to make a Hollywood movie about this team.

In what already qualifies as one of the most amazing stories ever to hit the NHL, the Vegas Golden Knights have a chance to make it even better.

On Tuesday, they completed a first-round sweep of the Los Angeles Kings – the first time an expansion team has completed the feat.

The @GoldenKnights became just the second NHL team to sweep its first postseason series, but the first to do so in its inaugural season. #NHLStats #StanleyCup pic.twitter.com/xNU9SSsG9r

To make it extra sweet, the only player to score for Los Angeles in the clinching game, Brayden McNabb, was the player the Kings gave up in the expansion draft. It was the first playoff goal of the 27-year-old’s career, who has only 12 regular season goals in 314 regular season games.

Because of revamped expansion rules, we knew Vegas would be the greatest first-year team in league history. But nobody – not even the Golden Knights – thought they’d be this good.

Vegas picked players with an eye on the future, collecting five extra draft picks last June, including two additional first-rounders. That means they have a chance to be even better than they are this year.

And they’ve been pretty damn amazing.

Vegas earned 109 points during the regular season – more than the Toronto Maple Leafs have ever totalled in their franchise’s history. It was the fifth-best record in the NHL, and placed them first in the Pacific Division.

While some players were already well known to hockey fans – guys like Marc-Andre Fleury and James Neal chief among them – the Golden Knights found a number of diamonds in the rough.

William Karlsson scored six goals with Columbus last year. He has 43 goals this season as the team’s No. 1 centre. Jonathan Marchessault scored 30 goals in Florida a year ago, but improved his point total by 24 with Vegas this season – scoring 75.

Other players like David Perron (66 points), Reilly Smith (60), Erik Haula (55) and others have all set career-highs with Vegas.

Lady Liberty is geared up for the playoffs 🤩#KnightUp pic.twitter.com/0ACKB2LB06

We thought Vegas would be decent at forward and in goal, but I’m still not sure how they’re doing it with their defence corps.

Their top blueliner, Nate Schmidt, played just 15:28 per game with Washington last season. Deryk Engelland played 18:19 for Calgary, and McNabb just 15:03 in LA. Those three, along with 22-year-old Shea Theodore, play more than 20 minutes a night for Vegas.

Guess it shows that some guys just need to be given a chance.

shoutout to all of you watching from Mandalay Bay Beach