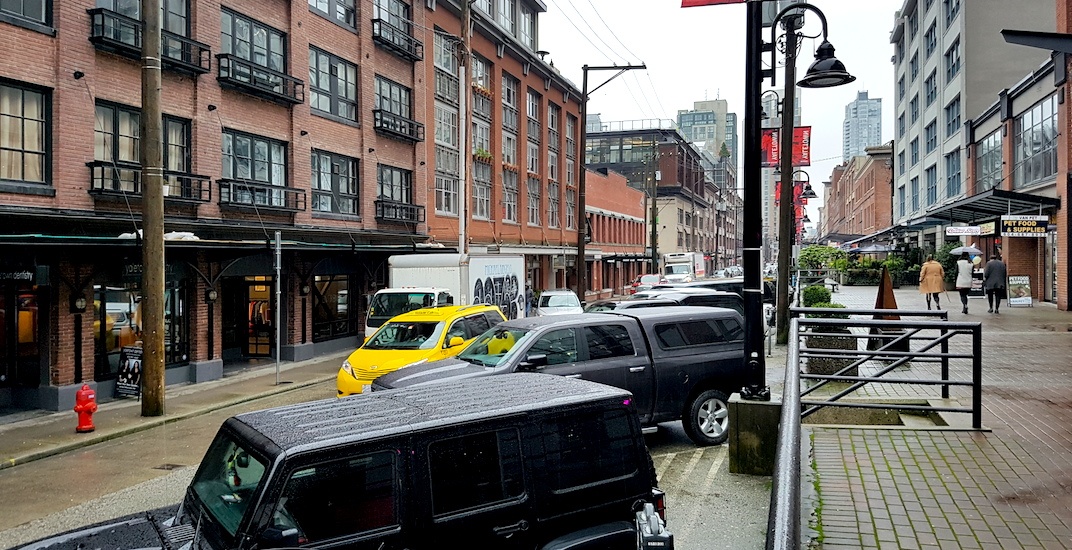 Yaletown’s vibrant business community could suffer if a plan to remove more than half of the street parking spaces on Hamilton Street and Mainland Street proceeds, warns the business improvement association that represents the district.

Annette O’Shea, the executive director of the Yaletown Business Improvement Association (YBIA), told Daily Hive the City of Vancouver will be removing 150 stalls from both streets by replacing the angled parking stalls with parallel parking stalls.

Although in an email, the City of Vancouver said its changes will result in about 80 lost stalls.

These parking reductions are scheduled to begin March 1.

The municipal government claims this is a request from the Vancouver Fire Department over the need of creating wider access for the new, larger fire trucks.

In fact, according to O’Shea, the YBIA was not informed of the planned changes until late December, and the organization’s first meeting with City planners only occurred in mid-January, even though planners have been working on the project for a year.

“We decided to go to the media because the City is not listening and has not done any sort of community outreach,” she continued.

She says the YBIA has proposed an alternative plan of creating fire access by keeping the angled parking but removing the parallel parking along the sidewalk, which would reduce the number of lost parking stalls to 60.

However, the City was not receptive of the idea as they believe people park easier in parallel spaces, but O’Shea contends that angled parking is currently only an issue for some drivers because the parallel parking is in the way.

Another idea to regain some of the lost parking spaces within laneways and some commercial loading areas, which would create about 30 stalls, was shot down.

“If we’re going to lose some spots, let’s lose the parallel. But help us gain back some spots,” she said.

The area is already dealing with challenges with parking as the result of changes over the years to EasyPark lots in the area, which have seen a major reduction in available daytime or hourly parking stalls in favour of expanding monthly parking spaces.

O’Shea says the City is proceeding with the plan even though it knows the street parking stalls on both streets are in high demand. Data collected by the municipal government shows the stalls have a 92% usage rate in the daytime and a 97% usage rate in the nighttime.

“We are fighting really hard to make the impact as small as possible. If we go ahead with the City’s plan, if we go with it without a fight, there is no question that we will lose businesses,” she said.

“This City has never had a success where they have removed significant commercial parking and had the area remain healthy.”

She also notes that Yaletown is home to a robust cluster of medical clinics, which have patients that rely on parking stalls within a very short walking distance.

There have been major changes to parking across the City in recent years, particularly within the downtown Vancouver peninsula where stalls have been removed for bike lanes and Mobi bike share stations.

Additionally, vast supplies of free parking stalls in the West End and the Olympic Village have been replaced with pay metered parking.

And change is coming to the long stretch of parking stalls along Spanish Banks Beach in West Point Grey. Starting this year, the stalls along the beach will become pay parking throughout the peak season from early-April to late-September.

Note: This article has been edited to include a comment from the City of Vancouver.