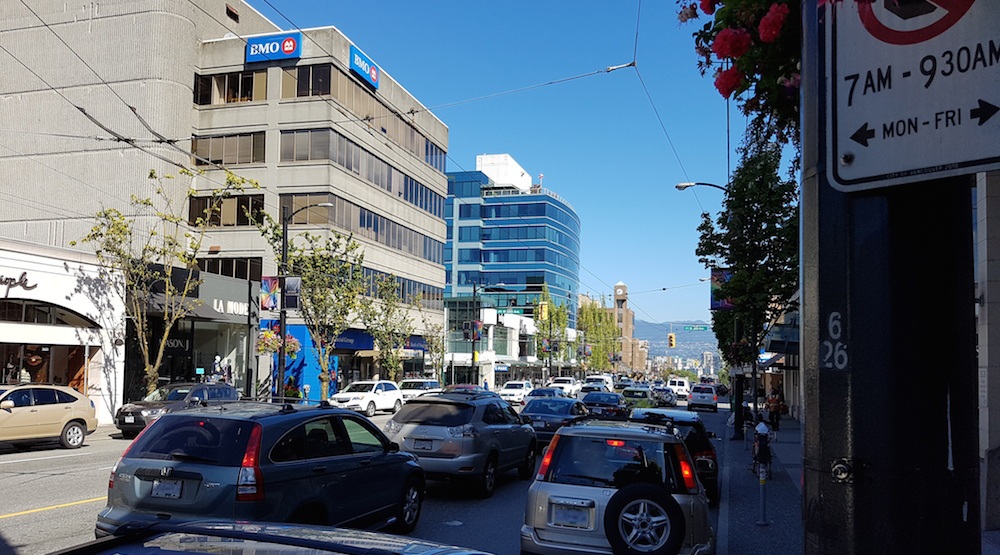 It’s 5:56 pm on a Wednesday evening and tens of thousands of people who work within the downtown Vancouver peninsula, but live elsewhere, are still making their way home, whether it be by their personal vehicle or public transit.

A trolley bus traveling southbound on Granville Street is already running six minutes behind schedule as it begins to cross the bridge across False Creek, and it is delayed even further as it meets complete gridlock at the south end of the Granville Street Bridge.

The time is now 6:05 pm and the no parking rule on the southbound direction during the afternoon rush hour period, established as from 3 pm to 6 pm, has just come to an end even though the traffic conditions are still very much rush hour-like.

Traffic is not moving at all, and now vehicles including four trolley buses are backed up 400 metres onto the bridge deck.

There is no accident ahead. As drivers begin to crawl further southbound, they realize that just two cars parked on Granville’s southbound curb between West 5th Avenue and Broadway are responsible for the mayhem. And this continues all the way to West 16th Avenue

For this reason, the Canadian Automobile Association (CAA) has ranked Granville Street from Broadway to West 16th Avenue as Canada’s 15th worst traffic bottleneck – right behind and ahead of two Montreal highways.

This is just one example of how Vancouver’s curbside street parking is impacting drivers. It’s always been an issue, but this summer it has been even more pronounced with drivers avoiding the Burrard Street bridge due to construction. Many drivers are taking the Granville Street Bridge as the nearest alternative route, but there have been no changes to street parking hours to accommodate the extra traffic.

And with much of Burrard Street south of False Creek and West 12th Avenue between Arbutus and Fir streets shut down for water and sewer upgrades, there has also been a surge in traffic along Broadway throughout the day given that it’s the closest east-west arterial route in the area. Nevertheless, street parking hours on Broadway remain the same.

The same can also be said for the sewer main replacement that necessitates the closure of Southwest Marine Drive, and the effects of that can be seen with the rise in traffic on West 41st and West 49th avenues where parking restrictions remain the same.

Even when there is no road construction, street parking is still a major contributor to traffic congestion when another lane of flowing traffic comes to a halt to allow a car to park on the curb or make its exit – and this is anything but a quick process for less-skilled drivers. The City of Vancouver typically defines rush hour as between 7 am to 9:30 am and 3 pm to 6 pm, but rush hour conditions on many routes now extend beyond those hours.

However, reducing street parking hours would likely be an immensely difficult proposition for a municipal government that has become so dependent on revenue gained from meter parking.

A case in point: Several years ago, the City even asked organizers of a proposed Car Free Day festival in Yaletown to pay for the lost revenue from meter parking spots used for the event. As this would have been cost prohibitive for the Yaletown Business Improvement Association, the event never went ahead.

And during this year’s Canada Day and Celebration of Light festivities, traffic on major routes came to a standstill both in and out of the downtown core, largely due to the fact that cars were parked on the street.

It took nearly 45 minutes for vehicles to get from the Stanley Park Causeway to Burrard Street even 30 minutes after the Canada Day Parade ended. Eastbound traffic that normally flows on the main West Georgia Street arterial was being diverted to West Pender Street, which has two lanes on the eastbound direction. With West Georgia Street still closed, that meant almost all of the eastbound traffic coming from West Georgia was trying to funnel into one eastbound lane along West Pender Street. During rush hour, that curbside lane is used for free flowing traffic.

About 90 minutes after this year’s Celebration of Light’s USA night fireworks, close to a hundred people were still seen queuing at a number of 99 B-Line bus stops along West Broadway. From Granville Street at the westbound stop, buses were running at least 50 minutes behind, not because of the lack of buses, but because buses were stuck in gridlock. There were 12 B-Line buses literally trapped in the eastbound direction within a three block stretch of Broadway from Arbutus to Burrard. Again, the curbside lanes – the bus-only lanes during rush hour – were used for parking.

According to the budget for this fiscal year, the City expects curbside meter parking will rake in $55.1 million, accounting for about 4% of the year’s revenues. This is up from $31.3 million in 2009 and $49.5 million in 2015, and that does not even include the millions in fines issued by parking enforcement officers. Additionally, the City estimates that parking fines this year will generate $16.4 million or about 1% of total annual revenue.

Altogether, that is more than enough revenue to keep the Vancouver Public Library’s network of libraries across the city operational.

Another hurdle with reducing street parking hours lies with local businesses who believe their business would take a major hit when a curbside lane is taken away for flowing traffic like an HOV lane or a bike lane.

The last time there was a major implementation of bus-only lanes in Vancouver was a decade ago in 2006 when the curbside lanes along much of Broadway were turned into bus-only lanes during the rush hour period. The queue jumping lanes quickly became a permanent fixture after planners learned it made the 99 B-Line and trolley buses more reliable.

As a maturing and growing city, Vancouver needs to let go of its attachment with street parking. In most major cities, street parking is non-existent at all times of the day along most major routes in and near the urban core.

To date, the municipal government has only shown a willingness to reduce street parking and any associated meter revenues for cycling projects, namely bike lanes and the Mobi bike share program. Approximately $800,000 in meter parking revenue will be lost to make way for many of the bike share stations being installed across downtown Vancouver and the Central Broadway Corridor.

Along with poorly timed lights, in most other major cities this would altogether be seen as inadequate traffic management, and perhaps that is partially intentional to encourage more people into public transit and the ‘active transportation’ modes of walking and, especially, cycling.

One rarely discussed consequence from clogged major arterial roads is how frustrated drivers turn to side streets and even alleys in residential neighbourhoods. Local roads become through-traffic routes, and this leads the City to believe that it needs to implement more traffic calming methods (speed bumps, roundabouts, traffic diverters, and four-way stop signs) within neighbourhoods to keep traffic on already-congested arterials with street parking.

It’s time for the City to reevaluate its street parking policies as much of it makes zero sense.