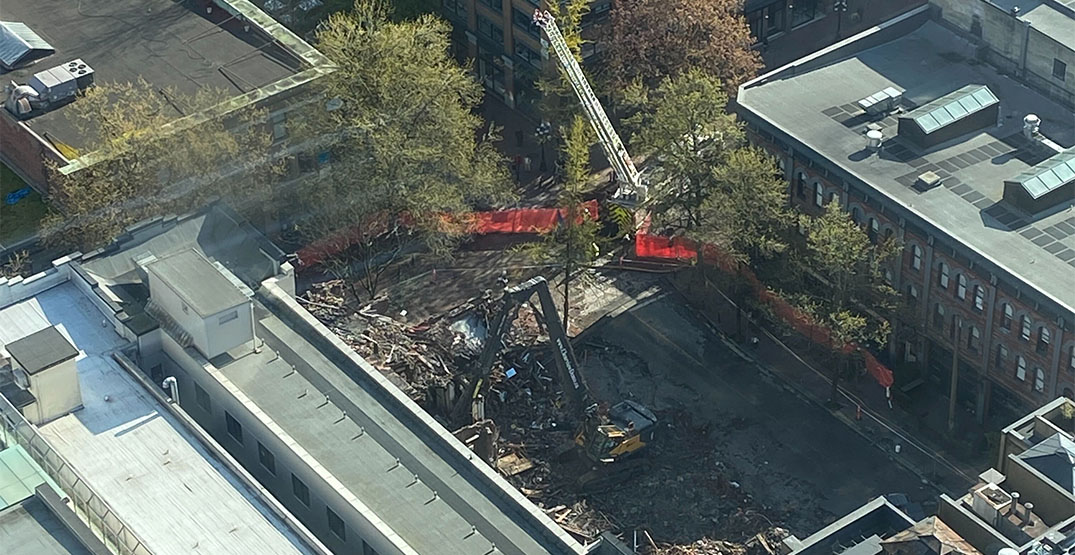 The demolished Winters Hotel seen from above. (Daily Hive Vancouver)

Over three months after a devastating fire destroyed the Winters Hotel in Vancouver, the BC government is launching an inquest into two deaths linked to the blaze.

BC Public Safety Minister Mike Farnworth announced the news in a statement from the Ministry of Public Safety and Solicitor General.

“The fire that destroyed the Winters Hotel in Vancouver on April 11, 2022, tragically resulted in the death of two people.”

In late April, Vancouver Police released the names of the two victims who lost their lives in the Winters Hotel fire. They were 68-year-old Mary Garlow and 53-year-old Dennis Guay.

Later in the month — after delays due to the discovery of the bodies — the demolition of the historic building was finally complete. The inquest will help determine exactly what led to the deaths of Garlow and Guay.

“We are deeply saddened by this terrible loss of life,” said Farnworth.

“Today, I have directed a coroner’s inquest into these deaths. Once the coroner’s investigation has gathered sufficient evidence, an inquest jury will hear evidence from the witnesses under oath and make findings regarding the facts of the deaths. The jury may also make recommendations aimed at preventing deaths under similar circumstances.”

Along with announcing the inquest, he also thanked Vancouver first responders for their work in helping battle the blaze at the Winters Hotel and supporting those affected.

He went on to state that the inquest could help people in SROs move forward.

“Everyone deserves to be safe in their homes. Recommendations from the inquest into the Winters Hotel deaths could help prevent fires in single-room occupancy buildings and save lives.”