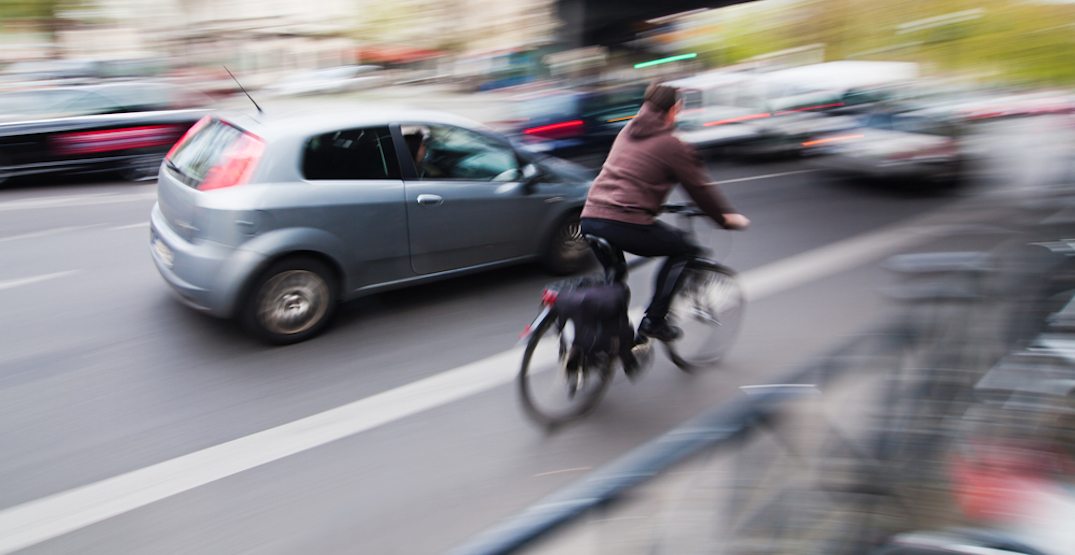 Vancouver neighbourhoods often make for a pretty jaunt outdoors for cyclists and pedestrians, but a new study finds these areas are more dangerous for both.

Research conducted by the University of British Columbia found that neighbourhoods with high bikeability and walkability scores show higher crash risks to cyclists and pedestrians.

Published in the journal Transportation Research Record, the study pulls from five years of crash data from auto insurer ICBC in 134 traffic analysis zones to identify areas as high-risk zones in Vancouver, focusing on pedestrian–motor-vehicle and cyclist–motor-vehicle crashes.

“Among the public, there is an implicit assumption that ‘walkable’ and ’bikeable’ means safe for walking and biking, but these indices do not actually include objective measures of safety,” Tarek Sayed, UBC professor and the study’s principal investigator, said in a release. “When we objectively analyzed the data, we found that the zones with better bikeability and walkability scores had higher collision risks. We controlled for traffic volume and pedestrian and cyclist numbers, so this reflects actual collision risks to individuals.”

By comparing crash sites to their walk scores and bike scores, UBC discovered that although these zones were categorized as being ideal for walking and biking, they were “associated with higher risks of pedestrian and cyclist crashes.”

In Vancouver, the highest collision risk to cyclists were found in the downtown core and in Strathcona and Mount Pleasant. All of these regions rank highly on the Bike Score index.

“If these indices are clearly defined as a reflection of the ease of reaching a destination, they may be good. But we want to make clear to the public that they do not indicate safer areas for walking and biking,” Sayed said. “We need to have two indices — one for bike attractiveness and another one for safety.”

Areas with a high concentration of beautiful attractions, like Vancouver, increase the amount of walking and cycling trips to those areas, creating conflict with road users. Walkability and bikeability scores do not claim to reflect safety, but the researchers suggest this should be changed.

They propose a new “composite Bike Safety Index” that takes both appeal and safety into account. The release says that areas of Vancouver that rate highest in this index include Point Grey, Stanley Park, False Creek, the River District, Kerrisdale, and along the Fraser River in Marpole.

“The very low correlation between bike safety and bike attractiveness in our research indicates the need for this composite index,” said Sayed. “If you compare the maps using the Bike Safety Index ratings compared to bike attractiveness ratings, they look very different.”