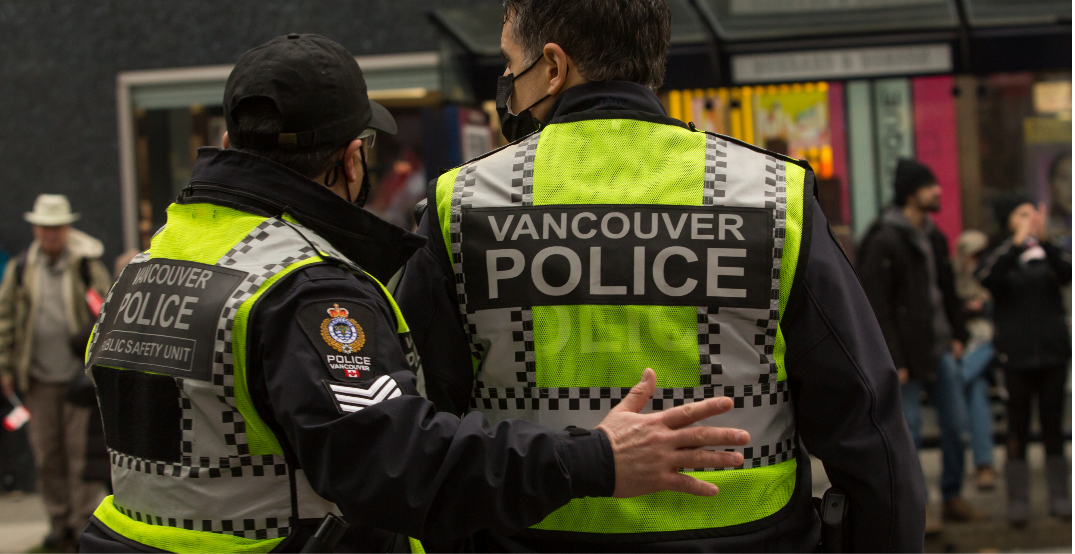 This past weekend was a violent one for Vancouver, including a machete attack, multiple stabbings, and other unprovoked attacks.

It also included another bear spray attack and someone having a fake pistol pulled on them.

The Vancouver Police Department is investigating this series of violent incidents over the weekend, including an unprovoked machete attack that took place near Main and Hastings by the Empress Hotel as two people were loading luggage into a waiting taxi.

A VPD officer was flagged to the incident when they discovered that two people had been “slashed with a machete.”

The attack left both victims with neck and head wounds that required them to be hospitalized, but they’re expected to recover. Both victims told the police they did not know the attacker, who police describe as a heavy-set man in his forties who was wearing a grey t-shirt, blue raincoat, and carrying an umbrella.

“He was last seen running south from the crime scene.”

The suspect has not been identified.

Four other violent incidents over the weekend

The machete attack was just one of five different violent attacks that Vancouver police are sharing information about.

On Saturday, a 27-year-old man reported that he was stabbed and bear sprayed by six to eight teens around 3:30 am while walking near Drake and Seymour streets.

He found his own way to the hospital and told police he was walking out of a lane when attacked for no reason. His injuries are non-life-threatening and the suspects have not been identified.

In a different incident, a woman who was riding a bus on Saturday around 6:15 am noticed another woman glaring at her. She got up and moved to a different spot but ended up being followed by the glaring woman.

When she got off the bus, she was pursued and slapped in the face for no reason by West Pender and Hornby Streets.

In yet another incident around the same time on the same day, a man was walking around English Bay when a suspect pulled out a fake pistol and pointed it at him. Someone else called 911 thinking that the gun was real. VPD was able to respond and arrest the suspect, who was found to be in possession of an airsoft gun with two loaded magazines.

“Police believe the suspect had been partying overnight at the beach when he got into a confrontation with a stranger.”

The final incident took place on Sunday after The Killers concert. A 23-year-old man from Surrey was leaving Rogers Arena around 11:30 pm when he was confronted by a group of strangers and stabbed in the abdomen. The victim was taken to a hospital and is expected to survive, but the suspects fled and have not been located.

“With the end of COVID restrictions and the start of summer, Vancouver police expect to see a surge of people coming to the city to enjoy our beaches, parks, shopping, and entertainment,” said VPD Sergeant Steve Addison in a statement.

“More people always bring more calls for police service and the potential for increased conflicts. We’ll continue to make public safety our top priority and we encourage people to call 911 if they see a crime in progress or need help immediately.”