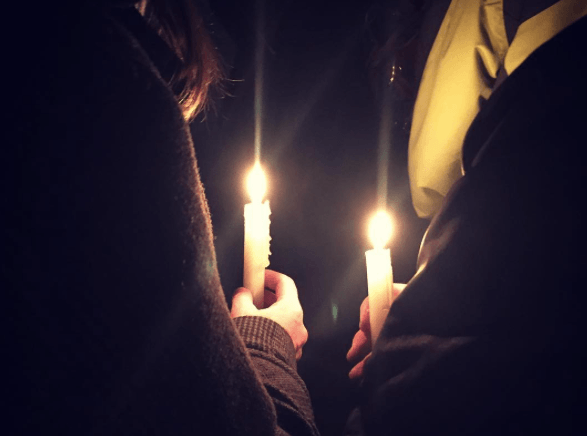 Last night, Canada chose love over hate with vigils being held across the country for the victims of Sunday night’s terror attack on a mosque in Sainte Foy, a suburb of Quebec City.

In response, cities across Canada held vigils honouring the victims.

In Vancouver, crowds gathered at Al Masjid Al Jamia Vancouver, lighting candles and holding signs denouncing the acts of violence and expressing support for the Muslim community in Canada.

Young children, people of different faiths, firefighters, city councillors, Vancouver Mayor Gregor Robertson and members of the police came together to show that love and tolerance is what we need more of.

Another vigil is scheduled at the mosque this Saturday.

If a group of complete strangers from all walks of life can hug each other inside a mosque, at midnight, all is not lost. #Vancouver pic.twitter.com/rFtn89Ymcy

Speakers have wrapped, crowd now being invited into mosque pic.twitter.com/Q53FouomHA

“The ban on Muslims, the hatred has no place in Canada.” pic.twitter.com/tLhGcFnsbq

“Thank you, you came to share our grief” pic.twitter.com/USpqVpLUs7

Crowd at #vancouver #vigil is very diverse. Many say they fear creeping intolerance, feel the need to stand together pic.twitter.com/kbvxrr4aKI

Mayor Gregor Robertson speaking in solidarity at the Vancouver #vigil for the victims of the #QuebecCityMosqueShooting. pic.twitter.com/MTMJl87vns

Messages among the many flowers left upon the doorstep and the Front Door of Masjid Al-Jamia #Vancouver..

Lighting my Candle for Vigil in front of Masjid Al-Jamia #Vancouver earlier tonight….

Sincerely expected MAYBE Two Dozen, at most, to turn out tonight in #Vancouver for the Vigil.