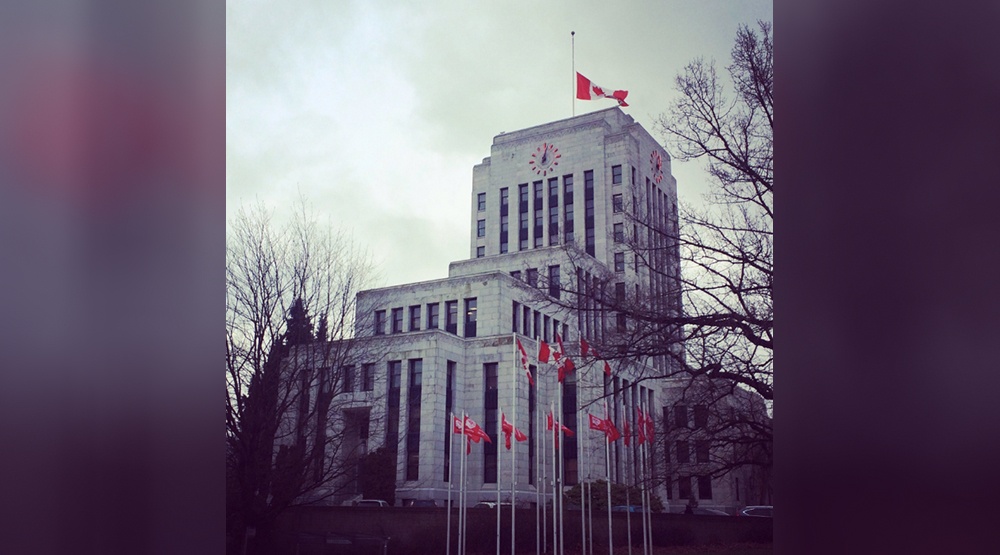 The giant Canadian flag at Vancouver City Hall is flying at half mast for the victims of the Quebec City terror attack. (Photo by: City of Vancouver / Twitter)

Outdoor lights are being dimmed at landmarks and public buildings across Canada and elsewhere in the world, and Vancouver City Hall is no exception.

The City of Vancouver says the lights at the City Hall building will be dimmed tonight in solidarity with Quebecers and the victims of last night’s deadly terror attack at a mosque in Quebec City. This is in addition to the City’s act of lowering the giant Canadian flag on the rooftop of City Hall to half mast.

We are standing with many cities around the world by dimming the lights at City Hall tonight. #QuebecCityMosqueShooting #vanpoli

The flag is at half-mast at #Vancouver City Hall, in memory of the victims of the #QuebecShooting. pic.twitter.com/spUZ4PsyJg

In contrast, following the series of Paris terror attacks in November 2015, the municipal government changed its exterior lighting to blue, white, and red – the colours of the French flag.

Over at BC Place Stadium, operators say the stadium’s exterior lighting display is scheduled to glow red and white with Canada’s Maple Leaf ahead of the Canada’s Women’s National Team match against Mexico this Saturday. This display of the Maple Leaf will double as the stadium’s tribute to the victims and as “a symbol of peace, diversity and inclusion”.

The lights at the Eiffel Tower in Paris and Toronto City Hall in downtown Toronto will also be extinguished tonight.

I will turn my lights off tonight, at midnight, to show my support to Quebec and Canadian people. #EiffelTower pic.twitter.com/Tf3VCOjcjh