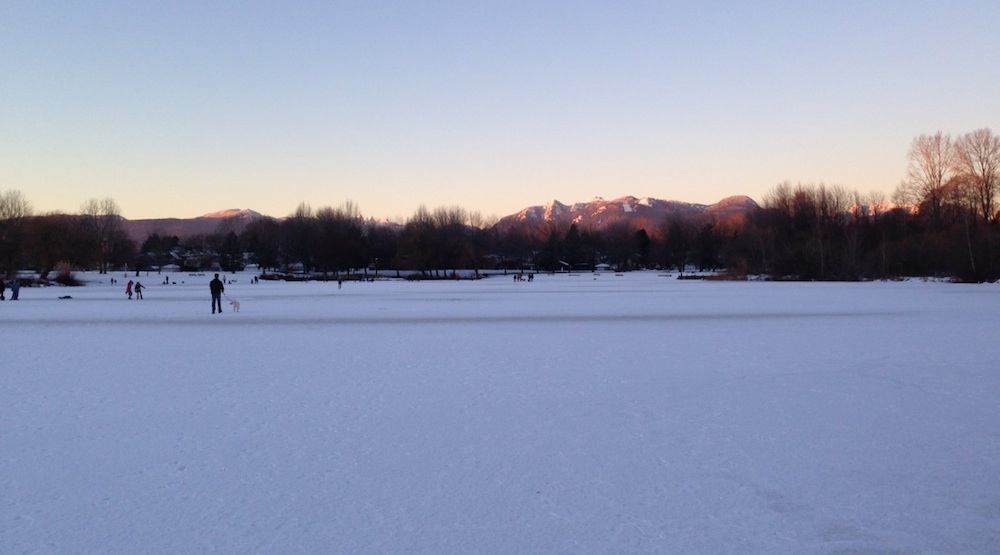 Forget about skating on the sheet of ice found on many side streets across the city of Vancouver, there’s now a frozen lake surface nearby where you can safely do that.

Earlier this evening, the Vancouver Park Board announced that Trout Lake in East Vancouver is officially open for ice skating given that it has completely frozen over. The ‘Danger’ signs found on the ice surface have been removed from the lake surface for the time being.

Over the past month of cold weather, the lake has developed an ice surface thick and stable enough for residents to come to the lake and enjoy the winter magic with their own pair of skates.

For a lake or pond’s ice surface to be safe enough for ice skating, it needs to have an ice sheet thickness of at least five inches. Currently, Trout Lake’s ice surface is solid and over five inches thick, according to the municipal government.

However, skaters should note that skating on the lake is unsupervised and conditions could change over the coming days. As well, at this time only Trout Lake is safe for ice skating – other surfaces such as Lost Lagoon in Stanley Park and the ponds at Vanier Park and Granville Island are still not safe.

While more snow is in the forecast, overnight temperatures will warm up significantly from the low of -7°C expected tonight to -1°C by Thursday night. Overnight lows will hover just below or above the freezing point for the coming week.

By Friday morning, there could be a new thick layer of snow on top of the lake’s ice, with snowfall expected to resume beginning Thursday night.

When conditions are cold enough, Trout Lake is one of Vancouver’s best outdoor skating lakes not just for its sheer surface size but also its slow underwater current.

Ice at ponds and lakes in Vancouver were regularly strong enough to support skaters until the 1980s due to colder winter temperatures. The last time this happened was in 1996, the same winter season that Vancouver experienced one of its greatest blizzards in recorded meteorological history.