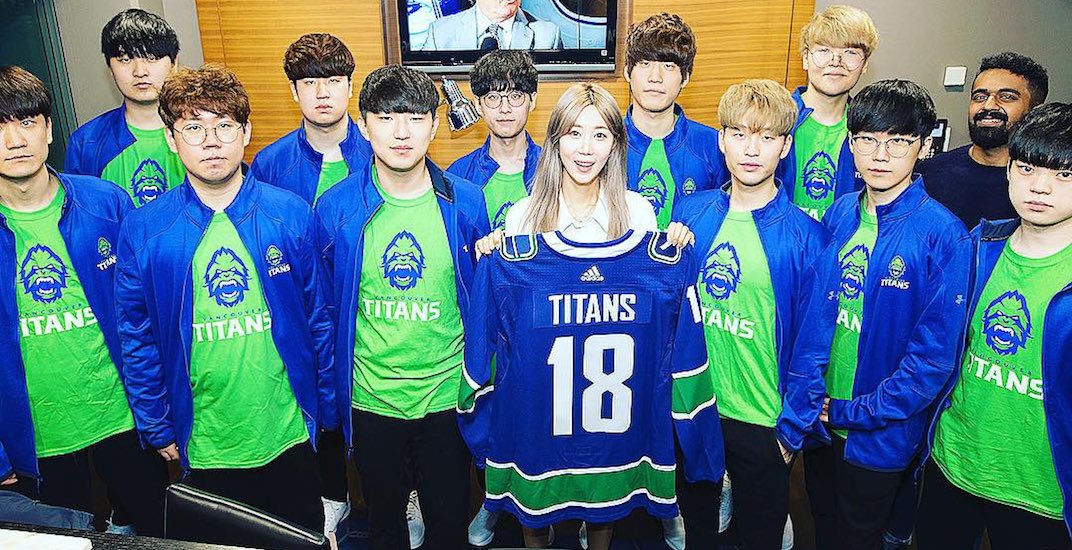 Like the hockey team that owns them, Vancouver’s new professional eSports team will wear blue and green.

The Vancouver Titans were unveiled during the second intermission of Saturday’s Canucks game, as the city’s newest pro team. They’ll play in the 20-team Overwatch League, which is represented by franchises on three different continents.

“We are thrilled to officially launch the Titans today and to bring a premier global eSports team to Vancouver,” Canucks owner Francesco Aquilini said in a statement. “In choosing our identity we wanted to introduce a team that would resonate with fans in the Pacific Northwest. With a local feel and an experienced, skilled team, we are ready and can’t wait to have the Titans compete at the highest level in eSports.”

The Titans’ logo depicts a Sasquatch, containing some subtle designs within it.

“The Vancouver Titans colours will be blue (primary), green (secondary), and white (accents) to represent Vancouver’s greenery surrounded by the Pacific Ocean,” reads a press release. “The colour shades signify a vibrant, contemporary take on the Vancouver Canucks palette, but still allow the Titans to develop their own West Coast style.

“The Titans logo features a Sasquatch, a folklore figure synonymous with the Pacific Northwest, with the monogram of a ‘V’ in the nose for Vancouver, and a mountain range on the top of its head. The team name of the Titans is indicative of the traits associated with the Sasquatch–a powerful, imposing, and mythical being.”

Overwatch is a fast-paced first-person shooter game that involves two teams of six facing off against each other. Players can select from their choice of more than 20 in-game characters, each with their own unique playing-style and design.

The #OWL2019 season is just around the corner!

Find out when we return, the season structure, & more.

Teams are franchised and based in certain cities. Players are signed to minimum salary contracts and team owners have the ability to trade and acquire additional players through free agency.

The Titans’ roster was also unveiled, which included former members of RunAway, one of the most sought-after Overwatch teams in the world. The team most recently won Overwatch Contenders 2018 Season 2: Korea, and defeated the Overwatch South Korean World Cup team in an exhibition match.

The Championship RunAway crew are the Vancouver Titans! Though I have one tiny little question: why are they not in pink jerseys? #OWL2019 #OverwatchLeague #VancouverTitans #RUNAWAY #Overwatch pic.twitter.com/VK2xiNpNts

The eSports acquisition by the Canucks came not long after Rogers Arena hosted sellout crowds to watch the Dota 2 International competition.

The Titans will play out of Activision Studio in Burbank, California initially, but the plan is to hold games at Rogers Arena by 2020.