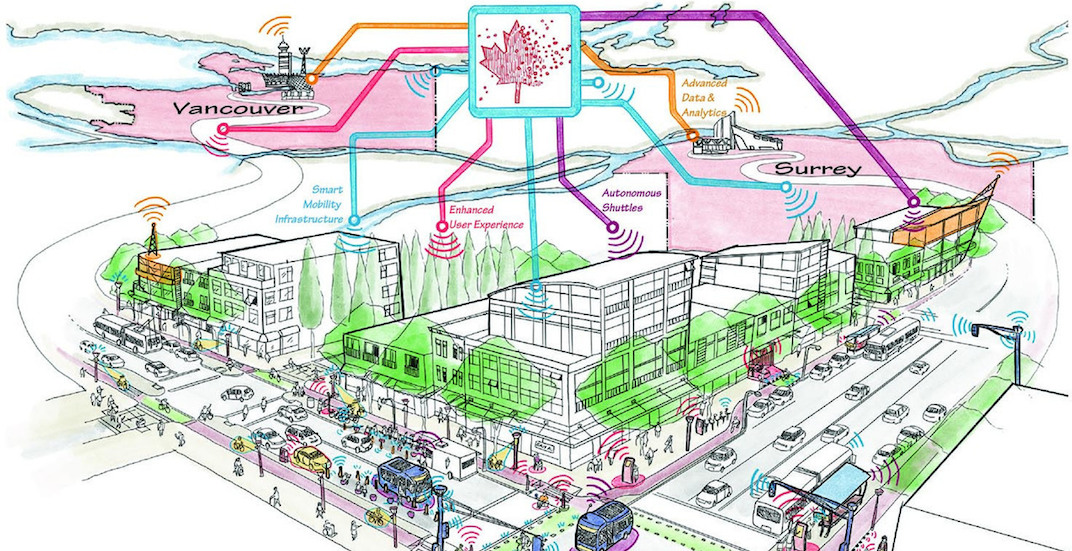 The two largest municipalities in Metro Vancouver have been chosen as finalists for a federal government competition to receive funding to build innovative city-building projects.

The City of Vancouver and City of Surrey were shortlisted today for their joint proposal submission to the Infrastructure Canada Smart Cities Challenge, which will award a single top prize of $50 million to the winning innovative proposal.

Both cities will share their winnings to construct a corridor for autonomous vehicles in each of their jurisdictions.

The Vancouver corridor will be a two-km-long route along the south shore of False Creek from Granville Island to Science World, providing connections to Olympic Village Station and Main Street-Science World Station. This project will utilize the right-of-way established by the former Olympic Line streetcar.

In Surrey, the corridor is envisioned for a 3.4-km-long route connecting Surrey Memorial Hospital and King George Station.

The exact details of the two-city project are still somewhat vague at this time, but proponents in both municipal governments have revealed they envision driverless shuttles that will eliminate human error to reduce the number of collisions.

The process to create detailed designs will begin now that the bid has been shortlisted for further consideration.

Other cities that were shortlisted for the top $50 million category prize include Edmonton, Montreal, Quebec City, and Waterloo.

Richmond was named one of the finalists of the $10 million category for its proposal to create “resilient physical and virtual platforms that are integrated seamlessly across all levels of government to enhance quality of life in day-to-day activities and minimize community impacts from major disasters.”

Neighbouring Victoria’s idea of creating a “multimodal transportation network that is convenient, green, and affordable” also earned it a shortlist placement for the same $10 million category.

The deadline for the submission of the final detailed proposals is winter 2018, and a jury will select the winners by spring 2019.