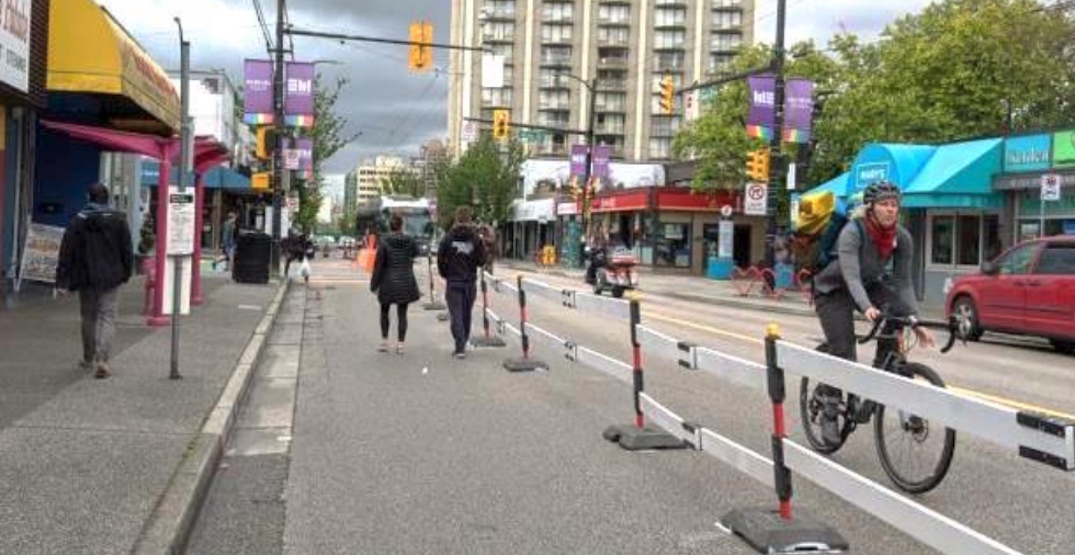 Up to 50 km of streets within the City of Vancouver’s jurisdiction could see some temporary changes over the coming weeks and months to provide more space for pedestrians and cyclists to roam around, and to help support businesses.

City staff presented a plan to city council on Wednesday that called for “slow streets” on existing greenways and local streets, where light interventions will be made to reduce and slow down traffic and create more comfortable opportunities for exercise while improving physical distancing.

Other target areas include expanding open spaces using streets next to parks.

The first stage of this work will be performed between now and July using construction-style barriers and local-traffic only signs.

Further work over the second stage from July to September will monitor outcomes and public feedback on the changes to date, along with the installation of tactical traffic calming at key locations.

The third and final stage beyond September through 2021 will gather data and feedback on how walking, cycling, and rolling has changed on these altered streets. This work will inform a review on the possibility of fast-tracking future new greenways, public spaces, and neighbourhood traffic calming projects.

Within busier areas where there is a concentration of jobs, such as within downtown Vancouver and the Central Broadway Corridor, the city will work to temporarily widen sidewalk areas and improve cycling connections. However, these measures are not planned for the areas like Hastings Street in the Downtown Eastside to discourage any further loitering and unwanted behaviour that may be unsafe.

On side streets next to retail districts, temporary plazas with street furniture on roadways are envisioned.

A motion unanimously approved by city council later in the day that called for an expedited flexible patio permitting process for restaurants complements the “slow streets” strategy. 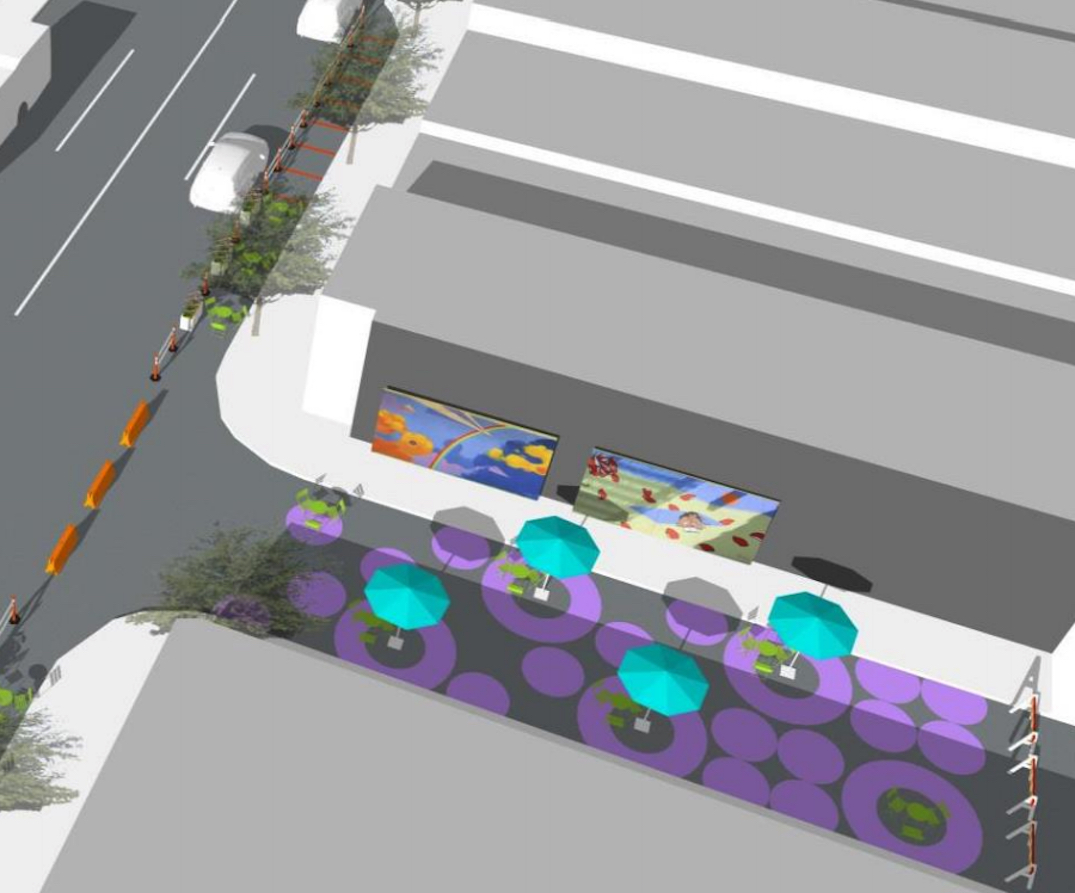 Artistic rendering of a temporarily widened sidewalk on a curbside lane, and a temporary plaza on a side street. (City of Vancouver)

City staff say they are already considering the requests being made by residents and businesses in certain neighbourhoods and districts.

These measures on commercial streets, which tend to be busier arterial streets, will be provided with greater review, given that a wider range of considerations need to be made, such as the impact to businesses and ensuring the public transit bus system remains accessible and efficient.

“It’s great for us to hear what the requests are coming from neighbourhoods,” said Paul Storer, the city’s manager of transportation design.

“We’ve been hearing some things and taking those in to account, but also listening to those who are trying to get around the city, especially where there are more vulnerable populations. We’re trying to look at it from a number of lenses.”

City staff cited examples of what other cities elsewhere in the world have done. Oakland carried out a “slow streets” program on 119 km of streets, Portland implemented “slow/safe streets” at 160 locations, Toronto implemented roadway changes to over 50 km of streets, and Seattle opened over 30 km of streets for multi-modal uses.

Vancouver has already closed Stanley Park’s local roadways to vehicles, and shut down a two-km-long eastbound lane of Beach Avenue between the park and Hornby Street. These changes, at a cost of $30,000 for installation and $20,000 per month for maintenance, have created more space for pedestrians and cyclists.

The upcoming measures will add to the series of early steps the municipal government undertook to assist businesses by closing curbside lanes to provide additional queuing space into stores. This added space provides physical distancing for customers in line, while also maintaining the sidewalk open to pedestrians. 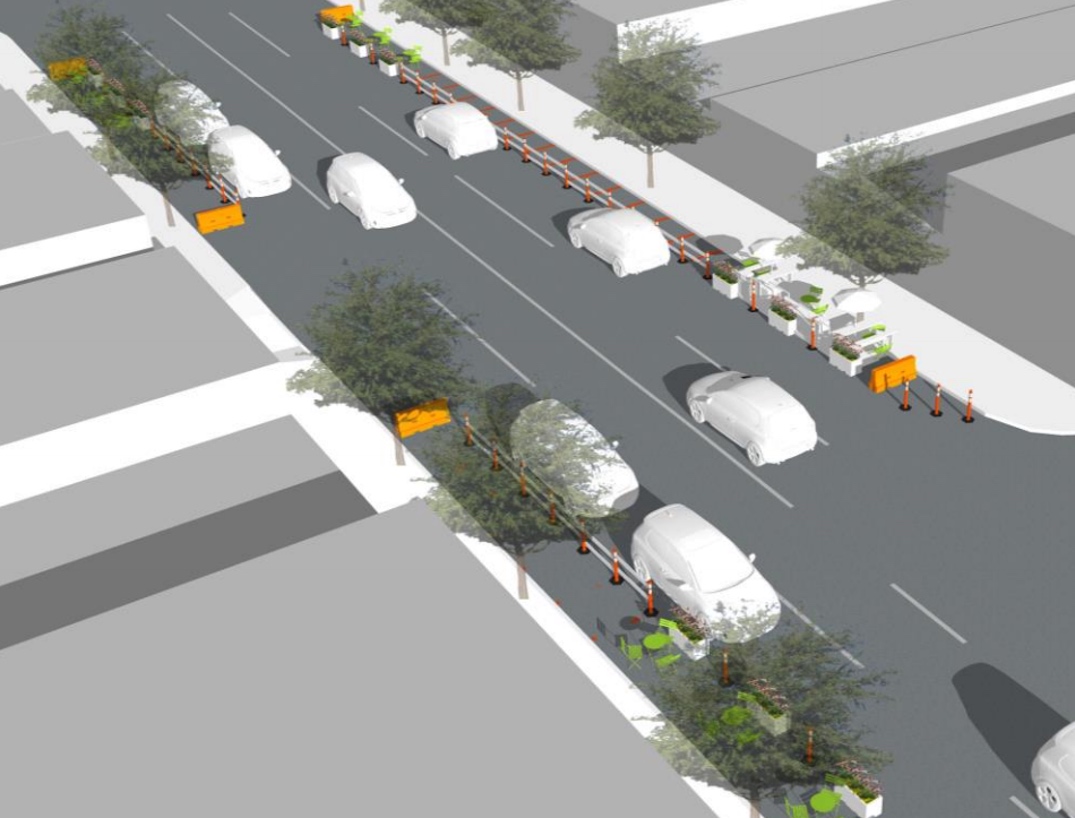 Artistic rendering of a concept for widened sidewalk to support businesses. (City of Vancouver)

To date, curbside queues have been installed at 10 locations, and over 50 locations are on the list for installation. Up to an additional 30 locations are planned, with each location costing $5,000 to install and between $3,000 and $5,000 per month to maintain.

Additionally, the city has implemented 14 short-term loading areas outside or near stores with high turnover to minimize physical contact. This also benefits individuals with mobility challenges, so they do not have to travel far to reach these stores.

City council was supportive of the city’s “slow streets” strategy, but city councillor Colleen Hardwick expressed some concern over the open-ended duration of the implementation.

“I’ve heard the expression that people are very enthusiastic about these changes, and I think that’s true over the short term. But I’m just cautious in the long term that we keep an eye on this,” she said.

“It may be that physical distancing has to be respected for a longer period of time because we need to find a vaccine, but I would think that as we look at each of these solutions, whether it’s the queuing or closure of the streets, we should be prepared to let the public know for how long this is expected to last.” 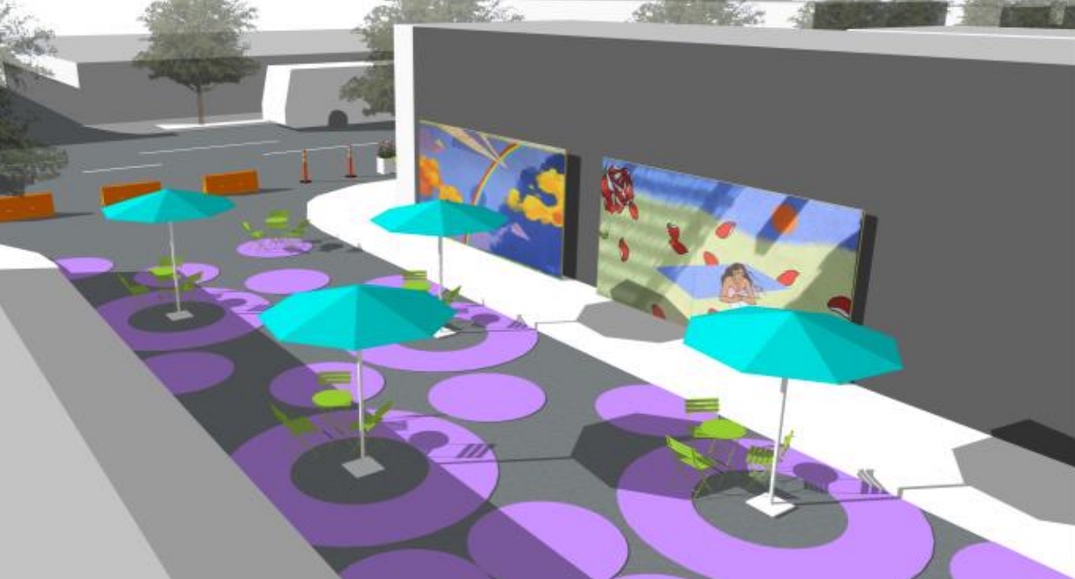 Artistic rendering of a temporary plaza on a side street. (City of Vancouver)