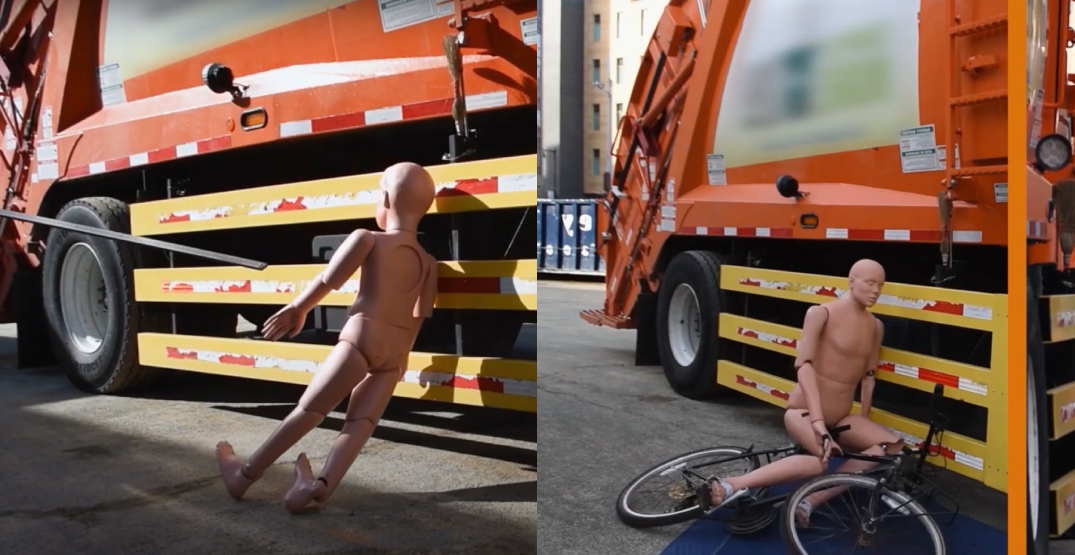 Example of a truck side guard barrier working for pedestrians and cyclists. (US Department of Transportation)

Two city councillors are calling on the City of Vancouver to initiate regulations that better protect other users of the road from large trucks.

This follows a high-profile fatality in late June, when a cyclist was killed in a collision with a semi-truck in downtown Vancouver, with the cyclist proceeding straight through the intersection but the truck turning right.

ABC City Councillor Rebecca Bligh and OneCity City Councillor Christine Boyle suggest the tragedy could have been prevented if the underside of the truck had “side guards.”

These horizontal barriers prevent pedestrians, cyclists, and small vehicles from being pinned under semi-trucks and their hauled cargo trailer, and trapped between the giant wheels.

Their member motion for Vancouver City Council’s consideration this week calls on City staff to install side guards on all municipal government and City-contracted trucks as a safety measure. As well, City staff should consider adding more side mirrors on these vehicles to give the driver a better view of cyclists and pedestrians around their vehicles. 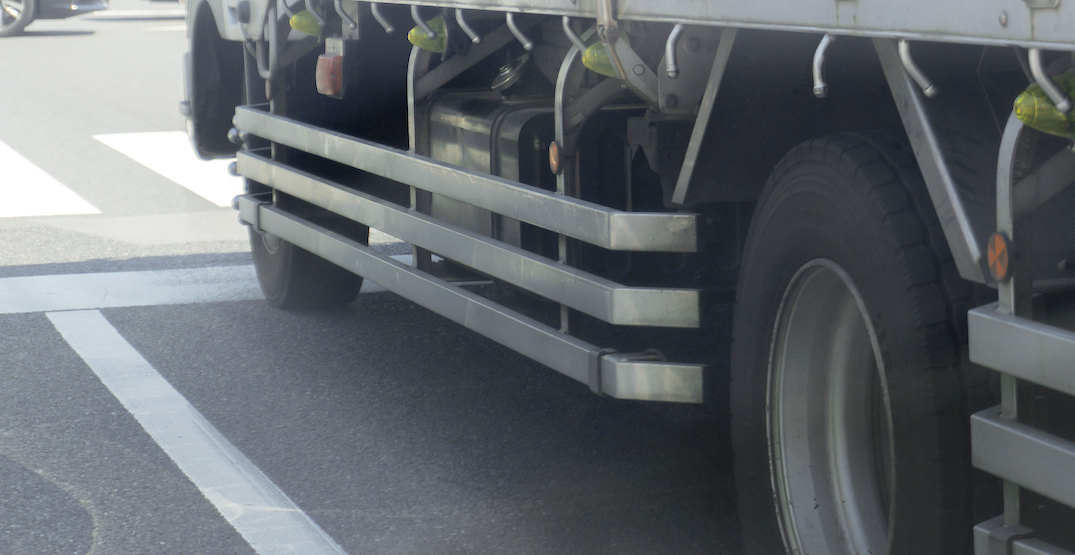 Example of side guard barriers on a large commercial truck. (Shutterstock)

The motion’s directions come short of making this a regulation for all trucks within the City of Vancouver as this falls under the federal jurisdiction of Transport Canada.

To that end, the motion calls on Mayor Kennedy Stewart to write to Transport Canada to urge the federal government to make side guards mandatory on large, heavy, and semi-trucks in urban areas.

Another letter from the mayor would also be sent to the BC Ministry of Transportation and Infrastructure to amend the Motor Vehicle Act to require mirros covering the front and side blind spots on such vehicles in urban areas.

Bligh and Boyle cite statistics from the Canadian National Collision database that suggest 22% of fatalities involving trucks and pedestrians or cyclists involve side impacts. As well, in the United Kingdom, cyclist and pedestrian fatalities fell by 61% and 20%, respectively, when side guards, front projection mirrors, and side close proximity mirrors were made mandatory.

The motion also notes that side guards are mandatory in European Union nations, Japan, China, Brazil, and a number of local jurisdictions in the United States.

City Council is expected to approve the motion.