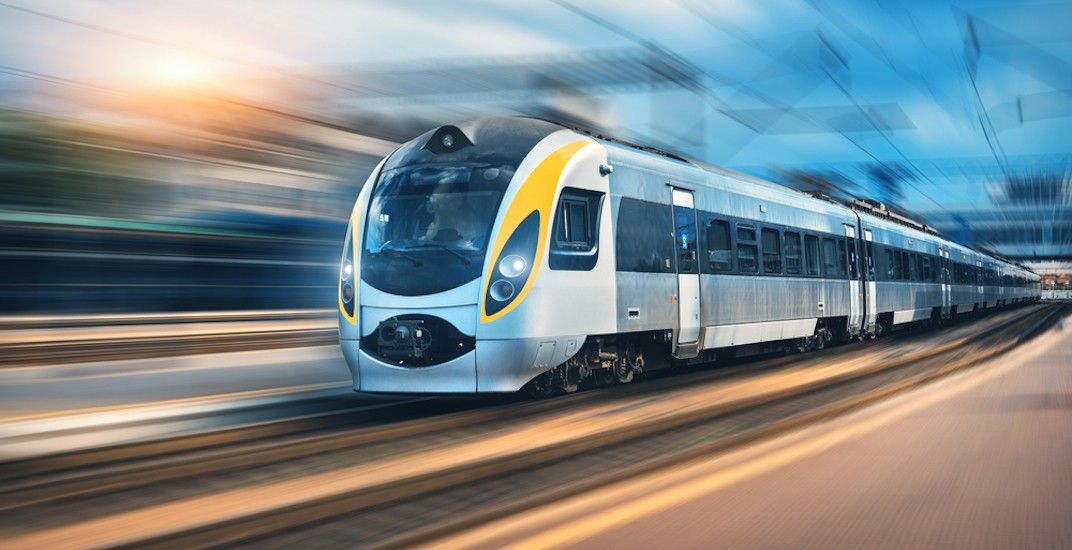 The findings of the latest, most in-depth analysis on an ultra high-speed rail line connecting Vancouver, Seattle, and Portland have been released, and it has determined that such a transportation system is needed to bring out the true economic potential of the Cascadia megaregion.

The provincial government and both state governments, with additional support from Microsoft, collaborated on the 400-page business case for the project.

Travel times between each city segment — Vancouver to Seattle, and Seattle to Portland — would be under an hour by using conventional high-speed rail technology reaching speeds of up to 350 km/h. While previous studies noted the possible use of maglev, that was not seriously contemplated in the study, as it is still considered “an experimental technology” with very few actual applications in use around the world.

Depending on the route and service scenario, between 1.7 million and three million annual trips would be generated by 2040. It would take over the entire intra-regional air travel market between the three cities, capturing between 12% and 20% of total intercity trips.

Such a service is expected to generate between USD $156 million and $250 million in fare revenues annually by 2040, with this level of revenue making high-speed rail in the Cascadia megaregion corridor one of the highest performing intercity rail services on the continent.

By 2055, annual fare revenues of up to USD $300 million could potentially be sufficient to cover annual operating costs. 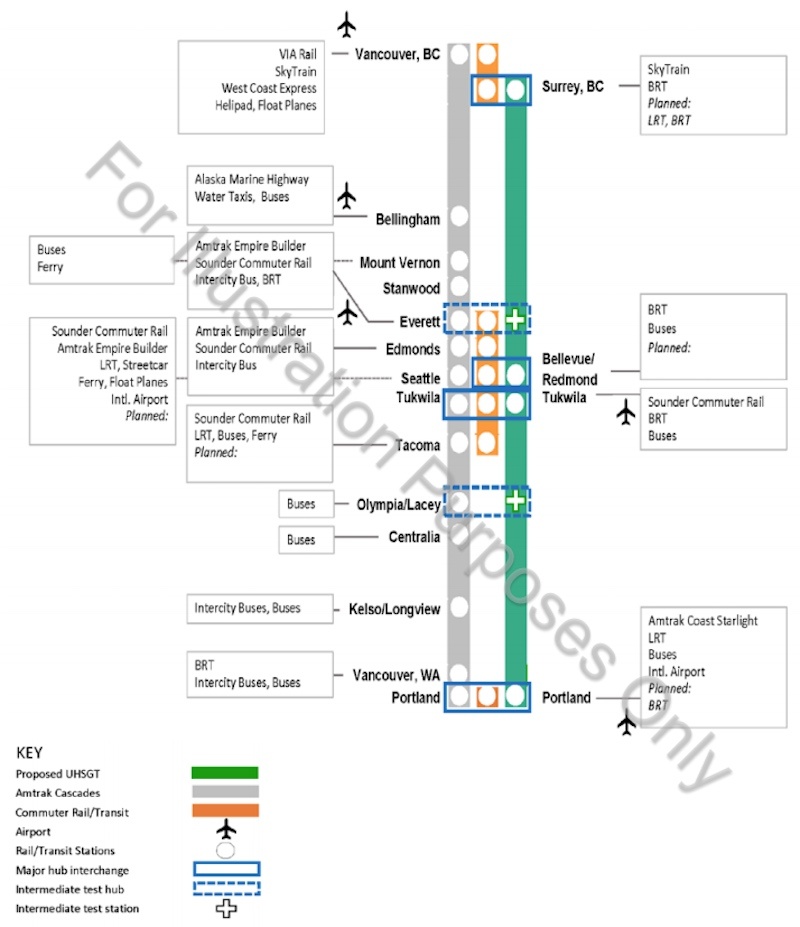 The capital cost of building the system would range from USD $24 billion to $42 billion. Comparatively, Washington State estimates that adding a freeway lane in each direction of US Interstate 5 through the state would cost about USD $108 billion in 2018 dollars.

“[The findings] provides even greater confidence that an ultra-high-speed ground transportation system in the Pacific Northwest is worth the investment,” said Washington State Governor Jay Inslee in the report’s preamble.

“My vision for the megaregion — stretching from Washington, north to British Columbia, and south to Oregon — includes a transportation system that is fast, frequent, reliable, and environmentally responsible. Such a system would unite us in our common goals related to economic development, shared resources, affordable housing, new jobs, tourism, multimodal connections, and increased collaboration.”

Moreover, the report says the performance of the high-speed rail line may exceed the levels established by previous studies, which have now been described as conservative.

For instance, one scenario runs through all three big cities of Vancouver, Seattle, and Portland with a single trunk line, which also features stations in Surrey, Bellingham, Olympia-Yelm, and Longview. Under this scenario, there could be nine express service trains that directly connect the three cities from 6 am to 8 pm, on top of a base that serves all station stops with 12 trains from 5 am to 11 pm.

For scenarios that include both a downtown Vancouver terminus station and a downtown Surrey station, travel times between both city centres would only be eight minutes.

Another alternative scenario includes stations for both downtown Vancouver and Vancouver International Airport.

As many as 30 roundtrips could be made per day every day of the year, depending on the scenario, using 260-seat trains.

It is anticipated 29% of passengers will use the Portland station, with Seattle being the second busiest station at 28%, followed by Vancouver at 11% and Surrey at 8%.

Within Metro Vancouver, ridership is divided roughly 60% to 40% between the downtown Vancouver station and downtown Seattle station, respectively.

“Surrey is forecast to be an attractive station choice for the large population in the southeastern part of the region, allowing them to avoid backtracking north into downtown Vancouver to travel south,” reads the report.

While some scenarios explored only a single Metro Vancouver station in downtown Surrey, it has been determined that a high-speed rail line that does not directly reach downtown Vancouver would have a major impact on potential ridership.

Economic benefits for the Cascadia megaregion

In 2018, Microsoft president Brad Smith provided this insight on the connectivity and global competitiveness of Cascadia as a result of high-speed rail: “Our ability to compete in the world’s economy will be enhanced dramatically by having a region that is six million inhabitants strong versus two or three regions of three million each. By combining the sub-regions, it is the only way for this megaregion to reach scale. None of the sub-regions can get to six million by itself.”

The business case dives further into this idea of economic integration.

By 2040, these three metropolitan areas of the Cascadia megaregion are expected to add a combined 3.5 million residents and at least two million jobs.

“The metropolitan areas of Seattle, WA, Portland, OR, and Vancouver, BC are among the top economic performers in North America. Their combined resources of labour and capital in an integrated megaregion economy would be comparable to global economic leaders,” reads the report. 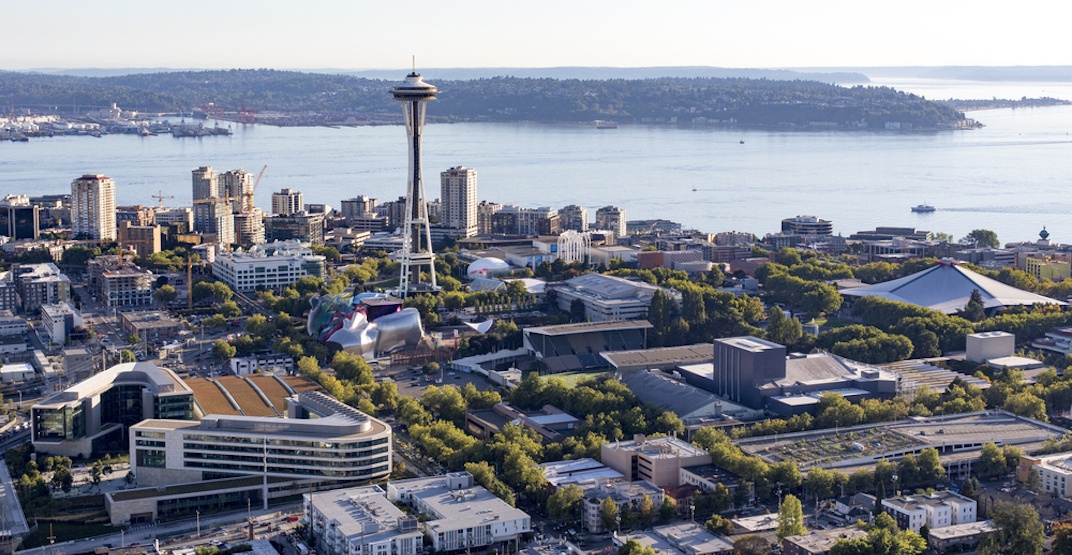 Seattle Centre, the site of the 1962 World’s Fair, with the Space Needle (centre) and Seattle Centre Arena (right). (Shutterstock)

Researchers also noted the economic impact of other high-speed rail corridors elsewhere in the world, including how Eurostar/High Speed 1 transformed connectivity between the United Kingdom, France, and Belgium.

The user benefits of this service through Western Europe are as much as USD $15 billion, compared to the initial USD $9 billion cost. Wider benefits entail a further $7 billion, such as land value increase near stations, where new development has been experienced.

“Key lessons from evidence elsewhere is that transforming connectivity, which is a key outcome from building high-speed rail, results in economic growth that can well exceed upfront costs,” the report continues, emphasizing that economic benefits determined in the previous 2017-2018 feasibility study are now highly conservative, as “combined with regional economic factors being stronger, indicates that the level of overall economic activity is anticipated to be even greater.”

For the purpose of the analysis, the business case assumed design, final engineering, and construction will occur from 2027 to 2034, with the service operating in 2035.

The next steps to realize high-speed rail centre around the creation of a cross-jurisdictional project office that involve the governments of British Columbia, Washington State, and Oregon. Washington State has already approved USD $224,000 towards the cost of this new authority, which is contingent on an additional USD $671,000 from other sources. Oregon has also committed $225,000, and BC has committed a further $300,000.