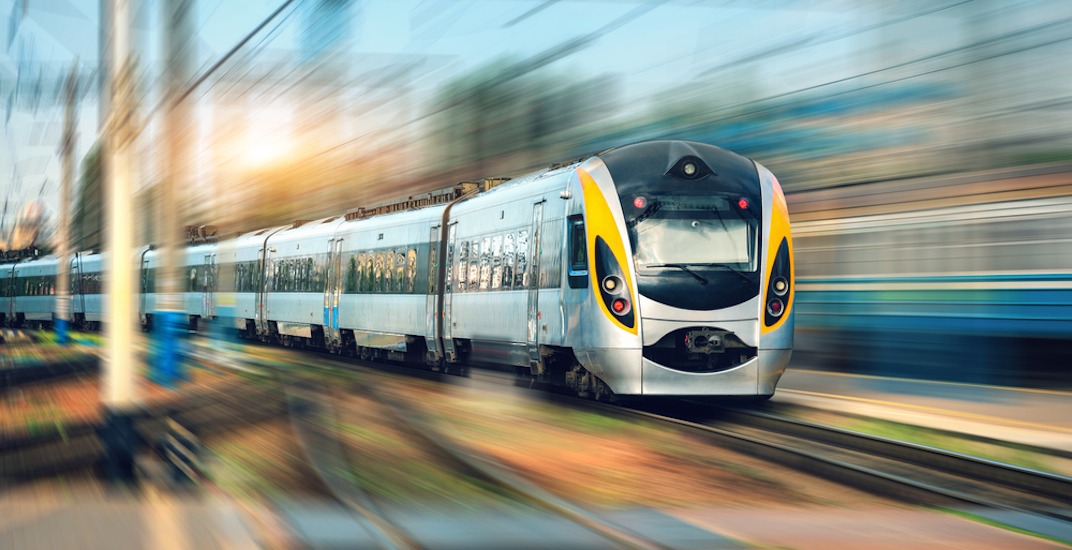 Washington State’s study examining the idea of an ultra-high-speed rail line connecting Vancouver, Seattle, and Portland estimates such a project would cost between US$24 billion and US$42 billion, with the potential to attract up to 2.1 million annual riders by 2035, growing to up to 3.3 million per year by 2055.

The findings of the five-month study commissioned by the State’s Department of Transportation, conducted by engineering consultancy firm CH2M, were released on Friday. The State covered $300,000 of the study’s cost while another $50,000 came from Microsoft.

“It’s a big idea to be sure, but many would say it’s an idea whose time has come and there are many compelling reasons for this,” said Charles Knutson, executive policy advisor to Washington State Governor Jay Inslee, during a joint transportation committee meeting.

He noted that the project already has high-level support from BC Premier John Horgan, Prime Minister Justin Trudeau, local governments, major tech companies, and other business, labour, and environmental groups.

The study on high-speed rail stems from the Cascadia Innovation Corridor agreement signed in 2016 between the government officials of BC and Washington State. The agreement commits both jurisdictions to growing the the Vancouver-Seattle corridor into a tech corridor and innovation hub, and this includes improving transportation links.

Knutson says the feasibility study “shows that we have the critical mass of population that is growing, the muscle mass of a strong economy, and the traffic problems to justify a system like this. There is a hunger out there for options and there will be economic benefits associated with this project.”

“We’re in the hunt. We have some very promising ridership and revenue numbers. Within a few years of operation, with fast and frequent trains, we could see ridership of [at least] 1.8 million and with the right technology that could pay for its own maintenance and operations.”

He indicated some of the construction costs could go down after a refinement of the project.

Route could start near downtown Vancouver

The study identified and examined the use of high-speed rail, maglev, and hyperloop.

High-speed rail uses trains with conventional steel wheels that operate at speeds of up to 350 km/hr.

Magnetic levitation, also known as maglev, depends on the creation of magnetic fields for the guidance and propulsion of trains, with no physical contact between the train and the track. It travels at speeds of up to 430 km/hr.

Only high-speed rail and maglev were seriously considered in the study, as hyperloop – magnetic propulsion carrying small trains in pressurized tubes – is not a proven technology and is still many years away from being a viable option for any type of commercial service.

As for routes, the study examined five route options such a transborder train service could take, with routes varying between 435 km and 475 km in length:

Corridors 1, 1A, and 2 have the highest cost as the routes go through highly urbanized areas, but these corridors also have the highest ridership potential of about two million per year by 2035. Pacific Central Station is the existing railway hub on the eastern edge of downtown Vancouver in the False Creek Flats while a route that starts at Vancouver International Airport could begin at Sea Island or near Bridgeport Station.

The fourth corridor option starting at the existing SkyTrain terminus station in Surrey would have the lowest construction cost and the lowest ridership potential, partially because it also has the least number of stations along the route and avoids highly urbanized areas.

It is anticipated a significant portion of the route would have to be tunnelled, particularly in areas that are highly urbanized or geologically challenging, as ultra-high-speed trains require a wide turning radius.

Up to 17% of corridor trips to shift to rail

The high-speed train service could cut down the travel time from Vancouver to Seattle to just one hour, and between 13% and 17% of all trips along the full corridor from Vancouver to Portland could be made on the train upon completion in 2035.

The study states that about 50% of the ridership will come from the Portland-Seattle portion of the route while Vancouver-Seattle will make up 25% of the total, with the remaining station pairs making up for the final 25% of ridership.

Currently, travel between Vancouver and Seattle takes 55 mins by air, 4 hrs and 30 mins by Amtrak, 2 hrs and 41 mins by car, and 4 hrs and 8 mins by bus. Travel times between Seattle and Portland are roughly the same for air and about three hours for the other modes.

Future phases of the Vancouver-Seattle-Portland high-speed rail project could extend the rail line east to Spokane and south to Sacramento, which would provide a connection with California’s high-speed rail system.

In January, the findings of a study funded by Microsoft will look into the economic case for high-speed rail. Other future studies will delve into the business case, funding and financing, and short-term improvements to existing railway corridors in the Pacific Northwest.