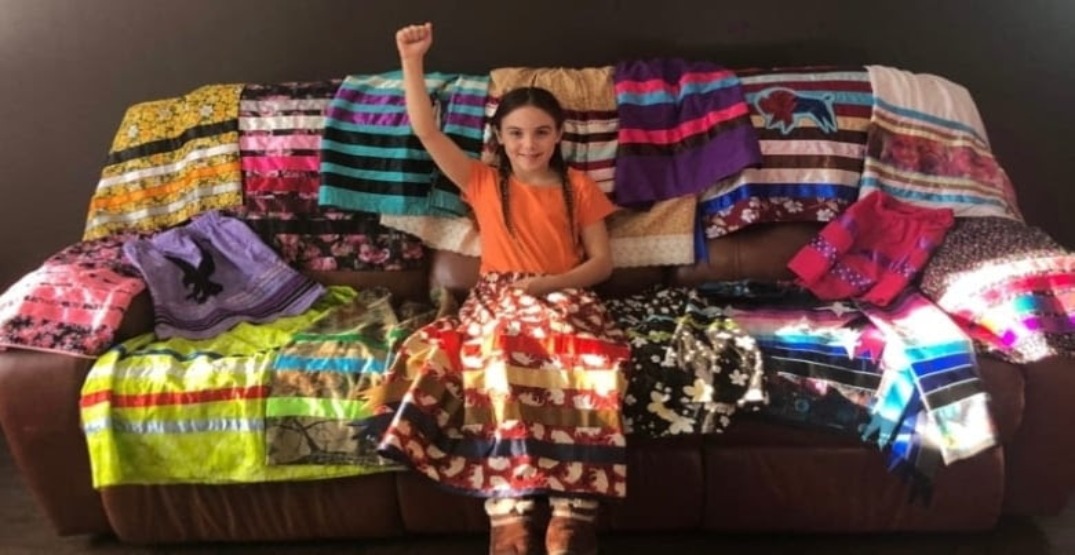 A rally is taking place in support of Indigenous students like Bella Kulak, who have been shamed for wearing traditional regalia to school/Gerri Leigh Kulak

On Wednesday, community members will rally together at Vancouver’s Grandview Park in support of Indigenous students across Canada who have been reprimanded or teased for wearing traditional regalia to school.

The event — titled Rock Your Ribbon Skirt — was inspired after Bella Kulak, a fifth-grade Indigenous student from Kamsack, Saskatchewan — was shamed by an educational assistant for wearing a traditional ribbon skirt during her school’s Formal Day. She was told the outfit was “informal and didn’t match,” states a release for the event.

Ribbon skirts and shirts are a popular clothing choice for ceremonial and cultural events. Organizers of Rock Your Ribbon Skirt say that they represent “a show of Indigenous pride and as a show of support for Missing and Murdered Indigenous Women, Men and rainbow colours for the LGBTQ community.”

This isn’t the first time that Indigenous students have been humiliated at school for wearing Indigenous traditional regalia.

“The issue of teachers, bosses, teachers’ aids, principles, who tried to anonymously shame us or bring us down is not new. But for many of us, this was the last straw,” Kat Norris, Coast Salish, a community activist with the Indigenous Action Movement, told Daily Hive in an interview.

“The purpose of ‘Rock Your Ribbon Skirt’ is simply to show that we as Indigenous people, who have been marginalized and have experienced genocide at the hands of a colonial government for the past hundreds of years, are proving that we can take a stand for ourselves to use our voices.”

She feels that Indigenous communities can no longer “babysit and try to educate. It is time we take care to learn, as Indigenous First People, what our human rights are.”

She adds that young students like Kulak, owning their narrative and taking a stand, “is the impetus for many of us to continue to exact change to support our young people.”

Vancouver’s Rock Your Ribbon Skirt Rally will take place from 12 to 12:45 pm at Grandview Park. The rally will include ceremonial drumming, speakers, and a call for an annual Ribbon Skirt and Shirt Day.