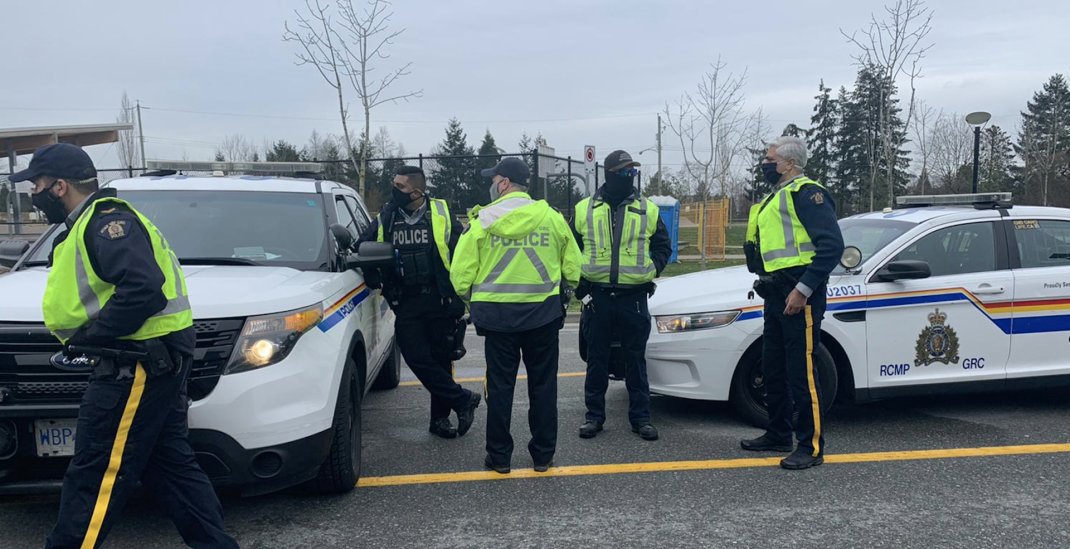 A lawyer with the BC Civil Liberties Association says the shutdown of a Surrey drive-in demonstration in support of farmers in India by Surrey RCMP goes against the constitutional right to protest.

The in-car protest, deemed “Surrey Challo,” was planned at the Cloverdale Recreation Centre for the afternoon of Saturday, January 17, but entrances to the site were blocked by police, preventing the event from taking place.

“The shutting down of this protest organized by a racialized community is an affront to the constitutional right to protest. Freedom of expression and freedom of association are fundamental democratic rights that must be respected,” stated Meghan McDermott, a policy director and staff lawyer with the BC Civil Liberties Association in a release sent from Our Avaaz, the organizers of the protest.

“This was an event that took safety measures and provincial health orders seriously but was arbitrarily and unjustly shut down by the Surrey RCMP even before any opportunity for alleging non-compliance arose.”

"This was an overbroad enforcement measure and the ticket should be withdrawn," states BCCLA Staff Counsel Meghan McDermotthttps://t.co/Fnoj2qtstG

The demonstration was described as a “cultural awakening and lively protest” in order to continue to draw attention to and support the plight of farmers in India who have been protesting against government farm laws for weeks in the country’s capital of Delhi.

On its Instagram page, Our Avaaz noted that all participants “must remain in [their] vehicles and follow COVID guidelines.” The group arranged for a live broadcast of the protest to air over the radio, allowing participants to hear speakers and organizers.

Surrey RCMP had prior knowledge of the protest. On Friday, the department tweeted that it was “aware of a large public gathering planned” and that it would enforce public health orders.

Police are aware of a large public gathering planned tomorrow in #Cloverdale and will be working alongside @CityofSurrey Bylaws to ensure public safety and compliance with health orders. Public health orders are in place to protect our community, and will be enforced.

Our Avaaz said the Surrey RCMP prevented the protest from happening “even before it began and without verifying the safety plan and compliance with health orders.”

The group furthered that the protest was organized with a COVID-safety plan that would meet all the conditions of the provincial health order. Some of the safety procedures that were to be in place included limiting the total number of vehicles, having people remaining in vehicles, compliance with the physical distancing requirement if outside their vehicle, mandatory mask-wearing, and gathering of contact information.

In a statement, Our Avaaz said one protester ended up with a $2,300 ticket for hosting a “non-compliant event.”

Sgt. Elenore Sturko with Surrey RCMP confirmed the ticket, stating the individual was fined for “organizing a gathering in contrary to public health orders.”

Surrey RCMP concerned about the “potential” of congregating

Sturko told Daily Hive that “it is unfortunate” RCMP had to take enforcement action.

“We are not trying to stop people from doing a demonstration or expressing their support for any group or to silence any messaging,” said Sturko. “But we have a responsibility, and we’ve been given the task as law enforcement officers to make sure that we are looking for compliance with public health orders.”

Sturko said there were a few aspects of the protest that concerned police, including a DJ, food trucks, and portapotties being brought in. She added that this may have caused a “potential for people congregating and exiting their vehicles. If you have 500 or more cars, [there will be] people exiting to use washroom facilities.”

Sukhpreet Singh, a volunteer with the Surrey Chalo protest, told Daily Hive that there were no food trucks on site.

“None that we planned nor did we ever see one show up,” he said. “As for the DJ, they were there to facilitate sound for radio as a contingency.”

No requirement for protest groups to work with police beforehand: lawyer

Sturko also responded to another in-car rally that took place in Mission on Sunday for an anti-bullying cause, where hundreds participated.

When asked why some car rallies in other jurisdictions have been allowed to take place and Saturday’s farmers’ protest was not, Sturko clarified that there have been car rallies in Surrey in the past that have been successful.

“We have had other car rallies here. One of the largest kisaan [farmers] conveys started in Surrey and went down to the Indian Consulate in Vancouver,” said Sturko. “So it’s not the subject matter, it’s not that it was going to be cars. We’ve had that. Instead of comparing Surrey to Mission … just look at Surrey to Surrey. We have had many successfully carried-out demonstrations and protests here, and in all of these cases those individuals actually had contact with the RCMP.”

In the case of Saturday’s protest, Sturko said organizers did not want to work with police. “So it was difficult for us to work with them. It also contributed to some of the risk of not having the ability to work closely with anyone who was willing to take responsibility as a leader or an organizer of the event.”

McDermott, who spoke on behalf of Our Avaaz, told Daily Hive that there is no legal requirement for protest groups to work with authorities.

“When expressing themselves or when holding events, there is absolutely not a requirement in law that people will have to check-in with police first,” she said.

“I feel it is really disturbing, the idea that you don’t cooperate with police first then your right to expression is extinguished. That’s really, really troubling to me.”

She added that the very purpose of protests is often against public entities. “In this case, it’s about the Indian government, of course… An outcome like this can show how there might be trust eroding or there might not be any trust in the first place between certain communities and police.”