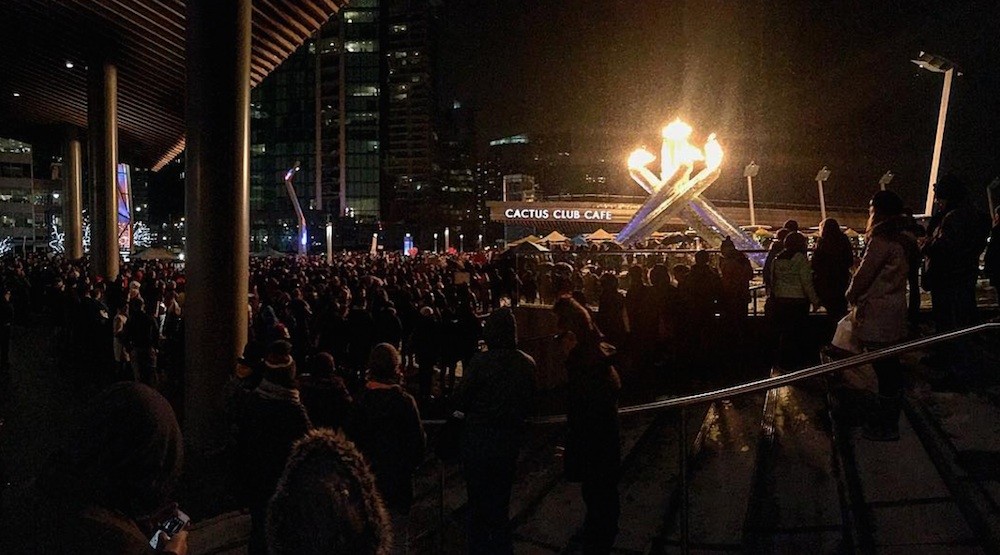 An estimated 2,000 people braved last night’s snowstorm and attended a candlelight vigil at Jack Poole Plaza in downtown Vancouver that included the relighting of the Olympic Cauldron.

Earlier Saturday evening, proceedings began with a vigil at the Al Masjid Al Jamia Vancouver mosque on West 8th Avenue near Heather Street before continuing at the Robson Street side of the Vancouver Art Gallery. From there, a small procession joined a growing crowd at Jack Poole Plaza where an anti-Islamaphobia rally dubbed “Love Over Fear” was held.

Community leaders delivered speeches at the Jack Poole Plaza event, and the Cauldron was relit as a symbol of unity and hope.

Many thousands more would likely have attended last night’s vigil had road conditions been optimal.

Standing together to fight Islamophobia. On a cold snowy night we were warmed by the Olympic torch that symbolizes international unity and hope. #stopislamophobia #westandtogether #standtogether #canada #vancouver #yvr

Backlit by the olympic torch at the anti #islamaphobia rally, a poster redirecting bias towards something better.

A light in the snow storm highlighting community compassion at Vancouver’s rally against islamiphobia last night 🔥🌎💪🏻A moving moment to remember with many more to come! #communityfirst #compassionin2017 #stopislamophobia #wearestrongertogether

Another pic from the Rally Against Islamophobia last night. It was so great to see such a huge turnout, despite the terrible weather!❤✊🏻 #strongertogether #loveoverfear #solidarity #protest #protestsigns #resist #vancouver #vancity #yvr

Surrounded by so much love tonight.. speechless #LoveOverFear

United in solidarity for our Muslim brother and sisters.

Vigil for those slain in the Quebec City mosque attack

Went to a rally against islamophobia today and it was awesome ✌🏻✌🏼✌🏽✌🏾✌🏿”if you build a wall, my generation will knock it down”

From the Love Over Fear: Rally Against Islamophobia in Vancouver on February 4th, 2017. We stand together in peace and love with our Muslim brothers and sisters. #loveoverfear