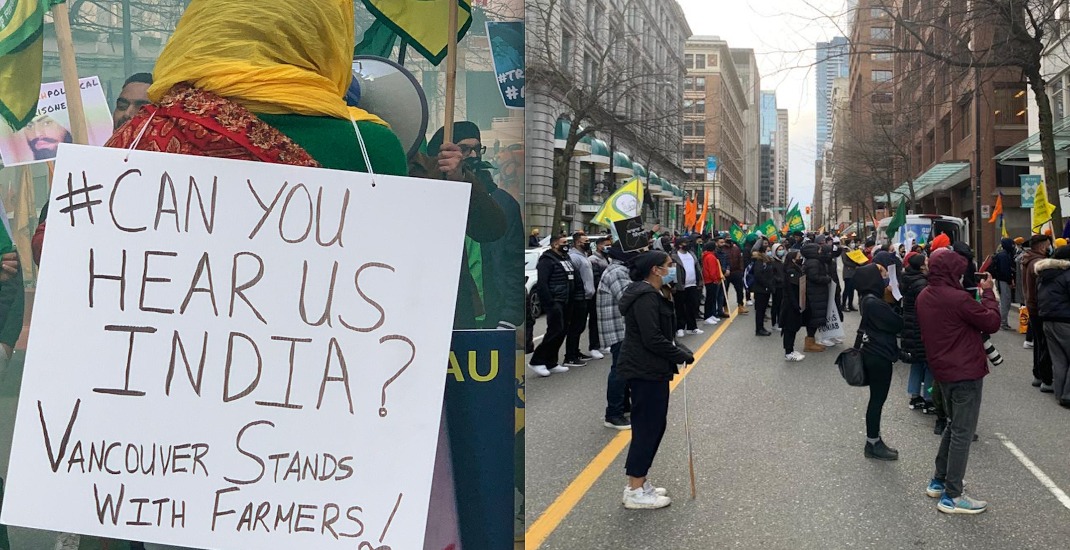 Protesters gathered outside the Indian consulate in downtown Vancouver Tuesday for what they called a “Global Day of Action” in support of farmers in India.

The local demonstrations came on the same day hundreds of thousands of farmers took to India’s capital of Delhi on January 26 — the country’s Republic Day — to continue their protests against three government farm laws that bring corporations into India’s controlled agricultural sector. 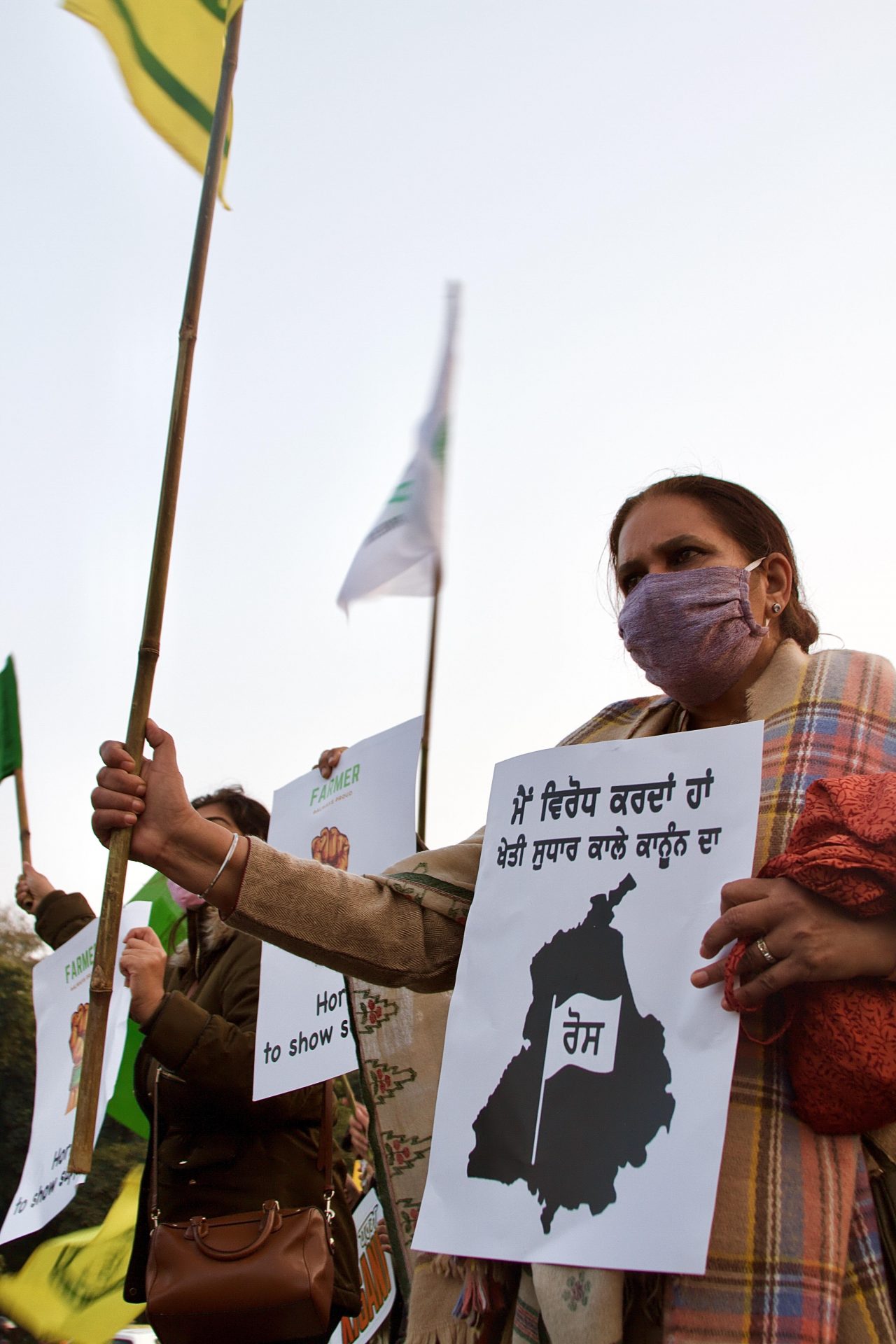 Protesters on the ground in Punjab/ Submitted by Simran Chhabra 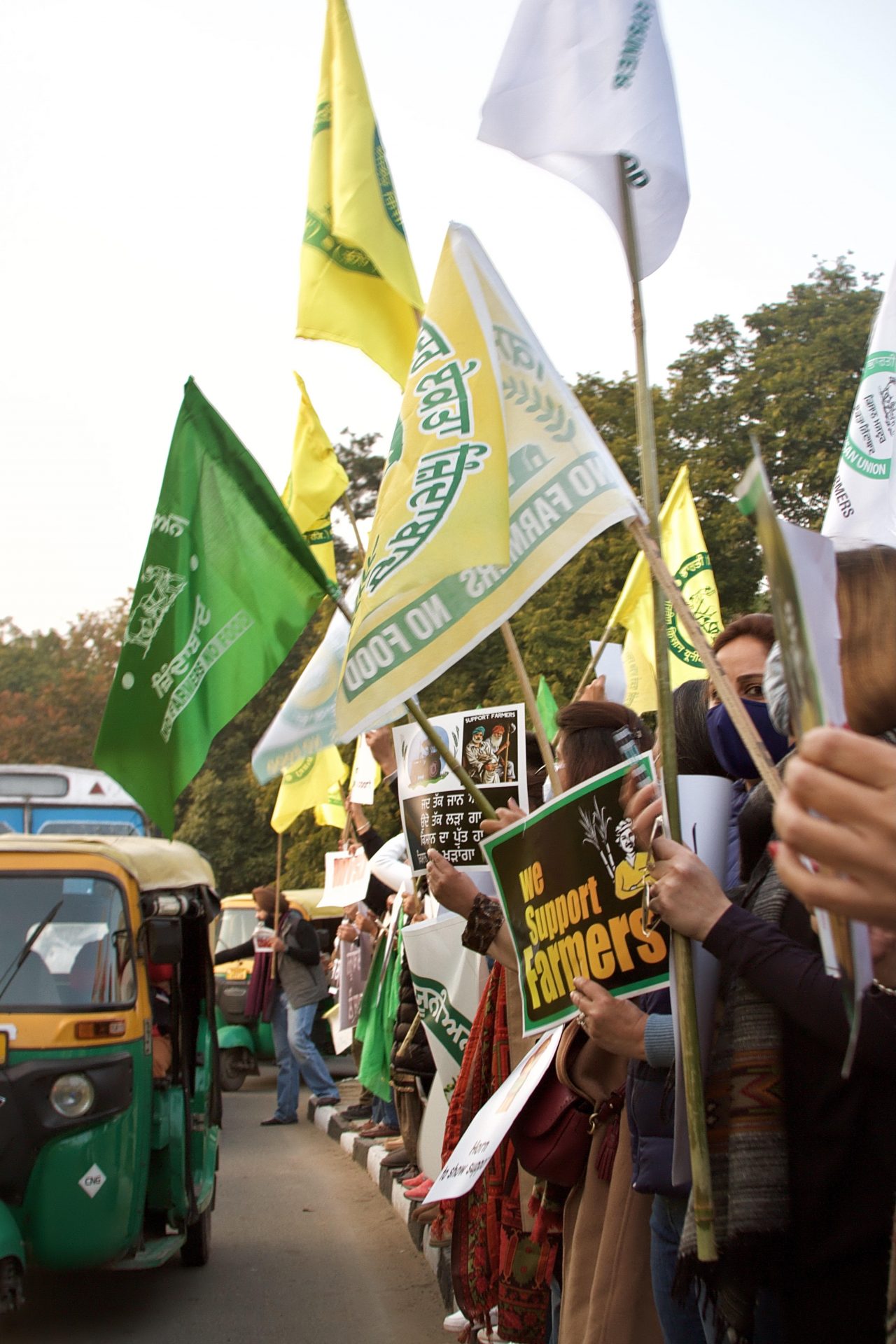 Protesters on the ground in Punjab/ Submitted by Simran Chhabra

The farmers — predominantly from the northern Punjab and Haryana states –are concerned they’ll be at the mercy of big business and have been protesting against the laws for months.

Thousands of farmers have set up camps on the outskirts of Delhi’s border since November, to take part in peaceful demonstrations calling on Prime Minister Narendra Modi and his government to repeal the laws.

Observations from the ground

During the Republic Day demonstrations, some groups of protesters clashed with police and entered the historic Lal Quila (Red Fort).

Amaan Bali, an independent journalist reporting on the ground in Delhi, shared his observations of the protests with Daily Hive.

Bali says he observed attacks on protesters started by police.

“Police instigated by deflating tires of tractors and taking out diesel from tractors. Farmers opposed the moves and situations escalated. The brute force was used by police, but again the number game and optics plays its role,” he stated.

“The violence was manifold. Police did put up barricades on the approved route as well. It seemed like they wanted the emotions to heat up and then lead that crowd to Red Fort,” he said, adding that police action near the protests included the use of rubber bullets, batons, and tear gas shells.

Despite the events that unfolded, Bali tells Daily Hive the mood of the farmers he has spoken to remains “Chardi Kala” — a Punjabi phrase used in Sikhism that loosely translates to a positive state of mind even through times of adversity.

Delhi Police has said that they have detained more than 200 people. I had reported 210 yesterday. The number is closer to 250+

People are trying to identify the missing people at Tikri by trolley to trolley survey. Most detained are from Singhu who managed to get to Fort.

Delhi police say 19 arrests were made following the protests on January 26. Police also say 300 officers were injured. At least one farmer has been reported dead.

For weeks, farmers predominantly hailing from India’s northern Punjab and Haryana states have been camped outside the borders of Delhi.

In a statement, Our Avaaz, a group that has been organizing local protests here in Metro Vancouver, noted that solidarity rallies for farmers have been taking place “in Canada, the United States, Australia, the UK, Germany and Denmark to bring attention to India’s history of oppressive actions as vulnerable farmers and their families continue to protest in Delhi.” 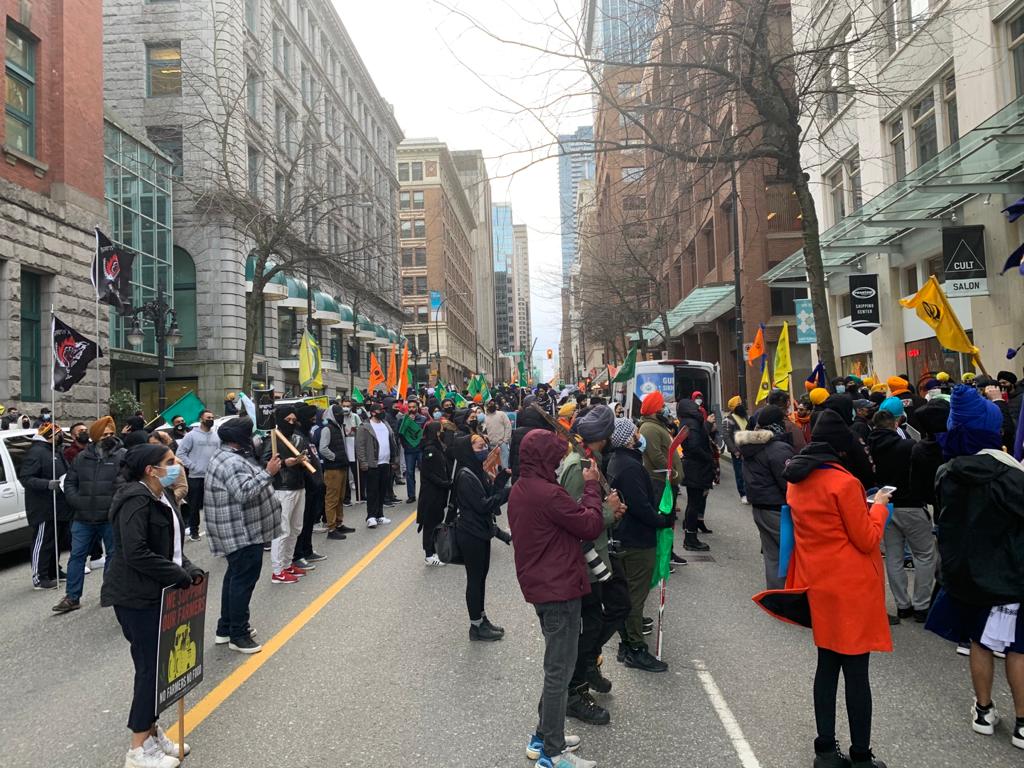 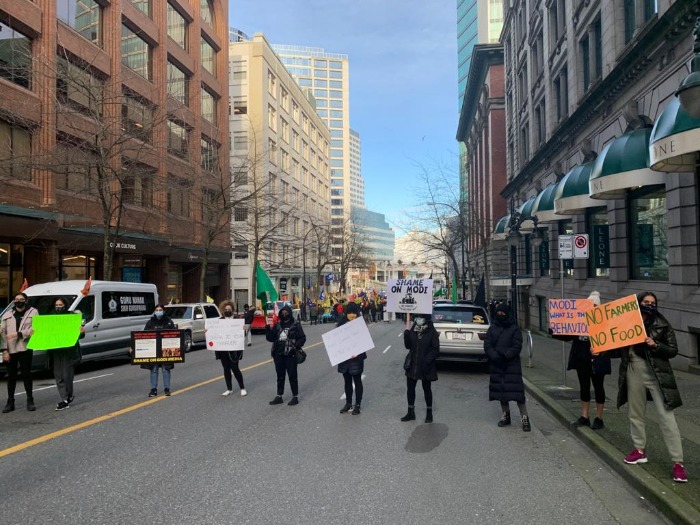 The focus of today’s protests was to mark a Global Day of Action, which would encourage “global citizens and the Indian diaspora to #AskIndiaWhy,” stated organizers.

“This hashtag will connect efforts by supporters around the world to keep India accountable for human rights abuses and to highlight that global attention is turned to the farmer protest in Delhi with the expectation of a peaceful resolution.” 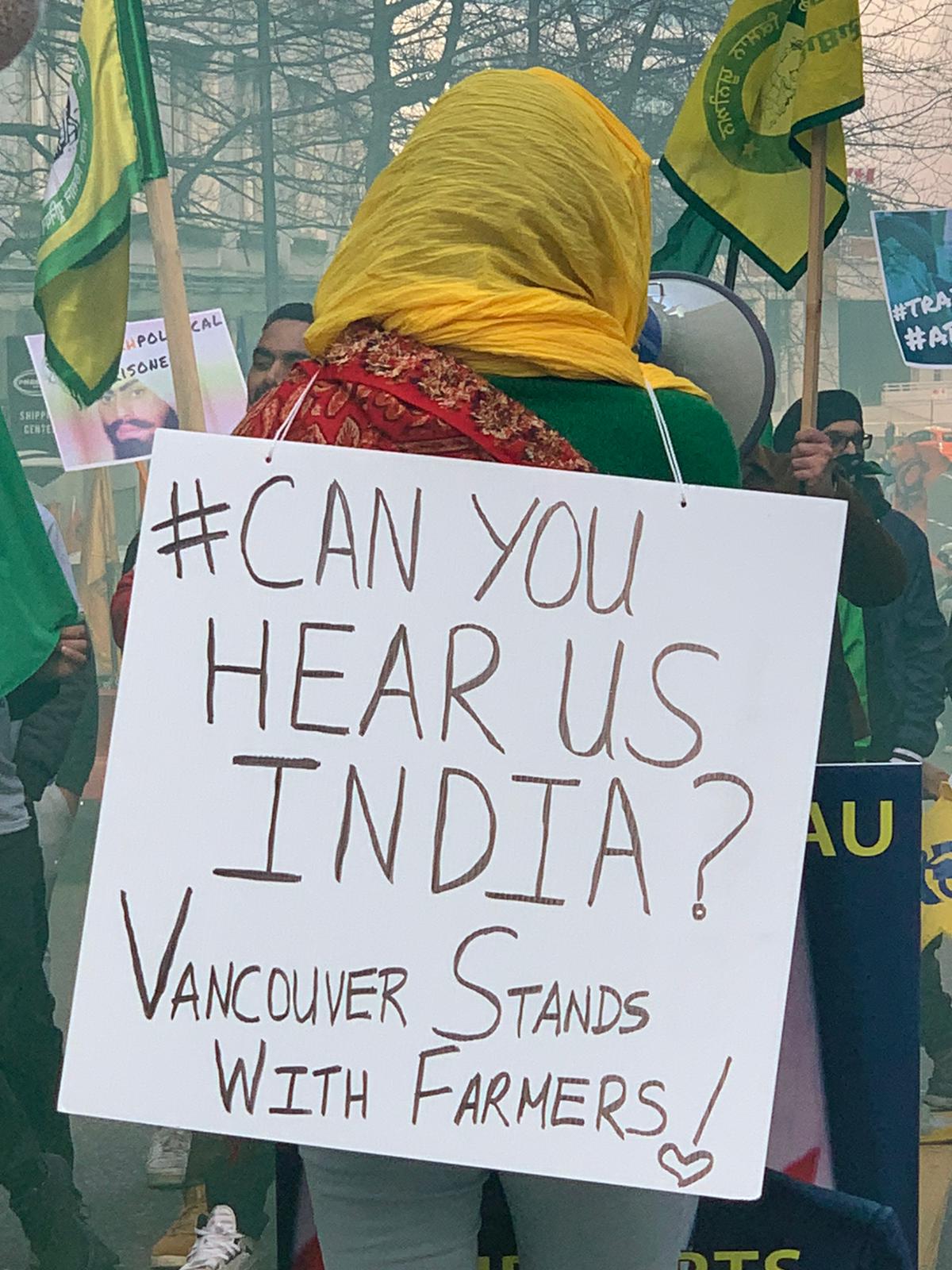 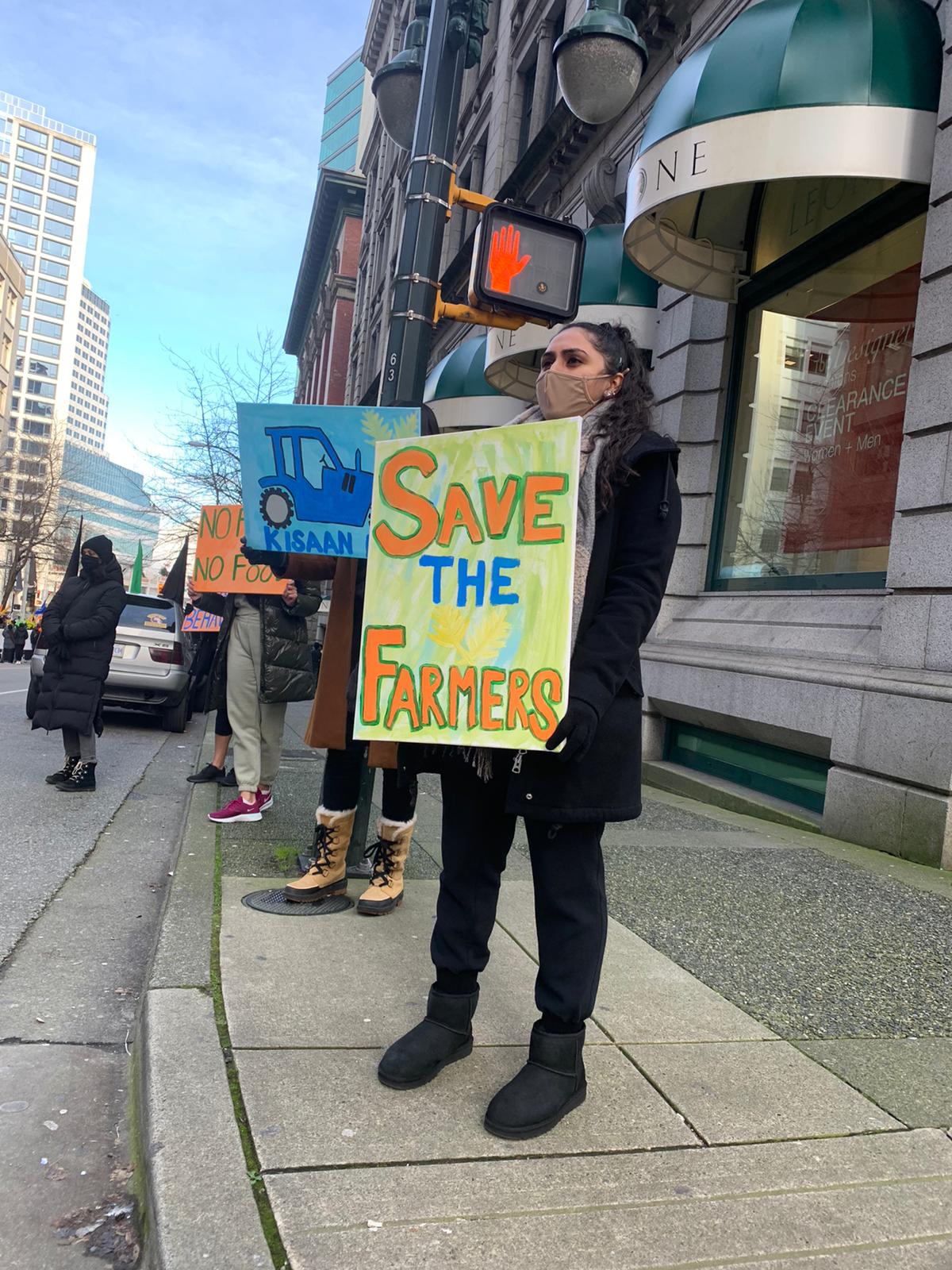 “These protests might feel like they are worlds away, but they are fighting for the same things we all value here at home – including the right to earn a living and feed our families” stated Mo Dhaliwal, of the Poetic Justice Foundation, in a press release.

“Farmers believe the agricultural reform laws introduced by the Indian government will drive down crop prices, devastate their earnings and allow private players to dictate food prices, driving small farmers even further into debt. Their concerns must be heard and their right to peacefully protest must be protected.”