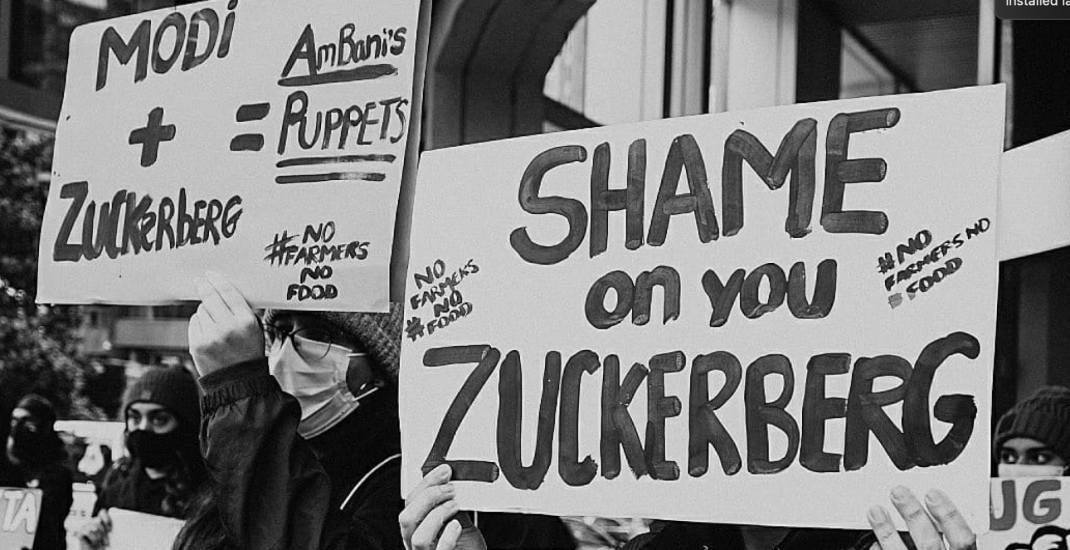 Demonstrators were protesting outside Vancouver’s Facebook office on Burrard Street this afternoon as part of an ongoing attempt to hold the social media giant accountable for what they say is the censoring of online posts that show support and raise awareness about the current farmers’ protests in India.

In a statement, local group Our Avaaz, which has been at the forefront of organizing solidarity protests for farmers in Metro Vancouver, says that “Facebook has been found yet again to be suppressing content from its platforms,” which also include Instagram.

this is a weird observation but whenever I story something for the farmers on instagram it gets 100-150 views but when I story other things in the same day I get around 500 views.. how is that possible..?

The group adds that the timing of the censoring is “grossly problematic” as there has been an increase in international media coverage of the movement, which has been led “by the marginalized Punjabi Sikh community.”

Censoring of posts is “a pattern”

Farmers in India are currently taking part in the largest organized protests in the world, against three farming laws passed by Prime Minister Narendra Modi’s government.

“I can’t stress enough that the reason the farmers’ protest has received as much attention as it has is because of social media and because of the diaspora,” Balpreet Singh, legal counsel with the World Sikh Organization told Daily Hive Vancouver.

“Those of us that are here in the west, we have our relatives who are on the ground protesting and we can amplify their voices and we can also draw attention to human rights abuses.”

He explains that individuals using hashtags such as #ISupportFarmers or #Sikh have been finding that their posts have been either removed from those platforms or censored.

Singh says this isn’t the first time that the hashtag #Sikh has been blocked on Instagram and Facebook.

“The thing that’s most frustrating though is this isn’t something that’s just happened over the past couple of weeks. It’s a pattern that we’ve seen repeat itself since at least June,” he said, adding the month is significant as it marks the invasion of Harmandir Sahib in Amritsar — the holiest place of worship for Sikhs — by the Indian government in 1984.

“It’s been that every time the Sikh community wants to commemorate something or wants to mark an even online that the Indian government finds uncomfortable or doesn’t want to be shared — it’s resulting in this sort of censorship,” said Singh.

In response, Instagram released a statement on June 3, apologizing for “mistakenly” censoring posts that included the hashtag #Sikh.

We have unblocked the hashtag #sikh on Instagram and are working to unblock #sikh on Facebook. We're investigating why this happened. We will follow up here later today with more information.

Following that incident, Singh says there was a large meeting called by Facebook with community stakeholders to address the issue, but Singh says “no further steps were outlined and no conclusions were shared with [the WSO].”

The WSO has made a series of recommendations to Facebook and other social media platforms regarding censorship of posts but Singh says “none of those recommendations have been accepted.”

Vancouver-based lawyer Rami Hayre, who has been regularly bringing attention to the protests on Instagram, told Daily Hive that she started to notice the censoring of some of her posts last week.

She also noted that one of her videos posted on Instagram regarding the specific laws impacting farmers had its audio muted. Comments on her posts are also being reported.

Hayre says she has since stopped using any hashtags regarding the protests on her posts to avoid further censoring of her content.

Surrey resident Prabh Dhillion spoke out about the issue on Instagram.

“I have been compelled to make this post after I have personally been experiencing serious forms of censorship on this platform. Users are not having my posts show up in their feed or are missing my stories, which many others speaking up are also experiencing,” he wrote in a widely-shared post.

On December 20, Facebook banned the page “Kisan Ekta Morcha,” which has been providing regular updates on the protests to over 183,000 followers.

The page has since been restored. In response, the Internet Freedom Foundation (IFF) released a statement saying the incident “requires a close look at [Facebook’s]  content moderation practices and policies.”

Short statement : The action taken by Facebook to close the Kisan Ekta Morcha requires a close look at its content moderation practices and polices. India has close to 300 million Facebook users. It’s largest market. Even then there is little transparency or accountability. 1/2

“As an immediate ask and at the very least Facebook is expected to issue a detailed statement on how and why was the page of Kisan Ekta Manch unpublished,” stated the IFF.

Advocates are also drawing attention to the larger relationship Facebook has with the richest person in Asia, who also happens to be Indian billionaire-businessman Mukesh Ambani.

He owns a conglomerate of companies, which fall under the umbrella of Reliance Industries. One of those companies is Jio Networks, India’s largest telecom network operator.

On December 15, Facebook CEO Mark Zuckerberg virtually met with Ambani to speak about Facebook’s relationship with India. In April, Facebook has also invested over $5 billion into Jio Networks.

Ambani, and another Indian billionaire Gautam Adani, are believed to have a beneficial stake in India’s farmers’ laws.

In a statement, Our Avaaz says that Ambani is a “vital proponent of the Farm Laws.”

“Synchronously and ceremoniously, on December 14, 2020, Facebook began to suppress Instagram and Facebook for users speaking up regarding their questionable business ties and the Farmer Movement,” stated Avaaz.

Earlier this week, demonstrators gathered outside of Facebook’s headquarters in Menlo Park, California, in response to the apparent censoring.

The protests in Vancouver today were part of Our Avaaz’s “5 Days for Panjab Kisaan” demonstrations, which organizers say are an opportunity to show support for farmers’ through selfless service to the community at large.

Volunteers also took part in several initiatives in Vancouver’s Downtown Eastside Sunday afternoon,  serving langar (free, vegetarian meals that are usually served in gurdwaras as part of the Sikh faith), and organizing a volunteer clean-up, and blanket drive, before making their way to Facebook’s offices.