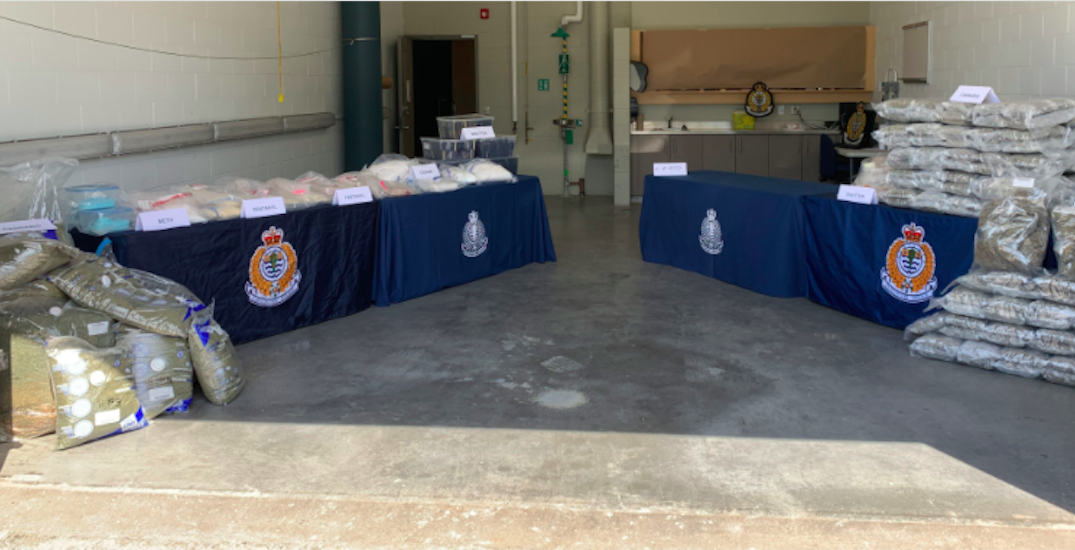 The drugs that were sized by VPD in the investigation. (VPD)

Vancouver police announced on Wednesday that they have seized nearly $3 million worth of street drugs and eight handguns after a four-month investigation.

“This was a collaborative effort involving officers from the Organized Crime Section, Emergency Response Team and Patrol Officers leading to this substantial seizure of drugs,” said VPD Insp Bill Spearn.

“We believe this will have a significant effect on the drug trade and will impact the health and safety of the local community,” said Spearn.

According to Spearn, the seizure comes after the VPD’s Organized Crime Section launched Project Transit in early 2020 to target offenders engaged in the distribution of illegal opioids.

The investigation culminated in the execution of five search warrants on April 29. Four warrants were executed in Vancouver and one in Richmond.

“I would consider this a significant seizure,” said Spearn during a press conference. “As you can see, a number of very dangerous firearms have been taken off the streets. This is also a significant amount of fentanyl.”

In fact, he added, “this is probably the most fentanyl I’ve seen in one spot in my 24 years of drug enforcement.”

And while police estimate the “bulk value” of the seizure to be almost $3 million, Spearn noted that “at the street level, this value would be significantly higher.”

At this point though, “it’s difficult to give a street value right now because we’re going to require the Health Canada analysis before we do that.”

Police arrested eight people when the warrants were executed. All suspects were later released without charges pending further investigation, although police do expect charges to be recommended in the coming months.

Spearn said a few of the suspects involved in the investigation are known to police, “but the rest are not.”

Asked if he could comment on whether the seizure was connected to any specific gang or crime group in the Lower Mainland, Spearn said that he can’t at this time as it is still under investigation, “but I can tell you that anybody who has access to this amount of illicit drug supply is going to be connected in one way or another.”