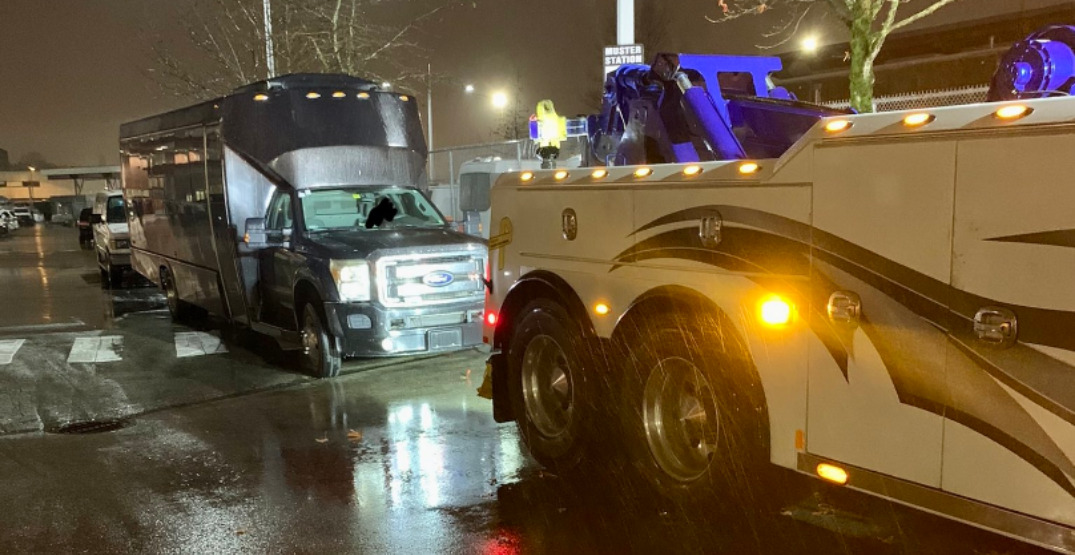 The Vancouver Police Department has recommended thousands of dollars in fines after a weekend blitz saw the force take a number of limos and buses off the road.

Officers with VPD’s traffic section examined eight vehicles in total — three were party buses, and five of them were limousines. Seven were deemed unsafe.

The blitz took place on Friday and Saturday night.

Among the discoveries that the VPD made over the weekend, a party bus equipped with its own dance floor was found with 27 teenagers inside. The bus was hired to take the group of teens downtown for a 17-year-old’s birthday party.

VPD is recommending 27 counts of failing to provide a chaperone for passengers under 19, allowing open liquor in a vehicle, as well as operating with too many passengers.

The seven vehicles were taken out of service after officers identified major safety concerns, including non-functioning emergency exits, open liquor bottles, seatbelts that were broken, and emergency breaks that were missing.

In one instance, officers discovered seats were being propped up by a two-inch piece of wood.

“We always encourage people to plan a ride home when they go out to celebrate, and we trust that people operating limos and party buses will do everything they can to keep people safe,” said VPD Sergeant Steve Addison in a statement.

“Sadly, many of the vehicles inspected were in appalling shape or were being driven in a dangerous way.”

According to Sergeant Mark Christensen, fines of up to $40,000 could be imposed, which would translate to $1,500 for each passenger.

Stopped one of these⬇️last night. Bus and driver licensed for 25 pass. but 28 on board, all under 19! No waivers, no chaperones! $311 fine for overloading. PTB could impose administrative fines of $40K..$1500 per pass! @VPDTrafficUnit @VancouverPD @ChiefPalmer pic.twitter.com/rzDgAvmK63

“Sadly, people who paid good money to have a safe night out were forced to find another way home,” added Addison.