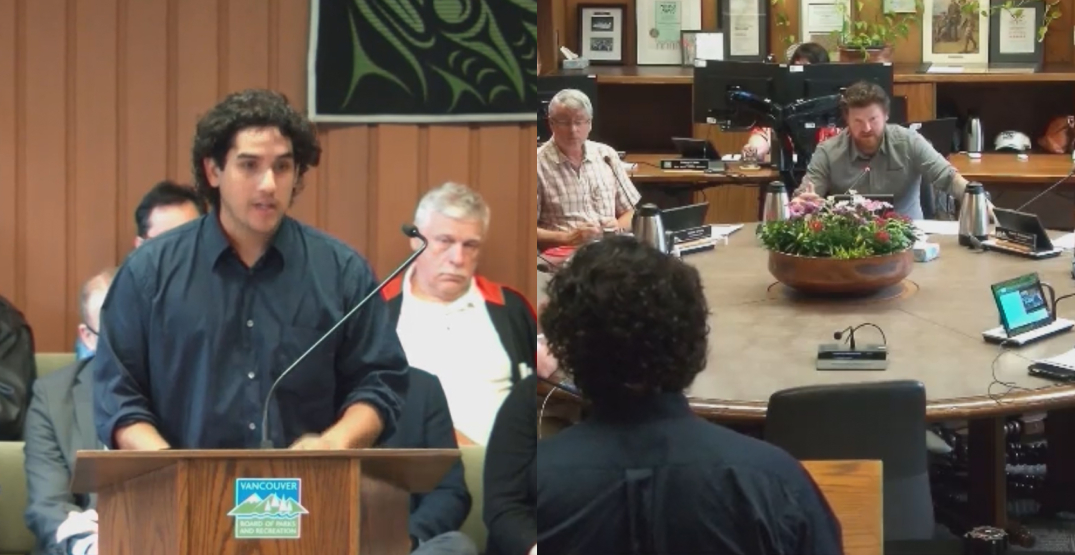 The Vancouver Park Board is under fire after a commissioner interrupted and cut off a Park Board employee for making a workplace harassment complaint in a public setting.

Jose Rafael was a public speaker during Monday evening’s public meeting on the Park Board’s new Code of Conduct Policy.

He described himself as a resident of the West End and a student, and he’s three months into his new role as a Park Board operations worker servicing Downtown Eastside parks.

“In the first three months, I’ve witnessed widespread fear of management. Within my first week, I’ve been subjected to racism in the workplace by supervisors, and I’ve witnessed repeated violations of the city’s current bullying and harassment policies,” attested Rafael, before being suddenly stopped in his tracks by Green Party commissioner Camil Dumont.

In his advisement to the worker, Dumont suggested this is the wrong platform to air his grievances, as this is a “human resources matter” and “your presence here may have repercussions for yourself.”

Rafael then proceeded to make some general concluding remarks on the Park Board’s approach to its Code of Conduct and ethics.

“I’ve witnessed a chasm, a divide between city policies and operations. I do hope that whatever new policies do come in the years and months coming forward, it actually reflects the operations of the city,” said Rafael.

Before Rafael left the podium, Dumont told the speaker he should set up a meeting immediately with the Park Board’s senior leadership team in the room.

At the time of writing, Daily Hive has not been able to reach out to Rafael, and several commissioners have stated they are unable to comment on what they deem to be a personal matter.

There is widespread condemnation of Dumont’s handling of the incident, and some have even suggested, possibly, that Rafael was using the public meeting platform as an option of last resort after making complaints through the usual human resources approach.

It’s important to allow freedom of speech. He is a park board employee but he’s also a resident of Vancouver. Shame on the chair of the Park Board saying repercussions for him speaking freely. Chair needs some legal advice prior to making those comments.

Unfortunately, I have first hand experience of when your union doesn’t step up and protect the worker’s best interest.

And it can be a crap shoot when it comes to the competence and desire of a manager to solve your personnel related issue.

I’m thinking he perhaps has tried to speak to someone.. and this is the only way to be heard. Again.. just my thoughts!! But wow!

They should have heard him out, thanked him for his contribution, asked him to provide details (in confidence), and reassured him that his input would be followed up. Wondering why did he need a public forum; was there not an employee contribution element to the process?

The comment from the #vancouver @ParkBoard @CityofVancouver saying “there could be repercussions” for a city employee sharing his experiences of #bullying and #harassment is appalling!

There is something rotten within the @ParkBoard So much is pointing to massive dysfunction and a terrible work culture.

There is something rotten within the @ParkBoard So much is pointing to massive dysfunction and a terrible work culture.

Repercussions for yourself! Whaaaat?!!! Did he really say that?!

If more people stood up in this way to racist municipal politics and systems – things would shift. I hope Jose (not sure of spelling) is doing well … what a fiercely kind person. He deserved better than this abrupt gate keeping from a table of white ppl.

Sounds like a dysfunctional workplace. He even got told there will be consequences for snitching by the board. Terrible

This certainly speaks to conduct, why was he shut down if he was speaking generalities then why, if going to use names then maybe.

So a white man is telling someone who states has been on the receiving end of racism from management of the Parks Board and all the man on the Board can do is threaten this student he could lose his job! Says who: The Board? What a bullying comment to make. For shame.

These weasels will do their best to sweep this under the rug and this poor guy will be the big loser in all of this at the end of the day. Let him be heard

Happy a light is being shone on this. And while Dumont suggests this has added some extra risk to his job, I'm hoping public support gets his grievances addressed and gut-checks his employer to be careful now that people are watching.

Park Board commissioners ended the agenda item, approving the Code of Conduct and the creation of an Integrity Commissioner to monitor the activities of the Park Board. The approval was made in a 5-2 vote, with Green, COPE, and Vision Vancouver commissioners in support, and NPA commissioners opposed.

NPA commissioners Tricia Barker and John Coupar took issue with the outgoing Park Board elected body making critical decisions on how the future makeup of the elected body, after the October 15 civic election, will operate. Most of the current commissioners will not be running again.

Coupar suggested the wording in the Code of Conduct further allows a majority party or coalition within the elected body to muzzle a minority, and that the Independent Commissioner’s term will last for only two years, with options for renewal.